The California Department of Fair Employment and Housing (CDFEH) sued the Silicon Valley tech giant Cisco Systems in June of 2020, accusing the company of discriminating against an Indian-American employee by allowing two managers, also of Indian origin, to harass him on the basis of his being from a lower caste. Cisco Systems is promising a vigorous defense, rejecting the claim of discrimination.

The CDFEH claim, however, goes beyond allegations of caste discrimination.

The complaint promotes anti-immigrant bias and false and dangerous stereotypes about Indian Americans that will perversely lead to increased targeting of and discrimination against Indian-origin, and particularly Hindu, workers.

1) CDFEH has blown a dog-whistle for anti-immigrant bigotry.

The CDFEH frames the beginning of its complaint in blatantly racist and anti-immigrant terms. It alleges that Indians are “significantly overrepresented” at Cisco, and implies that similarly qualified non-Indian immigrants are being ignored in hiring there and at other tech companies:

“Cisco has a significant overrepresentation of Asian employees compared to other companies in the communications, equipment and manufacturing industry (NAICS 3342) in the same geographic area, which is statistically significant at nearly 30 standard deviations. Such overrepresentation is also present in management and professional job categories….”

Such framing — that hordes of Indians are overrepresented, taking away American jobs —  is common rhetoric amongst anti-immigrant extremists and hate groups. It should never find sanction in a progressive state whose economy is significantly bolstered by its immigrant and foreign worker supported tech sector.

Predictably, news of the lawsuit is stoking a spate of xenophobic attacks targeting Indian and Hindu Americans. A recent story covering the case in Breitbart evinced  comments like these:

The CDFEH perpetuates dangerous and false stereotypes about Hindus and Hinduism.  The complaint states:

“As a strict Hindu social and religious hierarchy, India’s caste system defines a person’s status based on their religion, ancestry, national origin/ethnicity, and race/color—or the caste into which they are born—and will remain until death.”  (emphasis added)

In connecting caste and caste-based discrimination to Hindu teachings and practice, the CDFEH suit explictly defines and ties Hinduism to inequality.

The CDFEH’s assertion here is a clear violation of the First Amendment’s right to religious freedom, as the State is seeking to define the philosophy and practices of Hinduism for Hindus, rather than allowing Hindus to define their religion for themselves.

Such unconstitutional overreach by the State of California should be concerning for all Americans.

To make matters worse, not only are CDFEH’s actions unconstitutional, they are theologically incorrect.

Any assertion that caste discrimination is integral to Hindu teachings and practice is not only wrong, it trafficks in anti-Hindu hate (see here, here, and here).

Core Hindu sacred texts explicitly and repeatedly emphasize the equality of all humans and the inherent divinity of all beings. In spite of these teachings, and similar teachings found in other religions in India, caste-based discrimination, as defined and made illegal under Indian law, continues to exist.

The unique damage and danger posed to Indian and Hindu Americans as a result of the Cisco lawsuit is being compounded by bigoted rhetoric from certain activist quarters and activist-scholars. See, for example, how Vice News covered the story, quoting a law professor from Indiana who repeats the outright error and false stereotypes.

“What Modi is doing is pushing India toward a Hindu nation,”Brown said. “He’s doubling down on those Hindu beliefs, which untouchability is an aspect of it. India is beginning to embrace its Hindu traditions, which by definition leads to discrimination against Dalits because of the history of Hinduism.”

Untouchability is NOT an aspect of Hindu beliefs. And what Professor Brown and the article gloss over are compelling facts about caste dynamics and empowerment in India — namely, that Prime Minister Narendra Modi and President Ram Kovind both come from historically disadvantaged, so-called low castes.

CDFEH complaint goes on to say:

“At the bottom of the Indian hierarchy is the Dalit, typically the darkest complexion caste, who were traditionally subject to “untouchability” practices which segregated them by social custom and legal mandate.“ (emphasis added)

This statement promotes the blatantly false  perception that’s widely held in the West:  that colorism (and even racism) is a product of caste, and that the contemporary view of social stratification within India is somehow linked to skin color. It is not.

The conflation of caste with color is a direct product of a 19th-century racist European theory that claimed that light-skinned invaders, who would become the so-called ‘upper castes’, took over dark-skinned indigenous groups or ‘lower castes’ on the subcontinent, despite a complete lack of archaeological or genetic evidence supporting the claim. This theory also fit neatly with the British colonial project to justify rule in India (and around the world) over people of color as a superior light-skinned race.

This is not to say colorism, or a preference for fairer skin, is not a real fixation for many South Asians. One example is the multi-billion industry for skin-lightening patronized across countries and cultures.  Another is the Pakistani leadership’s perception of cultural superiority over their darker Bengali Muslim co-religionists in Bangladesh (formerly the eastern wing of Pakistan). These attitudes fueled, in part, the discrimination and marginalization of the Bengali population in the run up to Bangladesh’s independence struggle in 1971.

Bottom line: Colorism has nothing to do with Hinduism.

Equality Labs is an anti-Hindu hate group.  It denies the very existence of Dalit Hindus, who make up the lifeblood of Hindu society in India and throughout South Asia, and whose ancestors are amongst the most revered saints for all Hindus.

The organization and its allies have also testified to Hinduism being “an evil social construct;” have bullied and heckled young Hindu students and their parents who were testifying for greater equity and accuracy in the way Hinduism is taught in public schools; have attacked Hindu celebrations of sacred holidays; and have a track record of hateful and bigoted social media posts and public statements about Hindus and Hinduism (it uses Hinduism and Brahminism interchangeably). 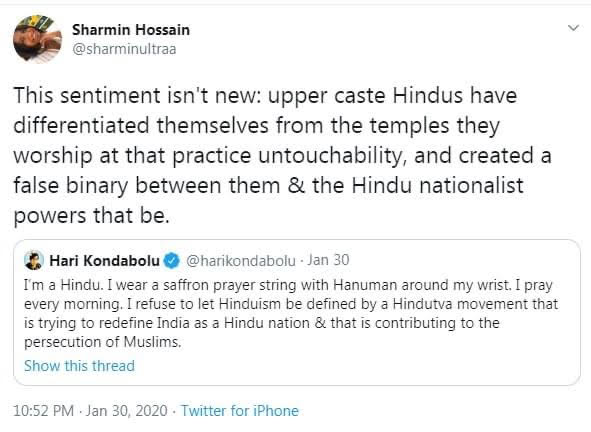 CDEFH and numerous media outlets reporting on the Cisco lawsuit are republishing statistics from a survey this group purportedly conducted two years ago to survey caste discrimination in the U.S. HAF’s analysis of the survey highlights significant methodological, statistical, sampling, and confirmation bias errors.

We do know anecdotally that the earliest waves of Indian immigrants to the United States came to pursue higher education, and were thereby likely to be from communities and families which had greater access to education and opportunity.

However, there is no reliable, independent data on the “caste” (as designated by Indian law) of immigrants coming to the United States from South Asia, nor attitudes towards caste identity, let alone caste-based discrimination.

The CDFEH Cisco lawsuit centers its professed anti-caste activism in deeply flawed, erroneous language that perpetuates the most dangerous stereotypes about Hinduism and its one billion global adherents.

Caste is not intrinsic to Hinduism. Caste is not color. Defining Hindu religious belief and practices for Hindus themselves is unconstitutional.

California must reject the claims and unverified assertions of anti-Hindu groups, such as Equality Labs, that first make the claim that caste is fundamental to Hinduism — then predicated on that false contention — target Hindus and their religion for claims of discrimination. To not do so, uniquely targets only Hindu Americans for policing and ethnic profiling in the pursuit of caste-related enforcement, and that too in the absence of any universally accepted understanding of what “caste” is..

In light of the CDFEH action and related media coverage parroting CDFEH’s anti-Hindu contentions that are unleashing waves of xenophobia and anti-Hindu vilification not seen in a generation, HAF has written to the CDFEH demanding redactions and revisions of the complaint.

California and all states should enforce existing anti-discrimination statutes.  But cultural awareness and competency training specific to South Asia and its religious traditions is a prerequisite.

The consequences of CDFEH religious illiteracy are all too clear.

NOTE: This post has been edited since its original publication.