The Invisible Roadblock to Religious Freedom: Why You Should Care About the Religious Worker Visa - Hindu American Foundation
On The Issues 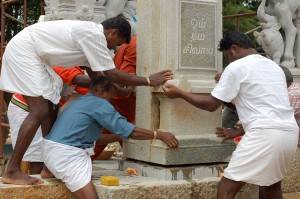 I am a Hindu. Like many Hindus in the United States, I spent my childhood accompanying my parents to temples, watching priests chant mantras, sing songs of praise, and lead us laymen in worship. These temple visits remained an important part of my childhood, and I looked forward to bringing my own children to the temple one day.

I am also a religious freedom lawyer. My first job out of law school was working for the ACLU, protecting religious minorities against government overreach. Throughout my legal career, I have hoped to realize equal rights of worship for Americans of every faith, including Hindus.

Unfortunately, these dreams must overcome an invisible roadblock to American religious freedom. Without Congressional action, many of us will lose access to our priests by the end of 2015.  Why? A vital provision in the Religious Worker Visa is set to expire.

The Religious Worker Visa is one of the most useful tools for houses of worship. It allows religious workers to secure temporary visas to work in the United States. While the visas can be used by ministers and non-ministers, it is the non-minister provision that is particularly important to the Hindu community. Unlike other faith groups, Hindus do not have the facilities to train religious workers in this country. While some Hindu groups are working to set up American seminaries, in general, our temples are dependent on the non-minister provision to be able to hire priests. Additionally, the provision allows new temples to be built, as trained religious architects, artisans, and sculptors can be brought in from India. Virtually all temples built and run in the United States can only do so because of this visa.

Unfortunately, this vital provision is set to sunset in September 2015. This sunset requirement, originally inserted to help ensure transparency in the program, has increasingly become a bureaucratic nightmare for houses of worship. While the program has been continually renewed since its inception in 1990, each new sunset date raises the risk of the program’s expiration. For the religious groups that depend on the visa, they are forced to hope for action from an increasingly unproductive Congress.

To be fair, it is an exaggeration to claim that our temples would cease to exist without the non-minister provision. Our religious communities are resilient and would likely adapt to the new restrictions. However, expiration would significantly limit our religious activities. Without religious architects, sculptors, and artisans, the community would be unable to build new temples or expand existing ones. Without priests, many temples would cease to function (while others would depend on the work of volunteers and part-time pujaris). The abhishekhams, pujas, homams, and archanas that the community has come to expect in temples would grow increasingly rare as trained priests become harder to find. Some temples would potentially close due to lack of staffing.

This is not a problem restricted to the Hindu community. The non-minister provision is liberally used by Catholics, Protestants, Orthodox Christians, Hindus, Jews, Muslims, Sikhs, Buddhists, and Scientologists, among others. In our increasingly global world, it is hard to find a faith group that wouldn’t be affected by the sunset.

Fortunately, there are signs of progress. In the comprehensive immigration package passed by the Senate last June, lawmakers included a provision repealing the sunset from the non-minister provision. This legislation is mirrored in H.R. 4460, the Freedom of Faith Act, introduced by Rep. Mike Honda (D-CA) with the support of a diverse group of faith leaders, including the Hindu American Foundation.

As a Hindu and a religious freedom lawyer, the fight to save the non-minister provision is undoubtedly personal. However, any individual, regardless of faith, who cares about protecting religious freedom should be plugged in to this debate. Our Constitution may guarantee the right to worship, but the right is meaningless without access to temples and priests. It is up to us, as American citizens, to ensure that our First Amendment guarantee of religious freedom remains a practical reality, that our children can continue to enjoy access to temples as we do. H.R. 4460, and similar legislation, will help ensure this promise.