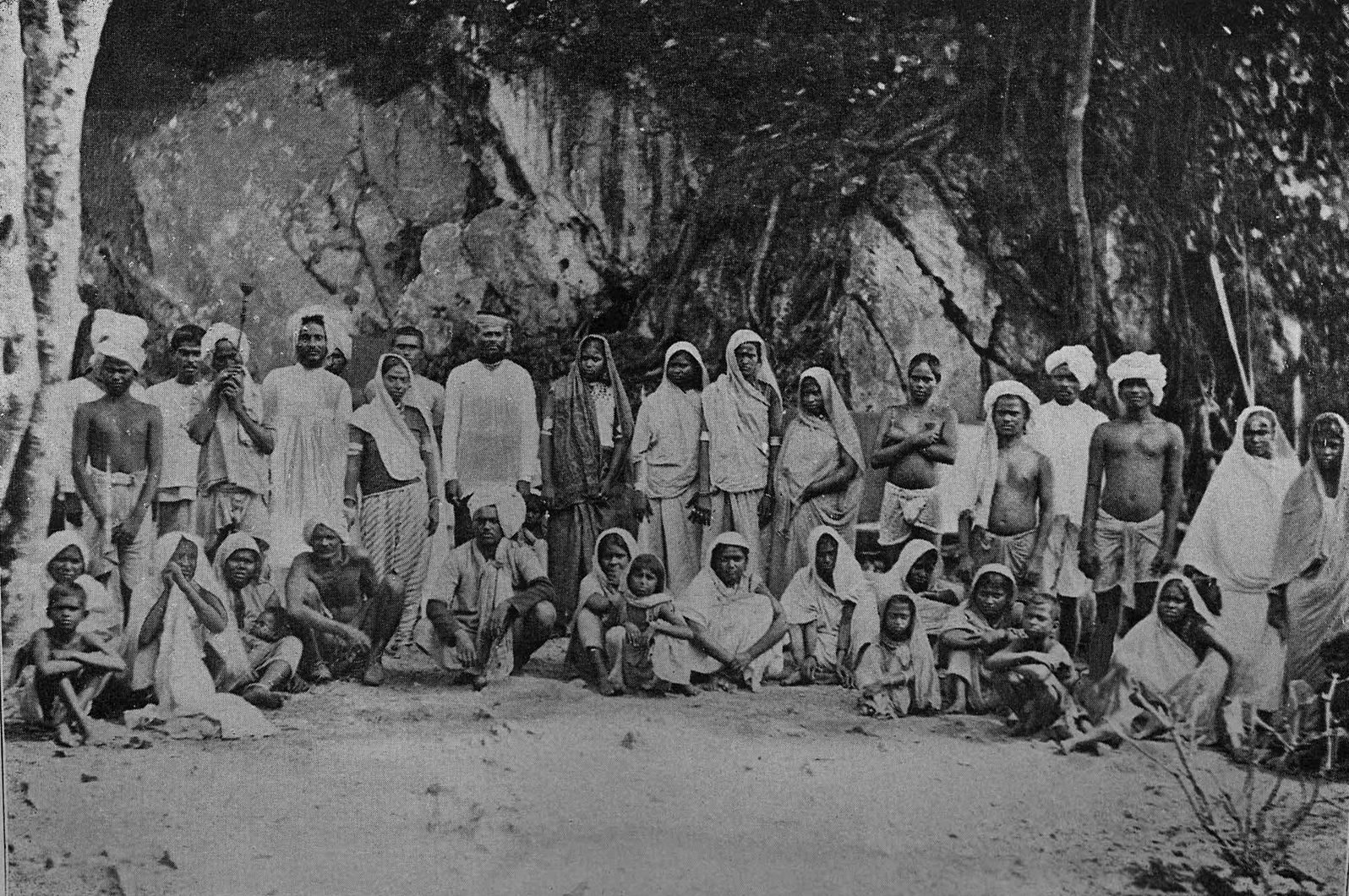 The voyagers of the ship Fath-al-Razak caught first sight of Trinidad and Tobago on May 30, 1845, and not a moment too soon, for the journey across what they called the Kala Pani, or black waters of uncertainty, had been a long and perilous one.

Three months spent in cramped and depressing conditions, with frequent outbreaks of cholera, dysentery, measles, and typhoid, was enough for the more than 200 passengers to feel relief and excitement at the prospect of their journey’s end.

But these feelings were not without trepidation.

Before setting sail from the harbor of Calcutta, the travelers — made up of farmers and laborers — had seen little of the world beyond the United Provinces of British India, and under normal circumstances, would probably have been content to keep it that way. Oppressed by a stringent system of taxation, during a time of drought and famine, however, left them with little choice: they would have to find a new kind of life, or likely die.

When thus presented by the Caribbean’s British colonizers — who had lost most of their African workforce after the Slavery Abolition Act of 1833 — the opportunity to work the sugar plantations in a faraway land, it was not one that could be summarily dismissed, even if it meant leaving behind the only life they had ever known.

And so it was in this mind that Trinidad and Tobago’s first set of Indian workers docked at the Port of Spain, taking their first steps into a world of indentured servitude.

Of course, they were far from the last.

From 1845 to 1917, the ships would continue to arrive, carrying, during that time period, over 140,000 Indians to the island. Unfortunately, this “new life” was not exactly the greener pastures the British told them it would be.

With meagre wages (25 cents per task), and a tendency for the British to not honor their end of agreements, the Indians found themselves living and working in oppressive conditions, making them the plantation’s new form of subjugated labor.

Yet, despite such trying conditions, they showed a will and tolerance, born not only of their hardships, but of the light and strength that came from their faith, which, among them, was predominantly Hinduism.

After a long day’s work in the harsh tropical heat, they would gather in the island’s barrack housings, pulled to each other by the powerful spiritual force of their motherland. As the setting sun cast long shadows across the island before disappearing behind the horizon, the songs connected to the legends of India’s spiritual heritage could be heard in stirring strains, carried into the night air by the thundering rhythm of drums.

Of these various legends, none was more important than that of Prince Rama, whose victory over the powerful king Ravana — signifying good over evil, knowledge over ignorance, and spiritual light over darkness — helped provide the inspiration the transplanted people needed to continuously persevere. As such, traditional dances and enactments related to Rama and his pastimes also took form, making clear to any who witnessed that the strength of India’s spiritual culture transcended the boundaries of state, and prevailed in the darkness of adversity.

Sadly, however persistent this culture appeared, the British did not take it very seriously.

By 1870, the Indians had proven to become the foundation of Trinidad’s sugar industry, and had also shown proficiency in other areas of work, especially when they were given the opportunity to acquire their own land after the five-year contract of indentureship was up.

Still, they were generally looked down upon as a people, classified by the British as uncivilized pagans, whose customs and traditions were considered backwards and clannish. This inevitably resulted in a number of social and economic challenges that took its toll on the immigrants’ ability to properly preserve and grow their religious practices.

Prominent among these challenges was the state’s refusal to recognize Hindu marriages until 1945 — the first 100 years of Indian existence in Trinidad — even though the ceremonies were performed by pundits in front of entire villages. The government, instead, dictated that only marriages performed at the warden’s office and of a Christian nature would be deemed legally valid.

This meant that surviving wives of non-Christian marriages would have no legal right to claim property, and that children born of such marriages would be considered illegitimate and would also be denied the same rights in regards to inheritance.

The marriage system thus became a means by which the state converted thousands of Hindus — who had no desire to forfeit such rights — to Christianity. And for those who didn’t adhere to the state’s dictated ceremonies, it’s estimated that at present-day prices, Hindus lost at least 2 billion dollars worth of property to the government.

The repression of Hindu growth by Christian conversion was further implemented through education.

Until the 1940s, no state funding was given for Hindu schools, and therefore many Indian children were not formally educated in the ideals of their spiritual heritage. Instead, their only avenue of education was provided by Christian missionaries who required them to convert. And because education was the only means of social mobility, many of them did.

Recognizing the gradual degradation of their culture, the leading Hindus of Trinidad knew something needed to be done.

Under colonial rule, they had for so long been dubbed an inferior race, with many made to even believe it themselves. Inspired, however, by Gandhi and India’s nationalist movement, the Hindus of Trinidad felt a renewed pride in their culture, and the determination to restore and preserve it.

This inspiration became all the more galvanizing when India finally gained its independence, rousing the emerging intellectual middle class of Trinidad’s Hindus to found, in 1952, the island’s largest Hindu organization, the Sanatan Dharma Maha Sabha.

Considered Trinidad’s greatest and most effective organization in terms of Hindu communal development, the SDMH’s council of pundits began addressing the island’s disjointed Hindu practices by coordinating temple activities and standardizing the procedure of rituals.

Knowing that education was key in establishing and maintaining the integrity of the faith from one generation to the next, as well as providing a non-Christian route of social advancement, the SDMH not only built temples, but as many as 31 schools throughout the island in just four years. It even published literature to be used at all of its affiliated centers to ensure the uniformity of its teachings and practices.

The SDMH is now officially associated with 13 early childhood centers, 48 schools, more than 150 temples, and over 200 pundits.

The state of Hindu affairs also improved significantly over the last 50 years as Indians in Trinidad became involved and successful in politics. Some notable names include Basdeo Panday, who was the first Hindu Prime Minister of Trinidad and Tobago, holding the office from 1995 to 2001, and Kamla Persad-Bissessar, Trinidad and Tobago’s first female Prime Minister, who held the office from 2010 to 2015.

Today, there are roughly 240,000 declared Hindus in Trinidad and Tobago, comprising about 18 percent of the island’s population, and if one were to visit, the presence of this population would be potently witnessed.

Jhandi flags of different colors — all of which represent a particular god or goddess worshipped in a family temple — fly in the courtyards of Hindu homes, as if declaring to all that the spiritual culture of Trinidad’s first Indians continues to exist in a powerful way.

And beyond the home, a total of about 300 temples dot the island, welcoming all who wish to enter, as the communities surrounding these temples regularly organize many of India’s most beloved Hindu festivals, including Ganesh Chaturthi, Diwali, Ram Navami, Dussehra, and Holi.

Indeed, when the first set of indentured workers voyaged across the waters of uncertainty, they knew little of what their future would hold. But thanks to their pioneering spirit, and the determination, resilience, and perseverance of their descendants, Hindus have been able to preserve their traditions, and will continue to do so going forward.