Dogs and Diwali? 5 things to know about Hinduism and hu(man's) best friend
EducationThings To Know

Dogs and Diwali? 5 things to know about Hinduism and hu(man’s) best friend

By Syama Allard November 3, 2021 No Comments 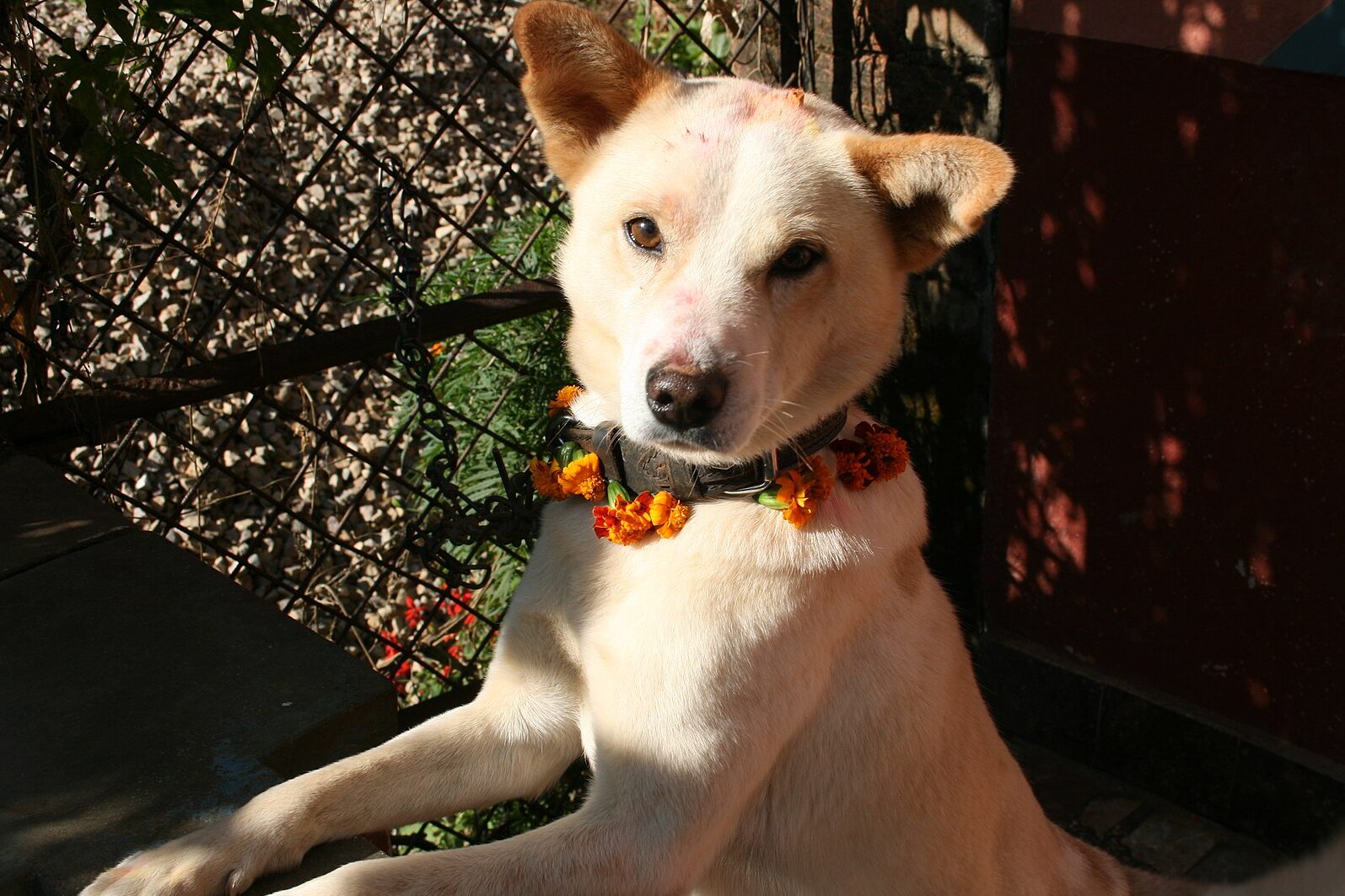 When it comes to Hinduism’s outlook on dogs, the truth is made clear — they are honored to the point of even being celebrated. Recognized for their loyalty, service, companionship, and the special relationship they have with humans, Hinduism’s reverence for dogs is expansive, as they are worshiped in festivals and appreciated in connection to a number of Hindu gods and stories.

1) Tihar and the dog festival

The most notable celebration of dogs within Hinduism occurs during Tihar, a five-day festival analogous to Diwali, but with some significant differences.

Observed particularly in Nepal, Bhutan, and the Indian states of Sikkim and West Bengal, Tihar places special emphasis on the worship of the creatures related to Yamaraja, the God of Death. As such, the second day, known as Kukar Tihar, honors dogs, which are often depicted alongside Yamaraja as the guardians of his abode. Also believed to be messengers that help guide the spirits of the deceased across the River of Death, Hindus convey an appreciation for dogs on Kukar Tihar by decorating them with tika and powdered dye, and giving them flower garlands and good meals.

Taking the opportunity to appreciate dogs on Tihar can have a powerful effect that goes beyond a single day. By deepening our connection to man’s best friend, we can cultivate a more positive relationship with death, knowing that we won’t be alone when the time comes for us to move on to the next phase of our journey.

2) Yudhisthira and the dog he would not leave behind

One of the most well-known Hindu stories involving a dog occurs towards the end of the Mahabharata, when Yudhisthira, his brothers, and the queen Draupadi decided to retire from their rulership, renounce their kingdom, and ascend to the heavens.

Yudhisthira led the party as they gave up their home and began the trek to the Himalayas. Accepting only simple food and water throughout the journey, they walked for months, absorbed in a consciousness of asceticism and detachment.

Making their way to the foothills of Mount Gandhamadana, a dog appeared and joined them as they began their ascent up the mountain. Going with them as they climbed higher and higher, it watched as Draupadi suddenly fell dead, followed closely by each brother — all except for Yudhisthira.

Understanding that it was their individual moral shortcomings that had made them fall on the path to the heavens, Yudhisthira continued on, and the dog continued with him, never leaving his side.

As he and the dog approached the summit, Indra, the king of the heavens, appeared before him in a chariot, and told him to climb aboard so he could take him to heaven. After being assured that he would be reunited with Draupadi and his brothers soon enough, Yudhisthira asked if the dog could come as well. When Indra refused his request, however, Yudhisthira decided not to go. Because the dog had taken shelter of him, he would not abandon it.

Upon finishing his determined declaration, Yudhisthira became stunned when the dog suddenly transformed into Yamaraja, who extolled the renounced king for his unequaled virtue, and subsequently encouraged him to go on to heaven.

Thus mounting the chariot, Yudhisthira left with Indra, having cemented his virtuous legacy, as well as the ancient bond between dog and man.

3) Indra and the dog named Sarama

Perhaps the earliest mention of dogs in Hinduism centers around Sarama, the “female dog of the gods” who was famously asked by Indra to retrieve a herd of cows that was stolen by a group known as the Panis.

Narrated in varying detail depending on the version, the story goes that the nimble-footed Sarama traveled far and wide, using her heightened skills and senses to track down the thieves. Eventually discovering them in a mountain cave, she confronted the Panis, who in turn tried to bribe her. Rejecting their attempt, however, she went on to reveal the location of their hideout to Indra, who proceeded to liberate the cows by force.

As a traveler and seeker who does not wish to possess, but rather find what has been lost, Sarama is described as having found the Pani’s hideout by treading the “path of truth.” Exhibiting determination, loyalty, and immense intuitive powers, her role in rescuing the docile and innocent cows highlights her as a symbol of a mother’s fiercely protective nature.

By connecting with dogs — all of which are considered Sarama’s children — one can better tap into such nature, which acts as a powerful tool in expressing empathy, love, and compassion.

4) Dattatreya and his four dogs

The symbolic significance of dogs continues to run deep throughout Hinduism, as notably highlighted in portrayals of the Hindu god Dattatreya.

A sannyasi (monk) avatar described as a wanderer of the forest, Dattatreya is famous for his spiritual wisdom. Just as a dog’s alert and receptive nature enables it to discern phenomena beyond common perception, Dattatreya is said to have gained spiritual enlightenment through keen awareness of his natural surroundings, including the air, sky, earth, and water.

The symbolic import of dogs is further driven in connection with Dattatreya, as he is commonly depicted with four of them, which are often said to represent the following:

Though exuding an inherent positivity, dogs can also have a wild nature. As such, the dogs of the mind can be volatile and dangerous to a man who has not learned to control the senses. When the senses are tamed through discipline towards renunciation, however, as exemplified by Dattatreya, these dogs can become man’s best friends, aiding him in his quest for ultimate spiritual perfection.

5) Kala Bhairava and his dog

In Hinduism, Shiva is known as the God of Transformation, whose divine cosmic dance of destruction paves the way for a new universal creation. Thus embodying the qualities of such devastating nature, Kala Bhairava, whose name means “terrifying blackness of time,” is a fierce manifestation of Shiva who, like time, brings inevitable change.

While this menacing form of Shiva is described as being “dark and frightful,” he is actually a guardian, bringing security and protection through the often tumultuous process of transformation. The guardian aspect of Bhairava is amplified by his fierce and menacing dog, which acts as his vehicle, carrying him wherever he wishes.

Appealing to his affinity for dogs, devotees feed and care for the animal as a way of attempting to invoke Bhairava’s presence, who they hope will destroy the enemies of their spiritual advancement, such as lust, greed, and anger.

Of course, whether Bhairava actually decides to appear or not, the mere act of experiencing the sweet and simple-hearted nature of dogs has an undeniable way of automatically uplifting us, thereby decreasing our negative spiritual impediments.

And only by decreasing such impediments can one undergo a true spiritual transformation.