A bad book on India leads to an opportunity.

My Diwali Story by Tejus Shah

When my 7 year old daughter brought home a book on India from her school’s library, I was excited to see she wanted to learn more about her heritage. She’s a smart kid, reads well, and absorbs the information. What was seemingly a basic book on facts about India turned out to be anything but simple.

A few days before Diwali, she starts to read the book, but approaches me for help pronouncing a number of unfamiliar words. She asks if I could just read it to her, so I oblige. After the brief general introduction, the book proceeds to the history of India. The main image on the page is that of a large statue of Buddha. I’m now slightly on guard. Where are the images of Shiva or Vishnu or Ganesha? 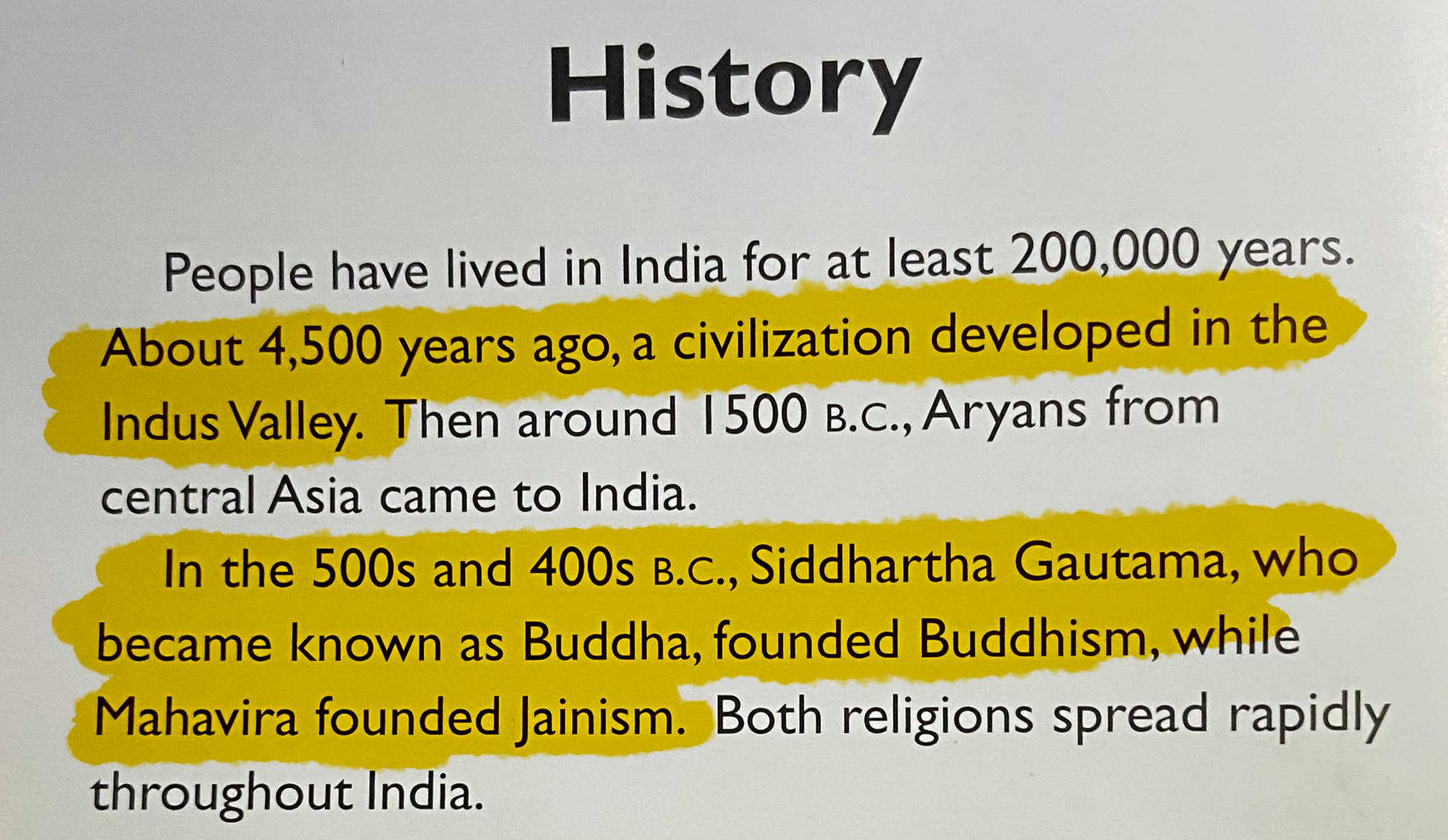 In the first four sentences presented as Indian history, nearly 5000 years of Hindus and Hinduism are completely dismissed and ignored. The book speaks only of the influence of Buddhism and Jainism, from 500 B.C. onward.

I stop reading aloud but flip through the rest of the book. With each turn of the page, my disgust and anger increases at how awful this CHILDREN’S book is. In fact, the first mention of Hindus refers to Hindu nationalists as the sole bad actors of the region.

It continues to present India as a country stuck without progress. It tells of an India in which most people don’t have cars or telephones, in which most Indians work as farmers who live in villages with houses made of mud and straw, and about how most of the population is uneducated.

I tell my daughter that this book has many issues and that I need to do something about it. I instruct her to bring the book back to school the next day. Her teacher would know why.

That night, I send an email to her teacher as well as the vice principal of the school. I include photos of some of the pages, outline the problematic language, and explain why the book was highly offensive and inaccurate. I also explain who I work for and that I would be happy to provide alternative materials that are more accurate. Finally, I share a link to HAF’s Diwali Toolkit as Diwali is just two days away.

The next day, I receive a call from the school. It’s the vice principal.
They are pulling the entire series of these books.

He’s very appreciative of my concerns and thanks me for bringing them to his attention. He informs me that they are working to revamp their process of reviewing library books, but also rely on input from folks like us.

Shortly after, I receive ANOTHER call from the school. This time, it’s my daughter’s teacher. After seeing HAF’s Diwali Toolkit, she asks if I’d like to come into class and do a presentation. So, the day after Diwali, I came into her class with HAF’s Diwali Toolkit. I also read Binny’s Diwali to the students. 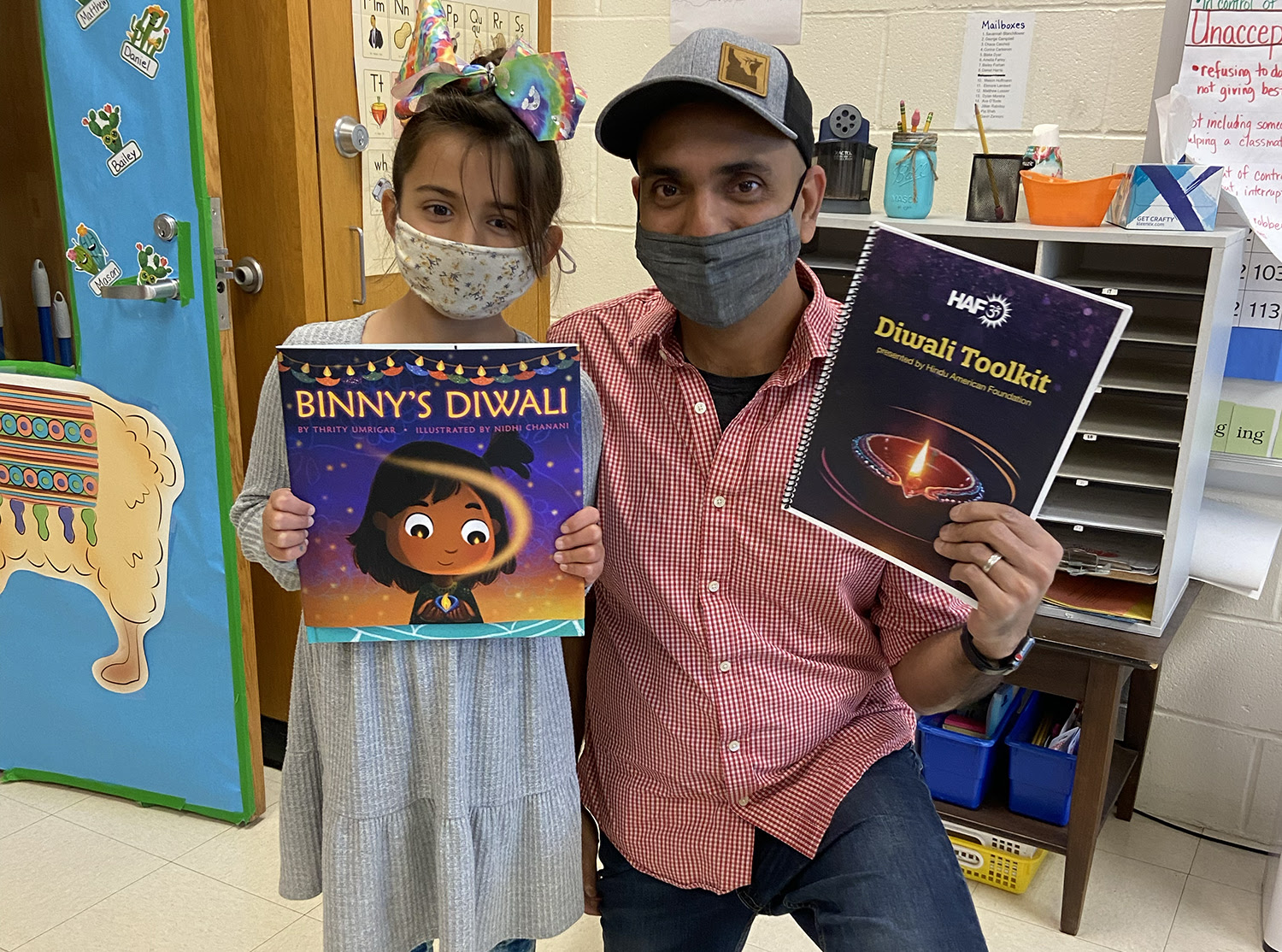 With the quick response from the school’s faculty and administration, my story ended on a positive note… but many others go by without resolution. It is incredibly important for our community to be aware of how our heritage, faith, and culture are being presented in schools. It’s also up to us to speak out about the inaccurate presentations because no one else will.

The work we do is only made possible with your support.

I tell this personal story not only to bring attention to something our community faces, but also to highlight the incredible work HAF does for the Hindu American community. And the work we do is only made possible with your support.

Without your donations, our toolkits and other educational resources would not be available.

Without your donations, our team would not be able to fight against the Hinduphobic rhetoric on display in higher education institutions.

And without your donations, we would be left simply as a backwards stereotype.

P.S. My daughter was super excited having me speak to her class 😍
P.P.S. In the spring, I’ll be presenting HAF’s Holi Toolkit to my daughter’s class!