Religious Freedom in Bangladesh 1971-2021: From Genocide to Today 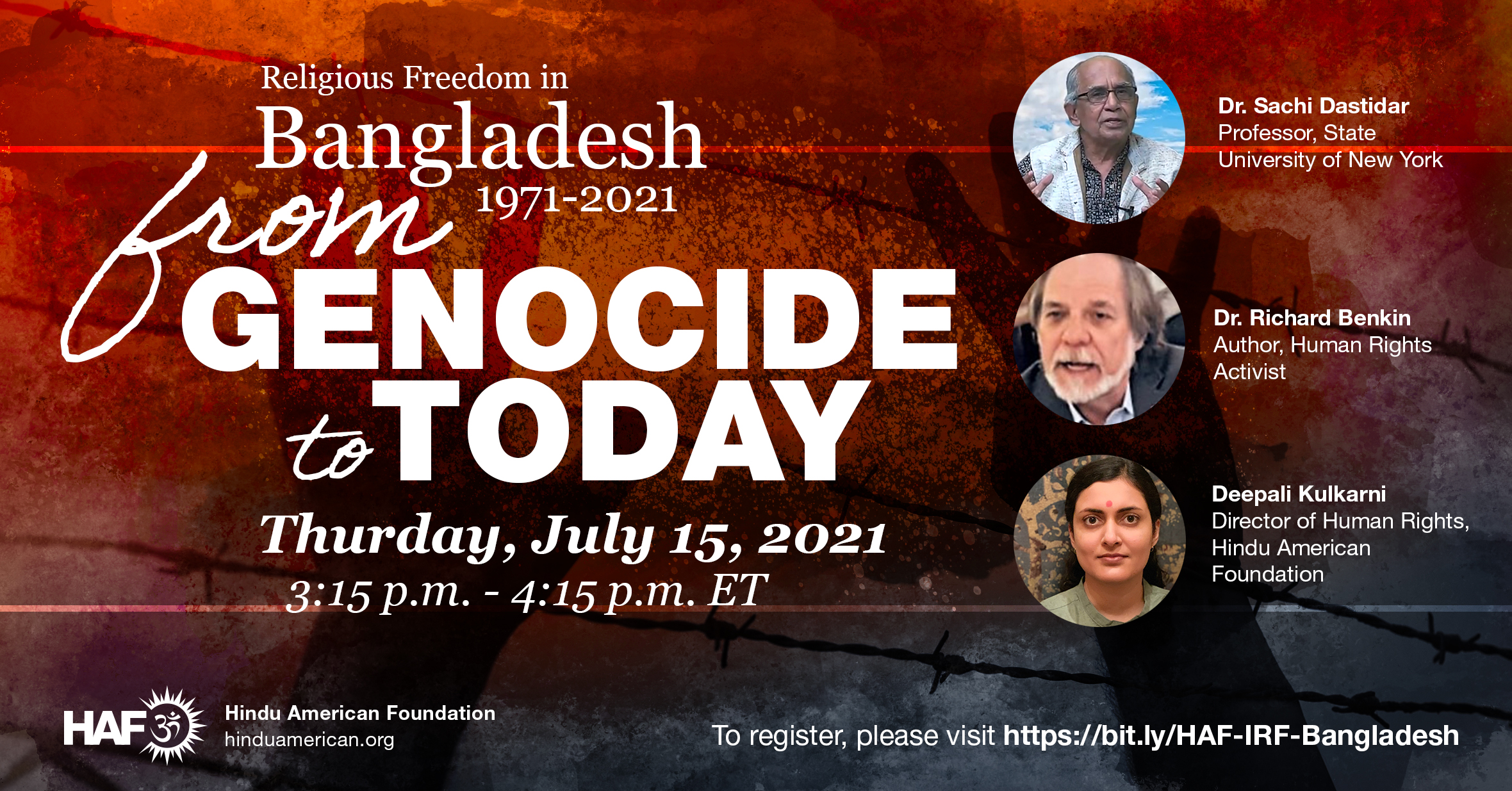 Religious Freedom in Bangladesh 1971-2021: From Genocide to Today

Guests will hear from an expert panel of speakers who will discuss the 1971 genocide and its ramifications today, how Bangladesh turned away from its secular constitution in 1988 and declared Islam its official state religion, and the status of Hindus, Buddhists, Christians and other religious minorities in Bangladesh today.

This event is being held as part of the International Religious Freedom Summit taking place in Washington, DC July 13-15, 2021.

This event will be held in person and will be webcast via Zoom and on the HAF YouTube Channel. Participants who register and attend via Zoom will be able to participate in the live Q&A.

Deepali Kulkarni  holds an MA from the University of Hawai’i at Manoa, an MSt from Oxford University, and an MPhil from Syracuse University. She was a 2018 recipient of the Fulbright-Nehru student research award, with which she studied gendered religious practice in India extensively.

Dr. Richard Benkin is one of the foremost activist-scholars currently working to save Bangladesh’s declining Hindu population. His on-the-ground research and activism in religious freedom and defending persecuted minorities in Bangladesh has led him to testify and present his findings before Congress and relevant US government agencies over the years. He is distinguished writer and author of “A Quiet Case of Ethnic Cleansing: the Murder of Bangladesh’s Hindus,” which provides verified evidence of anti-Hindu atrocities in Bangladesh, the government’s complicity in them, and the rest of the world’s deliberate silence. Dr. Benkin holds a doctorate from the University of Pennsylvania and has held a number of faculty and business positions. He sits on several boards and committees, and regularly serves as an expert witness in US asylum cases involving South Asian refugees before the US government.

Dr. Sachi G. Dastidar is a Distinguished Professor of the State University of NY and the Founder and Chairman of the Board of the Indian Subcontinent Partition Documentation Project. He comes from a refugee family from Pakistan/Bangladesh, and has devoted his life’s studies to the partition of India, and subsequent changes in India, Bangladesh, and Pakistan. He now helps 33 schools for the poor and orphaned in Bangladesh and India, and has built 14 schools and dorms there. He is the author and editor of over 22 books and journals, several of which cover the 1947 and 1971 partitions, and has authored over 150 articles and lectured in three partitioned nations. He holds a Bachelor’s degree in Architecture, Calcutta University, India, M.C.P. (City Planning), Indian Institute of Technology, Kharagpur, India, and a Ph.D. from Florida State University.

Taniel Koushakjian is the Director of Public Policy for the Hindu American Foundation and currently serves as the Chairman of the International Religious Freedom Roundtable’s South Asia Working Group. Prior to joining HAF, Taniel worked as a political consultant and was a candidate for the Palm Beach County Commission. He spent over a decade successfully advocating on Capitol Hill on a wide array of human rights, international religious freedom, US foreign policy, and appropriations issues. Taniel was selected as a 2018-2019 Fellow with the Anti-Defamation League Glass Leadership Institute, as well as a 2019 Fellow with the James Madison Institute. He holds a B.A. in Political Science from Florida Atlantic University, as well as an M.A. in Political Management and a Graduate Certificate in PACs & Political Management both from The George Washington University.