Our reputation is on the line & we will defend it

UPDATE, MAY 7: On May 7, 2021 due to a lack on compliance with the cease and desist notices sent on April 19, the Hindu American Foundation filed a lawsuit in US District Court for the District of Columbia against Hindus for Human Rights co-founders Sunita Vishwanath and Raju Rajagopal, Indian American Muslim Council executive director Rasheed Ahmed, Federation of Indian American Christian Organizations of North America chairman John Prabhudoss, and Rutgers University professor Audrey Truschke, for defamation and conspiracy to defame the Foundation.

HAF’s complaint also outlines how the defendants used the US-based Coalition to Stop Genocide in India to provide cover to make further defamatory statements against HAF and demand the US government start an investigation into HAF and other Hindu organizations for allegedly using Federal funds to “sponsor hate” in India.

Professor Truschke, who has worked closely on a number of occasions with IAMC, HfHR, and Sadhana — all organizations controlled or operated by the other defendants — went on the republish and amplify the defamatory statements, while falsely accusing HAF of organizing violent threats against her.

Truschke and IAMC’s advocacy director are both listed as board members of another Coalition to Stop Genocide in India member organization.

Listed as a non-party to the lawsuit but as a co-conspirator to defame HAF is the author of one of the Al Jazeera articles, Raqib Hameed Naik.

HAF’s complaint shows that Naik, rather than simply being an independent journalist, as presented by Al Jazeera, has deep and ongoing connections with both IAMC and HfHR, speaking at events jointly organized by both organizations and serving on IAMC’s executive team.

Following publication of both defamatory articles Naik was listed as a speaker for “News and Media Outreach” at an IAMC quarterly planning meeting discussing advocacy and media strategy.

HAF is seeking compensatory and punitive damages from the named parties; a permanent injunction against further dissemination of the defamatory statements; a public retraction of the Al Jazeera articles; and, payment of HAF’s legal fees.

Want to support our fight for the truth?

WHAT LED TO THIS LAWSUIT

On Monday, April 19, the Hindu American Foundation sent five cease and desist notices to organizations and individuals who have made libelous statements against HAF, published in two articles by Al Jazeera in the first week of April 2021.

Receiving the legal notices are: Hindus for Human Rights co-founders Sunita Vishwanath and Raju Rajgopal, Rasheed Ahmed of the Indian American Muslim Council, and Federation of Indian American Christian Organizations’ John Prabhudoss, as well as both the author of one of the Al Jazeera articles, Raqib Hameed Naik, and Al Jazeera as an organization, have all been sent demands for retraction and apology.

In addition, Rutgers-Newark Associate Professor Audrey Truschke was served with a cease and desist notice due to her amplification of these libelous articles on social media, along with a pattern of her own defamatory statements about HAF. Truschke recently posted on social media the libelous accusation that HAF and members of its Board of Directors coordinated a campaign of violent threats against her and minorities living in India.

All the above have been given 24 hours to retract their statements and issue public apologies. Should they choose not to reply, HAF will pursue further legal action. We can no longer idly sit by while these organizations and individuals blatantly spread lies and falsehoods about who we are and what we stand for.

Want to support our fight for the truth?

HAF is an independent organization funded by individuals like you

We are not beholden to or funded by any foreign organization or government.  Our financials are independently audited each year and available on our website.  Our transparency has earned us a Platinum Seal on Guidestar. Our positions are rooted in dharma, not in politics or popularity.

HAF is a voice for Hindus.

Speaking up for persecuted Hindus in Pakistan, Bangladesh, and Kashmir does not make us Hindu supremacists. It makes us an actual Hindu human rights organization.

Speaking out against anti-Hindu legislation does not make us a Hindutva lobbying group.  It makes us a Hindu advocacy organization.

Upholding the richness of our ancient tradition does not make us Hindu nationalists. It simply makes us Hindu.

We expect the folks above to play hardball. They will play their usual victim card and call us Hindu bullies every chance they get. This is not just about HAF.  This is for our community.  We must show that we will challenge false accusations of Hindu American groups having dual loyalties and funding or promoting acts of violence.

We aren’t backing down. Stand with us and support the truth.

Samples of libel against HAF 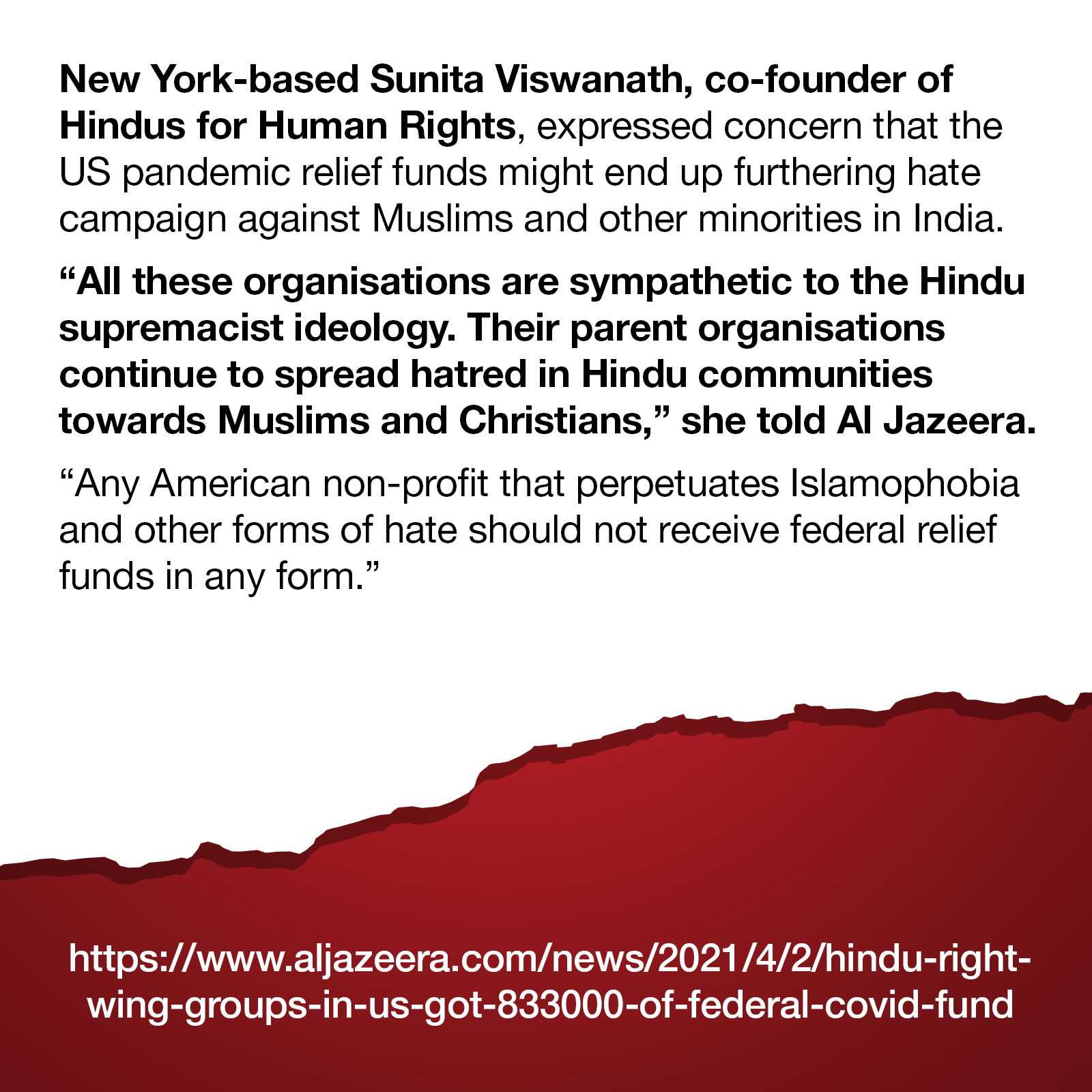 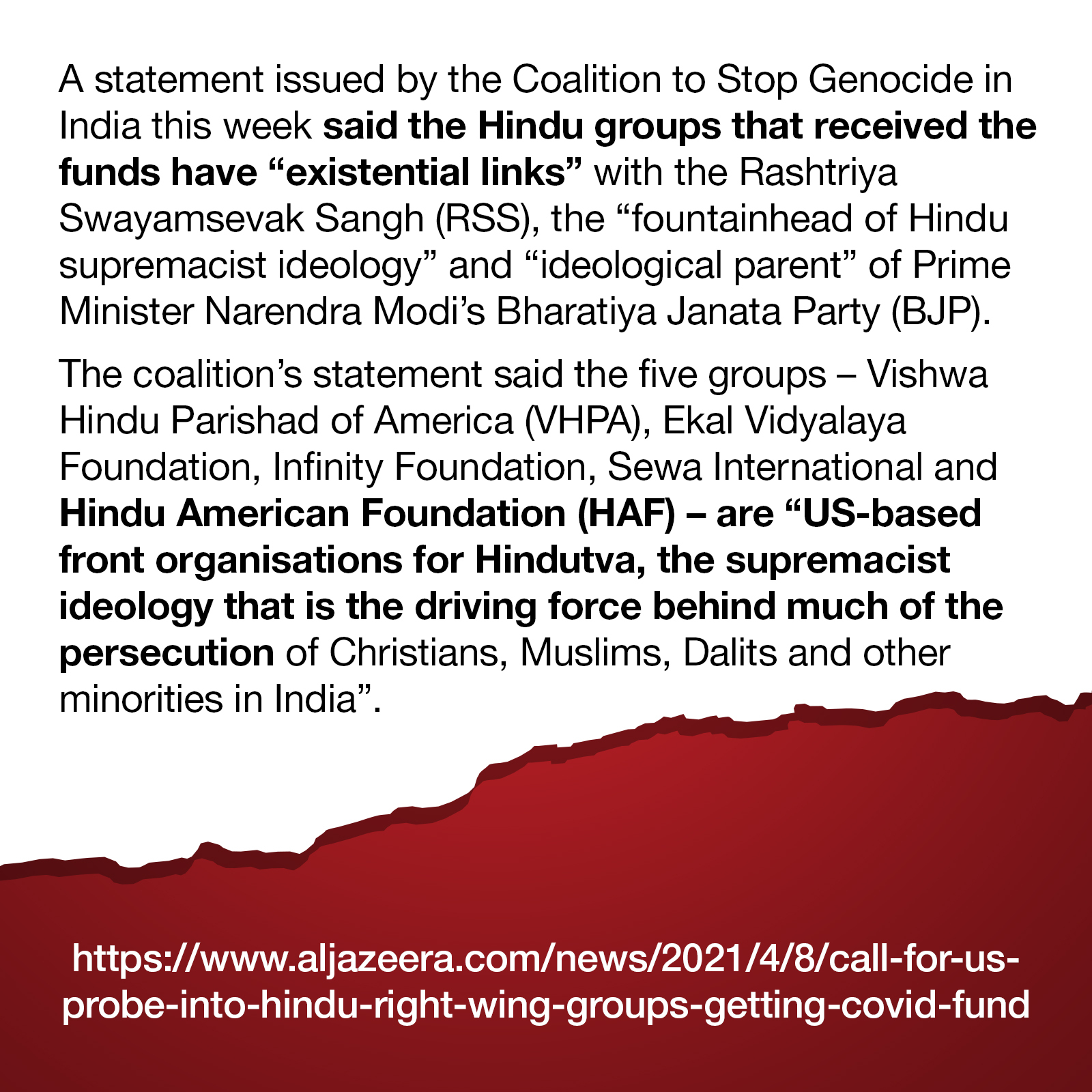 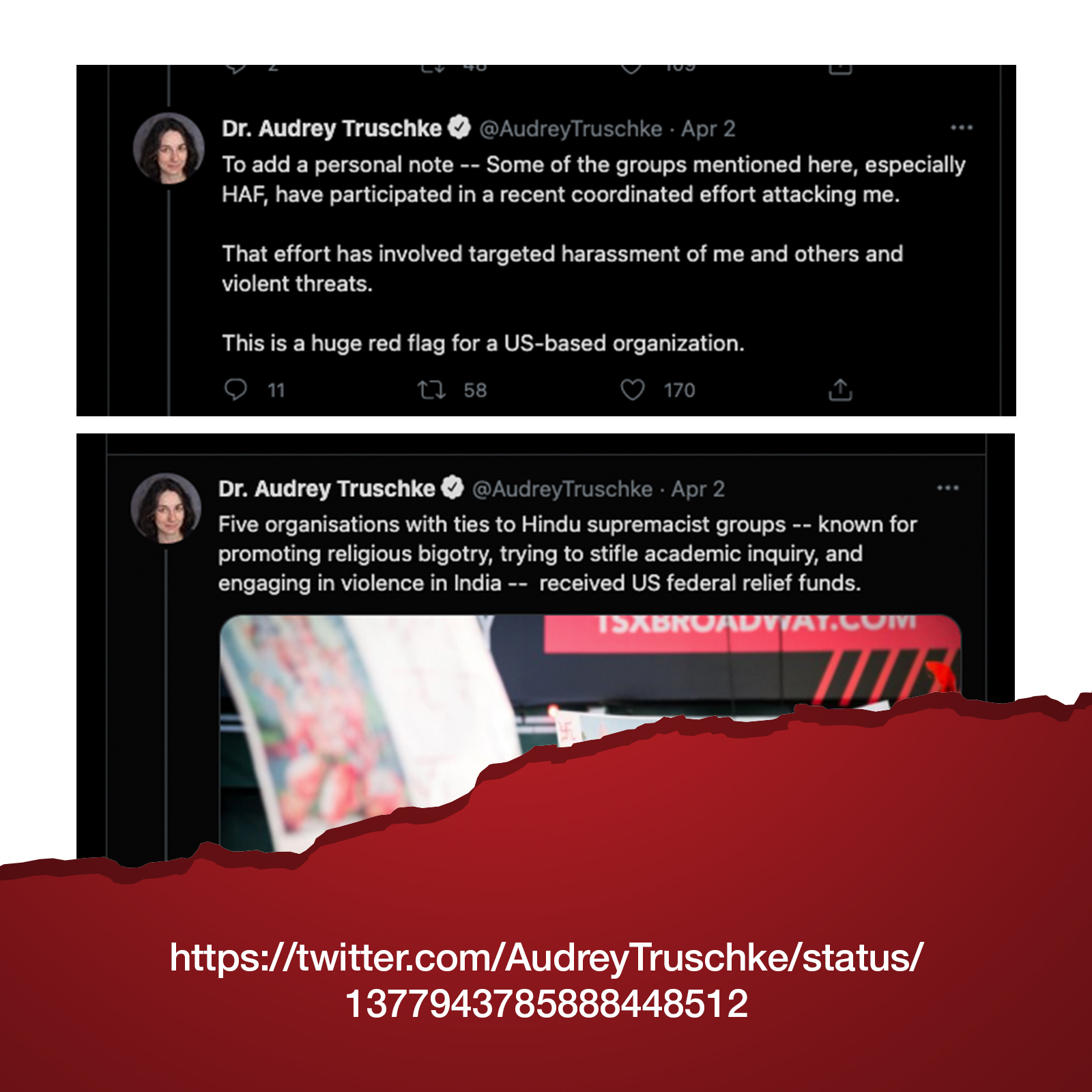