In Hinduism, marriage joins two individuals for the purpose of jointly pursuing the four aims of life: dharma, artha, kama, and moksha

In Hinduism, marriage joins two individuals or embodied, eternal souls for the purpose of jointly pursuing the purushartha or four aims of life: dharma, artha, kama, and moksha. Marriage is considered a spiritual partnership which unites the minds, bodies, and souls of the partners in this and future lives, and builds sacred bonds between their two families.

Many elements of the Hindu wedding ceremony have remained virtually unchanged for thousands of years. The ceremony consists of a series of rituals and ceremonies to promote righteous living and the sharing of values such as selfless love, kindness and compassion, honesty and fidelity, and mutual respect. The rituals are originally in Sanskrit, the mother of all Indian languages.

There are many elements and rituals both before and after the actual wedding ceremony, which vary by deity tradition, linguistic region, community, and family.  While these vary from community to community, two of the more common pre-wedding ceremonies are the haldi (also known as a pithi) ceremony and the mehndi ceremony.

The haldi ceremony is a ritual in which a mixture of turmeric (haldi), oil and water are applied to both the bride and groom prior to the wedding. Family members will wipe the mixture on the couple and offer their blessings and ward off any evil spirits so that they can start their new life obstacle free.

Another popular ceremony is the mehndi (henna) ceremony, which occurs a day or two prior to the wedding ceremony. In this ceremony, the bride is decorated on her hands and feet with henna powder which is wet when applied but dries to an orangish-red stain. It said that the deeper the color of the bride’s mehndi, the happier the bride and groom’s marriage will be. Bridal mehndi designs often incorporate ornate thematic designs of well wishes, joy, and love. Often, the groom’s name is usually hidden somewhere in the intricate patterns and game rules dictate he must find it. While traditionally, mehndi was reserved for the bride and the women in her family, it is now common to see the groom also get a bit of mendhi as well.

Wedding rituals embrace the five elements of nature: fire, earth, water, air and ether, and include invocations to the Divine, followed by vows. It is conducted in the presence of a sacred fire, representing the God of Fire (Agni). Agni exists as a divine and impartial witness to the vows taken by the bride and groom and symbolizes the light of knowledge which is the key to everlasting happiness.

There are significant items used in Hindu wedding ceremonies that hold particular symbolism:

While many of the rituals may involve family elders or the women of the household, Hindu priests generally perform the actual marriage rituals.

The following are common segments to a Vedic ceremony:

The bride’s mother welcomes the groom, often with a vermillion forehead marking (kumkum tilak), waving of a diya, or earthen lamp on a decorative plate, a small offering of jaggery or sugar, sprinkling water and rice in all directions. The groom will then step onto a clay vessel crushing it to pieces, assuring the parents that he has the ability, strength, and determination to overcome all obstacles that the couple may face in their married life. 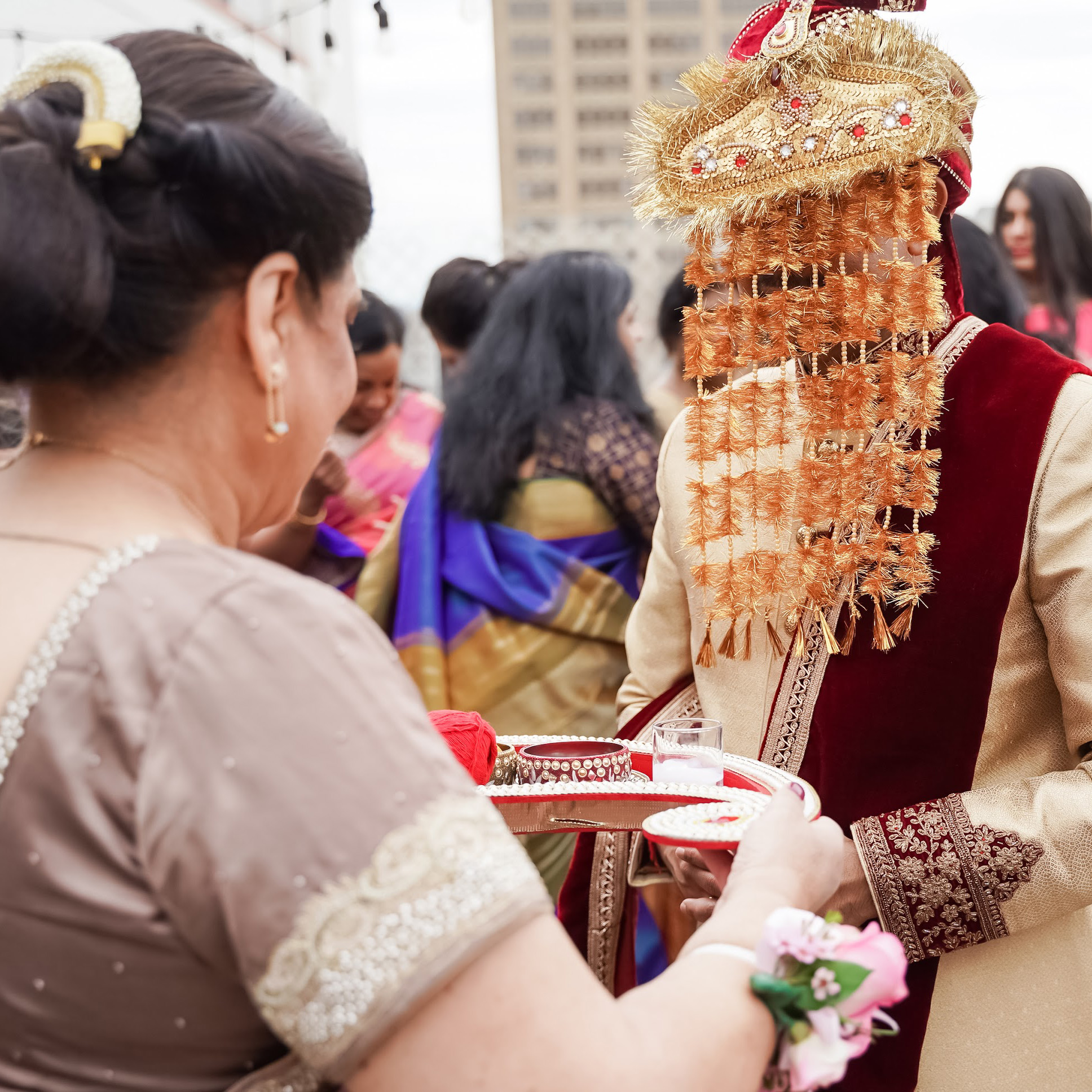 Ganesha Pujā – Prayers to the Remover of Obstacles

Nearly every rite of passage, weddings being no exception, begin with an invocation to Lord Ganesh, the Remover of Obstacles and embodiment of knowledge and auspicious endeavors. This ceremony invites him after symbolically purifying the surroundings and ritual participants. Rice, flowers, and fruit may be offered as a sign of hospitality and worshipful respect to the deity. 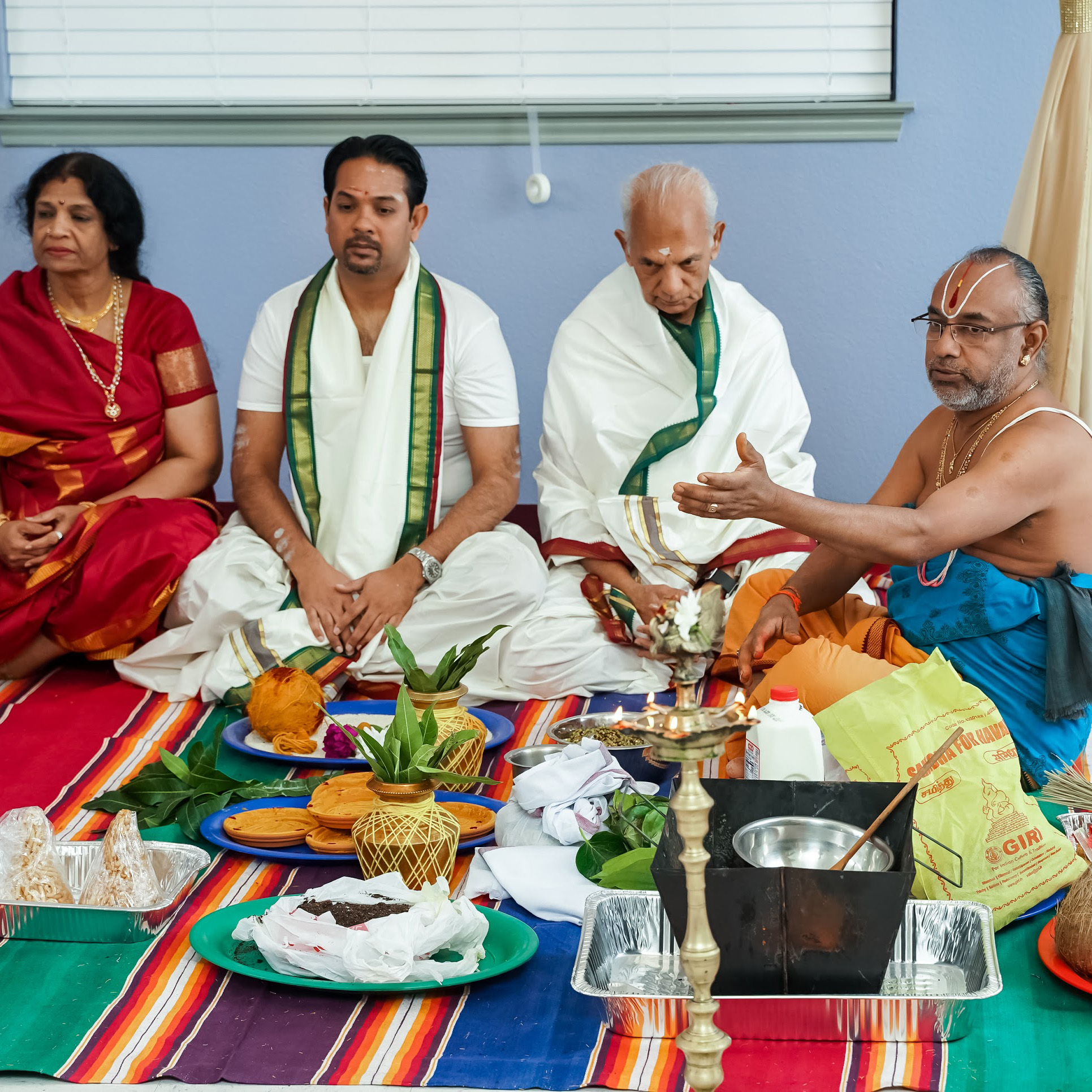 A kalash is a copper pot which is filled with water and often topped with leaves and a coconut. The priest invokes water, from all rivers and oceans, which is purified with Vedic mantras and used throughout the ceremony. This is followed by the worship of the five elements of Creation. 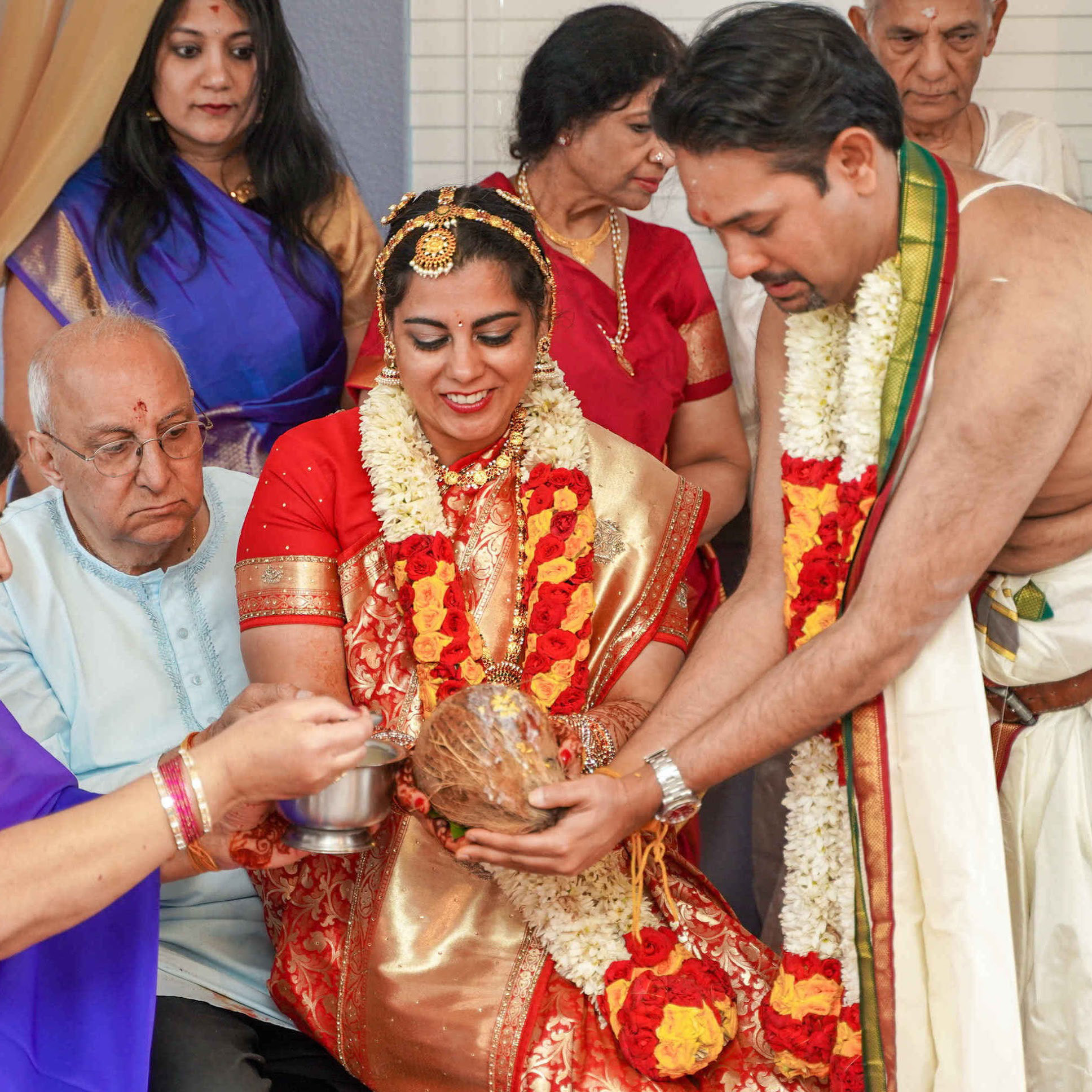 The bride is escorted to the mandap (altar). A mandap, which is a wedding canopy with four poles, represents a variety of things including the Purusharthas, the four stages of life, the four walls of a home, and the four parents of the couple, without whose support, love and blessings, the marriage would not have come to take place. Traditionally, the mandap is built of wood or bamboo and decorated. Decorations may range from simple garlands of flowers and banana leaves to embroidered silks and intricate mirror-work. 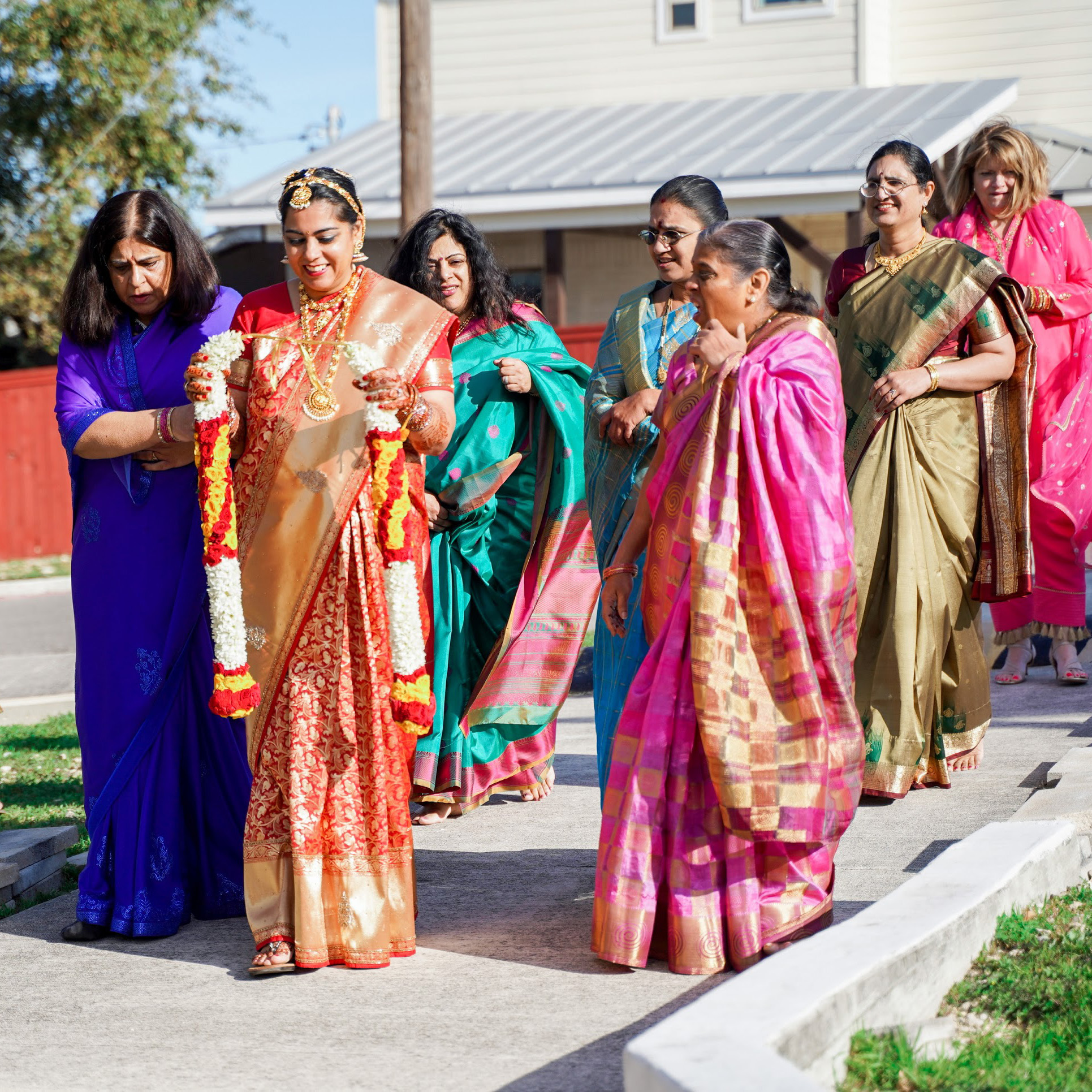 The antarpat (curtain) is held in front of the groom, signifying that the bride and groom are still two independent individuals and mangalashtakam (sacred hymn) is recited. The antarpat is then removed, and the couple exchange garlands in a ritual called Jaimala to symbolize their acceptance of one another. 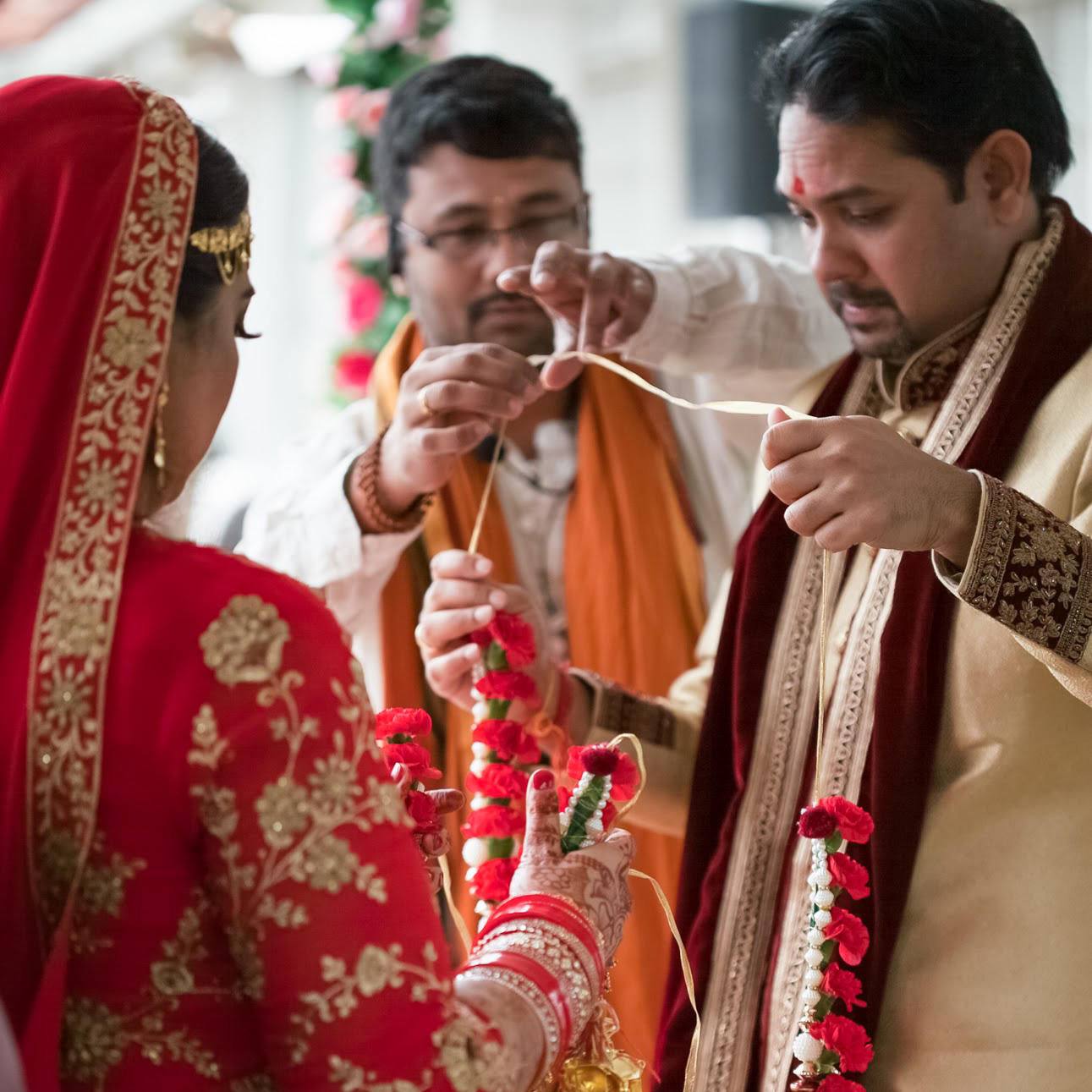 The bride’s parents give their daughter’s hand in marriage to the groom and request him to take care of her as his life-long partner. 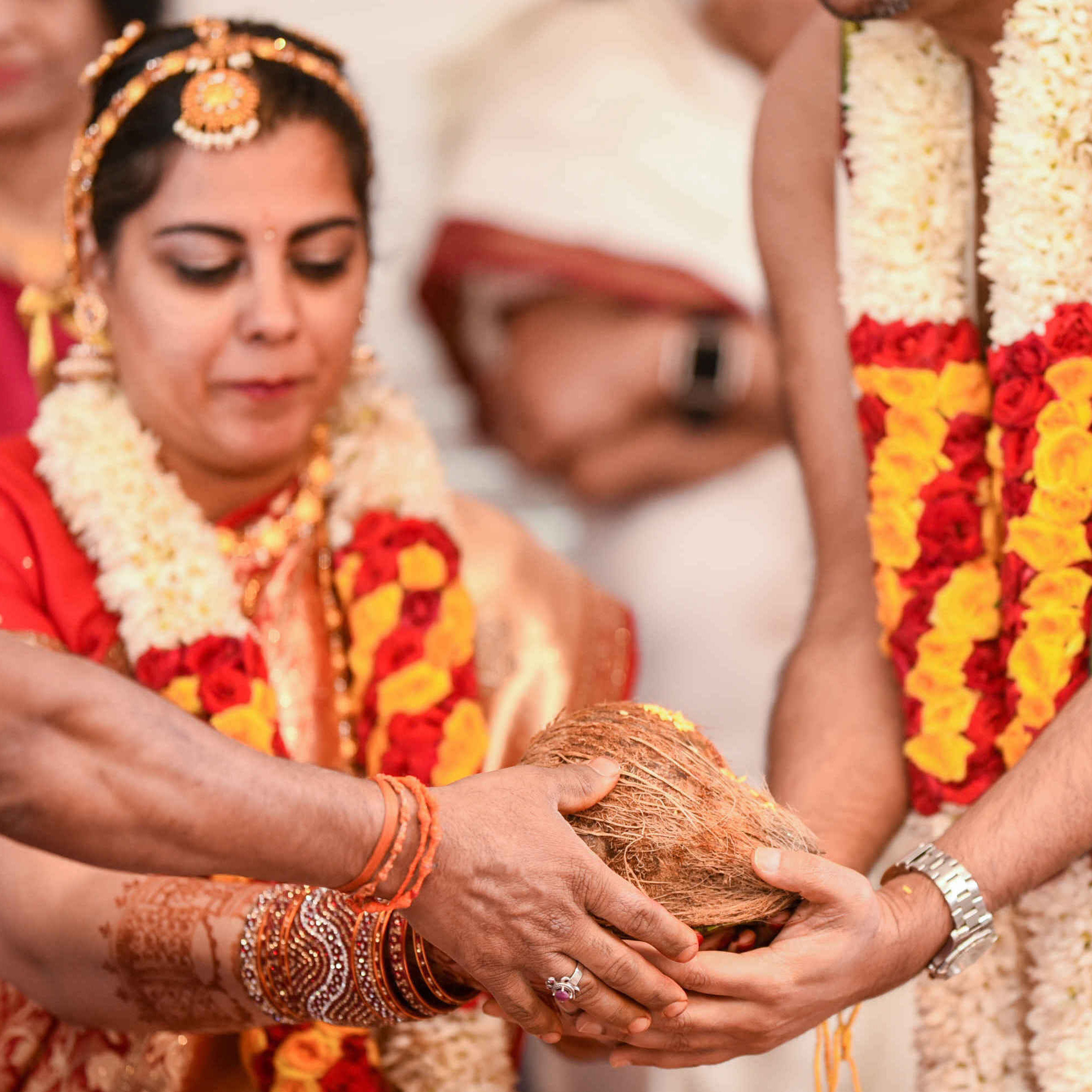 A garland with 24 threads is placed on the bride and the groom by the parents to endorse their union.

A lace is tied to garments of the couple to signify unity.

The priest lights the fire invoking the presence of Lord Agni as the impartial witness to the ceremony.

Both the bride and groom walk in a clockwise direction four times representing the four goals of life:

Traditionally, the groom leads the bride in the first three rounds. The bride, representing Shakti, the Divine Energy, leads in the last round. At the end of each round the bride’s brother or cousin brother gives offerings for the fire. The first three represent the material wealth of cows, silver, and gold. The last offering represents the gift of the bride herself to her new family. At the end of the ceremony, the bride stands to the groom’s left, where she has taken a place closest to his heart.  Hindu couples from particular regions make seven rounds which include the four described above as well as one for harmonious life and healthy progeny, another for purity, strength, and the last for blessings for devotion, companionship, and unity.

The bride and groom take seven steps together to signify the beginning of their journey as husband and wife. They promise: 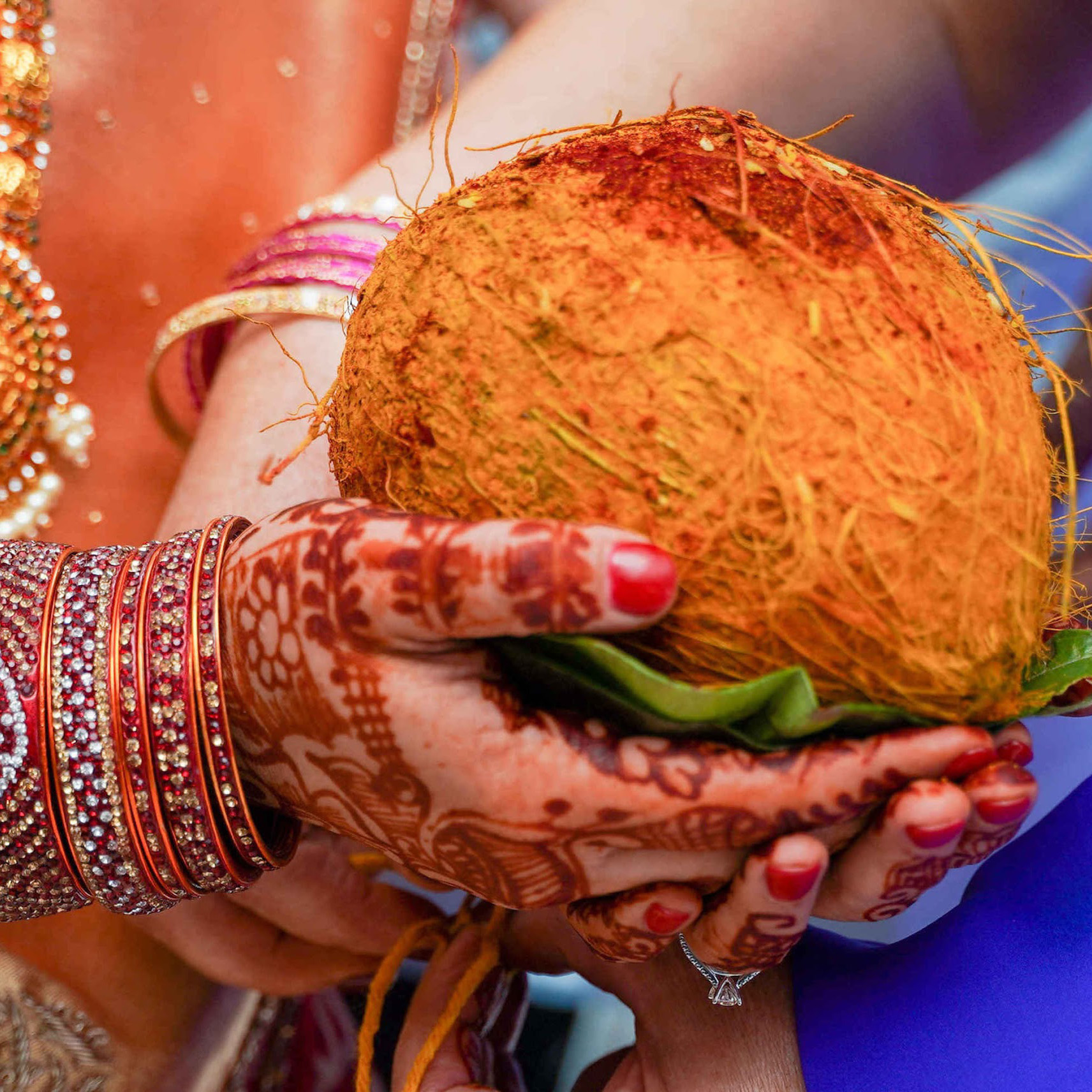 The groom applies sindoor (vermillion) to the bride’s forehead and welcomes her as his partner for life. The groom also offers her a mangalsutra (a sacred black bead necklace). The bride and groom are now united and seek the blessings of Lord Vishnu (the Preserver) and Goddess Lakshmi (the Goddess of Prosperity and Well-being).

The priest and the families bless the newlyweds.

This is optional and up to the discretion of the bride and her family. This symbolic ceremony facilitates the progression from a bride to a wife. 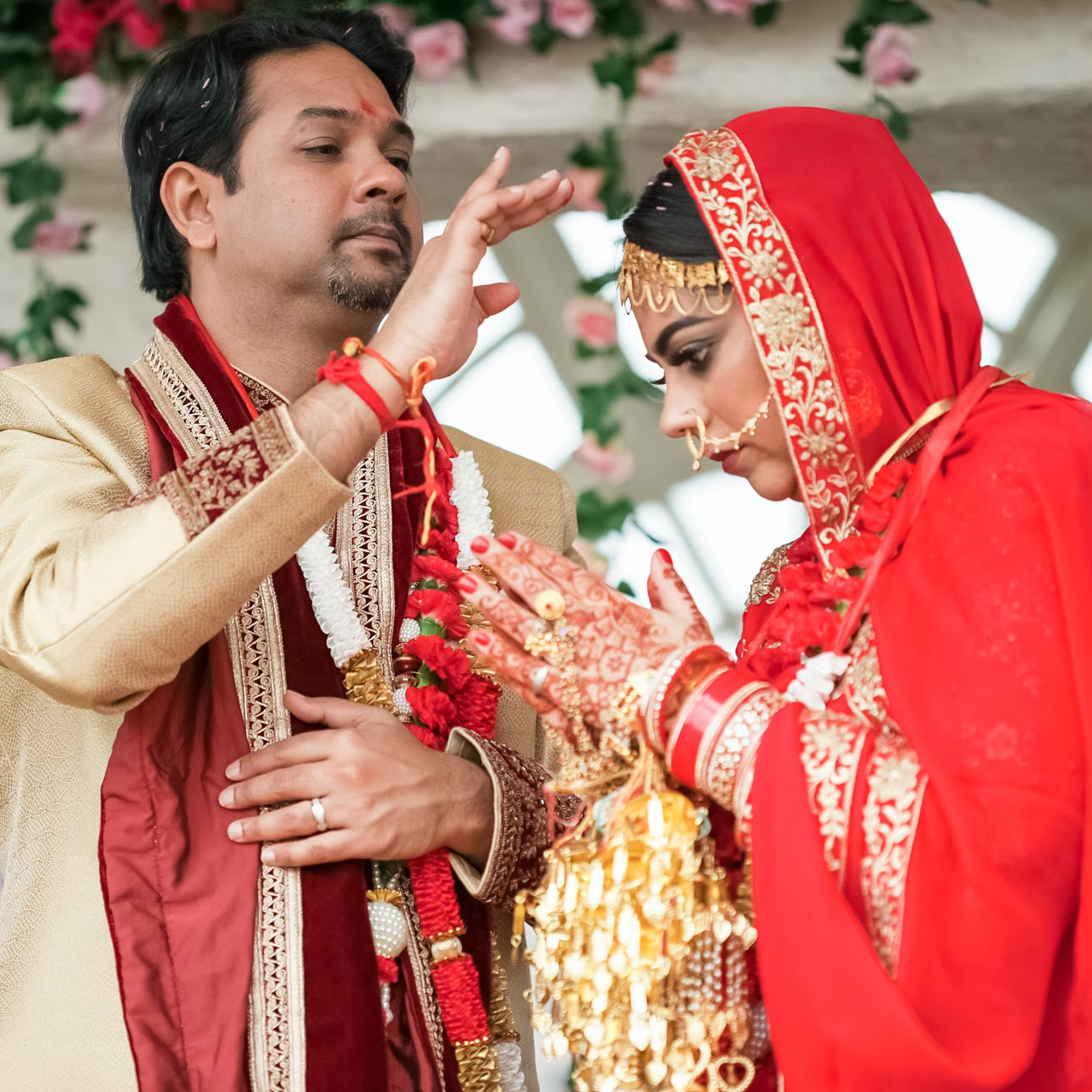 Marriage is not a contract and is considered one of the sixteen traditional sacraments (samskara). As such the concept of divorce does not exist. That said, Hindu sacred stories from the Mahabharata to the Puranas and other texts and oral traditions to texts describing local customs of the time (dharmashastra) speak of couple’s separating and remarrying.

Different regions of India have specific customs that are often seen in wedding rituals. Many of these may be more cultural in nature. The colors worn by the bride or accessories worn or carried by the bride and groom may vary by region and community as well.