How is the nonviolence of Gandhi and MLK still relevant today? Reverend James M. Lawson, Jr. and Dr. Veena R. Howard have some answers - Hindu American Foundation
On The Issues

How is the nonviolence of Gandhi and MLK still relevant today? Reverend James M. Lawson, Jr. and Dr. Veena R. Howard have some answers 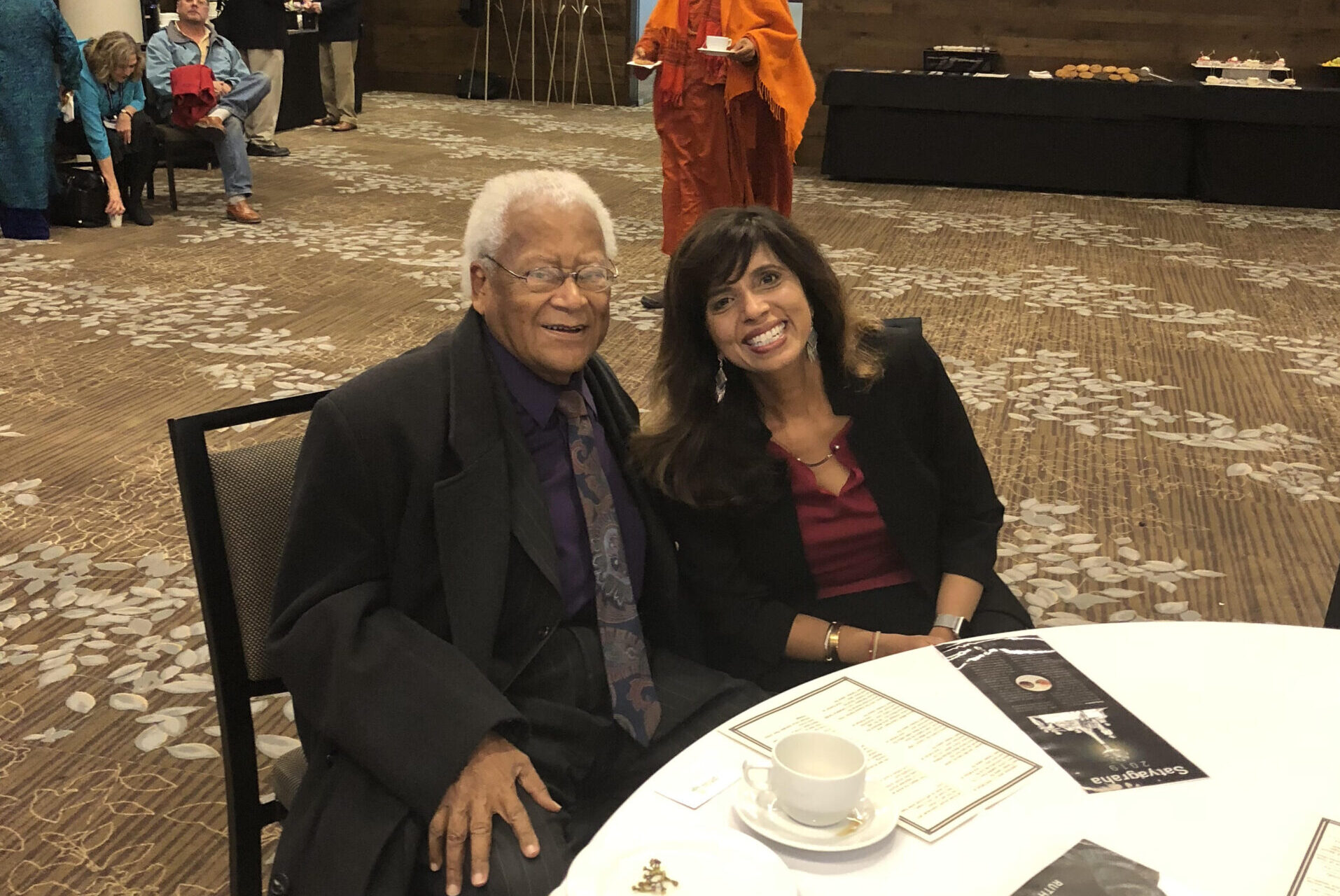 Lawson and Howard photo taken at the World’s Parliament of Religions, 2018 ©

Dr. Veena Howard is an Associate Professor of Asian Religious Traditions in the Department of Philosophy at California State University, Fresno. An accomplished scholar of Mahatma Gandhi’s philosophy of nonviolence, she is amongst the most qualified who can authoritatively speak on not only his life, but how he might respond in today’s social climate.

HAF: Mahatma Gandhi’s political philosophy was deeply informed by the Bhagavad Gita, which holds, in places, ahimsa as the highest value. Yet, it also calls for Arjuna to fight his own kin for the benefit of dharma. Did Mahatma Gandhi see a role for violence in the quest for justice? What, in his view, were the limits of nonviolence?

Dr. Howard: Mahatma Gandhi considered the Bhagavad Gita as his “infallible guide” and looked to its guidance in his personal life and public work. Gandhi wrote a commentary on the Gita to address his fellow Hindus who raised similar questions. His favorite verses were the 19 verses from chapter 2. The Gita’s vision of a wise person in the verses (2:56, 57) “…who is free from passion, fear and wrath,” and “who owns attachment nowhere, who feels neither joy nor resentment whether good or bad comes his way…” guided Gandhi’s personal conduct. Gandhi was aware of the war context of the Gita, and Lord Krishna’s efforts to broker peace between the Kauravas and Pandavas. For him, Krishna’s call to Arjuna to fight the war was not a question of violence or nonviolence, but rather of action or inaction. He argued that the Mahabharata war ends in the massacre of millions on both sides, and the sorrow of King Yudhisthira at the loss of his loved ones (including his own sons). Gandhi concluded that the Mahabharata is a text showing the futility of violence. He was careful in defining nonviolence: “The fact is that ahimsa does not simply mean non-killing. Himsa means causing pain to or killing any life out of anger, or for a selfish purpose, or with the intention of injuring it. Refraining from so doing is ahimsa.” This interpretation was consistent with the Gita’s teaching of rising above hatred, anger, and ill will toward anyone, including one’s oppressor. Just as Lord Krishna advised Arjuna to do his duty as a warrior, Gandhi believed that in certain contexts, to confront the forces of violence and injustices, “manslaughter may be necessary in certain cases,” only to save more lives. He wrote in Young India: “Suppose a man runs amuck and goes furiously about with a sword in hand, killing any one who comes his way, and no one dares to capture him alive. Anyone who dispatches this lunatic will earn the gratitude of the community and be regarded as a benevolent man. From the point of view of ahimsa, it is the plain duty…” Gandhi substantiated his philosophy “to act towards others as we would towards ourselves” in the Gita (6:29).

Dr. Howard: Gandhi was against all types of hate and violence. He was against the partition of India and Pakistan, which resulted in the massacre of innocent people. In any violent situation, people of both sides suffer. He believed that hate cannot be overcome by hate. He looked to the Gita, which emphasizes the underlying unity of all beings. In today’s world, we as world citizens have to think in terms of our common humanity. Gandhi was aware that prejudices based on ethnicity, religion, gender, etc., have the potential to perpetuate the cycle of pain and suffering. He practiced the teachings of the Bhagavad Gita which focuses on fighting the inner demons of hate and anger.

HAF: Gandhi taught that the potency of nonviolent resistance stemmed from a person’s internal spiritual resolve. Such a resolve gives a person the ability to turn the other cheek, not out of weakness, but out of forgiveness, even if a loved one is beaten, jailed, or killed. It was this forgiveness, he said, that truly changed a person’s heart. Do you think Gandhi would maintain this position in the face of today’s social climate? And if so, would it be as effective as it was during his time?

Dr. Howard: Gandhi showed that the law of nonviolence was for all times. Especially in today’s social climate, it is important we realize the value of truth-force and soul-force. He discovered nonviolence as a potent method of secure justice and peace and developed strategies and tactics, including civil disobedience, protests, marches, and non-cooperation. These methods have been wielded all over the world to defy structures of violence. Gandhi’s nonviolence was active, not passive. The leaders of the civil rights movement and movements across the world have shown that nonviolent direct action is effective. The Rev. James M. Lawson, who was inspired by Gandhi, understood “the love that Jesus taught and practiced was not a mere personal virtue, but that it was social and collective virtue.” MLK was also influenced by Gandhi and he wrote in 1958, “We had to make clear that nonviolent resistance is not a method of cowardice… The method is non-aggressive physically but strongly aggressive spiritually.” In today’s world, Gandhi’s teachings of resistance through nonviolent direct action and efforts to stand up for what is right, what is just, can help build just and harmonious communities. A realization of our wrongs, understanding our common humanity, and fighting for injustices would help heal the wounds of pain and violence inflicted on various people and communities.

Dr. Howard: Gandhi was a brilliant PR person and a clear communicator. He used journalism, spoke at large meetings, and held daily prayer meetings in his later years in order to mobilize his movements. Gandhi would argue against hate speech and all violence that is perpetrated through social media. He was against the unbridled use of technology, and he would recommend that people use social media to spread and build nonviolent and just societies. Gandhi and other leaders used various platforms to disseminate their ideas, and they also understood the effects of violent words and hateful rhetoric on the real lives of people.

Reverend James Lawson Jr. is an American Civil Rights leader who spent three years in India during the 1950s studying Gandhi’s nonviolent principles before returning to the U.S. A highly adept tactician of Nonviolent Direct Action, Lawson worked closely with Dr. Martin Luther King Jr., who hailed him as “the leading theorist and strategist of nonviolence in the world.” He continues to teach Soul-Force through monthly workshops.

HAF: Did Dr. King see a role for violence in the quest for justice? What, in his view, were the limits of nonviolence?

Reverend Lawson: There were no limits to nonviolence. Martin Luther King Jr. and I were against the Vietnam war and all forms of violence. [Reverend Lawson identifies various structures of violence, including racism, sexism, plantation capitalism]

HAF: How would Dr. King respond to the racial climate in America today? Is his political philosophy on social change still relevant today?

Reverend Lawson: The relevance of Martin Luther King’s political philosophy of social change in today’s racial climate, as displayed in the attack on the Capitol, is greater today than it ever was. In the sixties we used nonviolent direct action against racial segregation and unjust laws, and now there are campaigns being launched against mass imprisonment. Black Lives Matter has brought attention to police violence. I feel that it is very important to keep the momentum to bring change.

Reverend Lawson: We were all rooted in the religion of Jesus, not in the dogmas of religion. “Religion of Jesus” was Howard Thurman’s term. Howard Thurman was a renowned Black theologian who went to India with a delegation to visit Gandhi in 1936 to learn about the method of nonviolence for the American context. We were not aligned with more conventional Christian belief systems, but the religion of Jesus. Martin King also said this in different ways. Teachings of Jesus were very important in both Dr. King’s and my life.