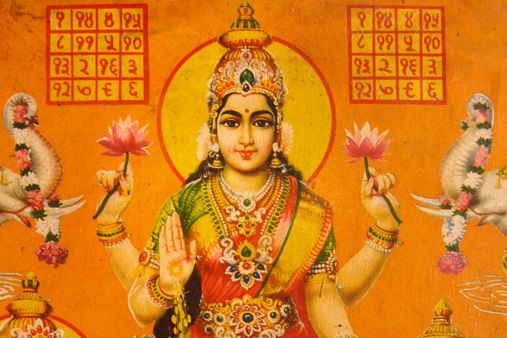 The Goddess of Prosperity, Lakshmi, inspires much devotion. There are many accounts of her creation, but the most popular is one found in the Rāmāyanā (though there are older accounts in both the Vedas and Purānas). She is said to have wafted out of the ocean of milk, which was churned by both the devas (Gods) and the rākshasās (demons) in a quest to obtain amrita, the nectar of immortality. Since her appearance, she has captured the hearts of Hindus and become a central figure in Hindu lore.She is often depicted sitting upon a lotus and adorned with lotus at her hands and feet. Many of her names, Padmā, Kamalā, Ambujā, refer to the lotus. The lotus has powerful symbolism in Hinduism. While its roots are in the mud, its stalk rises clearly through the murky water, with its petals blossoming above, untouched by the mud. It is a symbol of rising above the material world through divinity, of being good in the midst of negative influences. Like the lotus, as the Goddess of Prosperity, Lakshmi shows us how to transcend material wealth for spiritual progress. The lotus is also a symbol for purity, fertility, and beauty. She is often shown with four hands, which are meant to represent the four goals of life: kāma, artha, dharma, and moksha. These are said to also symbolize the four Vedas. She wears a red sāri with gold thread, again representing wealth, beauty, and fertility. Coins rain down from her palms, as she smiles blissfully. There are often elephants in the background, who represent power and hard work.

Her ubiquity is demonstrated clearly by the widespread use of the symbol Śri, which represents her and material prosperity. She is seen as the wife of Vishnu, the Preserver, and her avatars accompany many of his (like Sita with Rama and Rukmini with Krishna).

The holiday Diwali is for many a tribute to Lakshmi. Hindus vigorously clean their homes and surroundings, and light them and their businesses up with rows of lights in order to invite the Goddess to visit and bequeath them with prosperity, both material and spiritual. Mothers are seen as embodiments of Lakshmi, as they are responsible for the fortune and prosperity of the household, and are specially honored by their families. Diwali is also a time to recognize important relationships by visiting relatives and friends to exchange gifts and sweets. Lakshmi puja, honoring and invoking the Goddess, is usually followed with Lakshmi ārti. In Nepal, Lakshmi puja is an important component of the five day festival of Tihar. Similarly to Hindus in India, Nepali Hindus celebrate by buying gold, silver, precious stones, and new utensils for their kitchens, and clean their homes to invite Lakshmi into their homes the night of Lakshmi Puja. Goddess Lakshmi is also celebrated during Navaratri, when she is remembered during the fourth through sixth nights of the nine night festival.

Goddess Lakshmi, who is the daughter of the king of the ocean of milk,
whose abode is Srirangam with Lord Ranganatha
Who is served by all the divine ladies in heaven
Who is the guiding light for the world
Who has obtained the sustained (continued, everlasting) glance (Grace) from Brahma
Indra and Shiva, whose abode is the three worlds (Bhu, Bhuva, Suvaha) – I offer my prostrations to Thee, the beloved of Lord Krishna (Mukunda)