On being a voice in the global kirtan choir: Jahnavi Harrison - Hindu American Foundation
EducationLiving Dharma 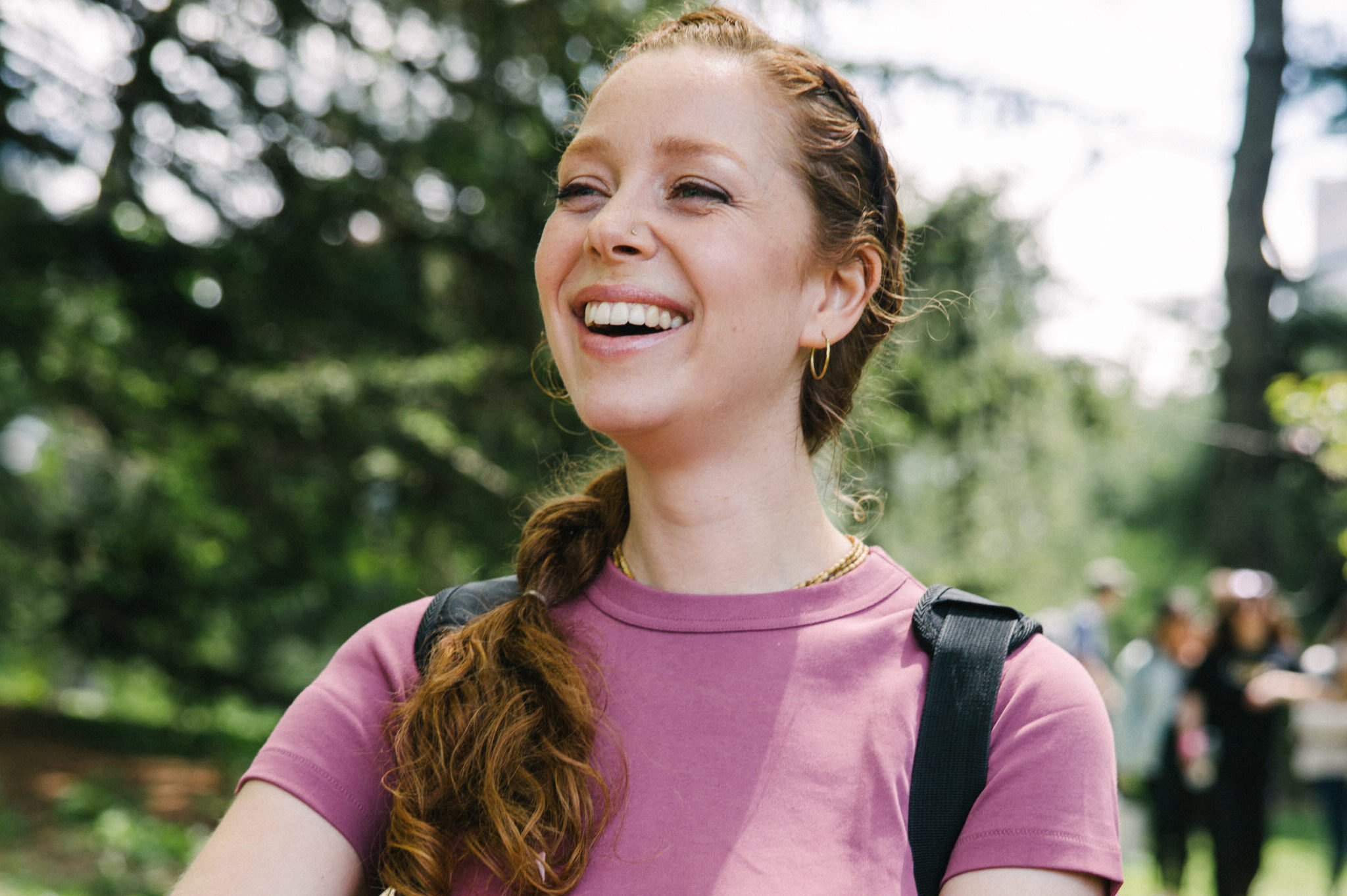 Kirtan — the process of connecting to the Divine through the congregational singing of sacred mantras — has, for the most part, been a relatively niche practice in the Western world. But as the yoga scene has boomed into a multi-billion dollar industry, kirtan too has seen an immense rise in popularity in recent years, elevating a number of people to celebrity-like status.

Among them is Jahnavi Harrison, whose passion, love, and talent for kirtan has transcended her beyond the boundaries of alternative listening. Since releasing her debut album “Like a River to the Sea” in 2015, she has made regular appearances on BBC Radio 2’s “Pause for Thought,” contributed to the Grammy-nominated album “Bhakti without Borders,” and most recently, collaborated with Willow Smith on their EP “Rise.”

HAF: How did you start down the path that you’re on now? How did it all begin?

Jahnavi Harrison: I was born to parents who had found the path of bhakti yoga through their own individual spiritual quests, long before they married each other. My father came from a Christian background in England, and my mother from a Jewish background in Canada. They each went on their own search for deeper meaning and in different ways came in contact with members of the International Society for Krishna Consciousness [ISKCON]. They both lived in temple ashrams for over 10 years before marrying and starting a family, so by that time my siblings and I were being born to parents who had well-established training and culture in this spiritual path. I grew up about a 10 minute drive from Bhaktivedanta Manor, the beautiful estate that George Harrison [Jahnavi is not related to George Harrison] had gifted to the Krishna devotees in the early 1970s. My parents both worked and served there every day, and my siblings and I attended school there daily.

HAF: Most Westerners who come to Hinduism usually do so as an adult. You, however, were born into it. What was it like growing up as a Westerner in a Hindu tradition?

Jahnavi Harrison: I don’t think I thought of myself as a “Westerner” ‘til I got older. I grew up in an environment where we studied the Bhagavad Gita — where we were taught that our true identity is the eternal soul, and not the outer covering of the body. I had kids from different ethnic backgrounds in my classroom, and the adults around me were a mix too. There were many people around from Hindu families, mostly Gujarati, but I didn’t see myself as different from them. I think as I got older, and the number of ethnically Indian congregation members and pilgrims to the temple grew and grew (along with people asking me questions like this one!), I became more aware that someone with my skin color practicing a form of Hinduism looked strange or curious to some. I have had a mix of reactions over the years and of course endless questions which, as a teenager, I was extremely shy and embarrassed about, but later on I grew to appreciate.

HAF: There are numerous spiritual disciplines within the bhakti tradition. What is it about kirtan specifically that resonates so strongly with young devotees in particular?

Jahnavi Harrison: I think kirtan resonates with young people because it is fun; easy; soothing to the mind and heart; facilitates connection and bonding with others in a deep way; and of course, is expressed through music, which I think unites every one of every age. It’s not demanding — you can just show up and take part and be yourself. It’s an experience.

HAF: Once upon a time, kirtan was a relatively niche practice in the Western world. As the yoga scene has boomed into a multi-billion dollar global industry, however, kirtan too has seen an immense rise in popularity, elevating a number of individuals to celebrity-like status. Such notoriety can be like a double-edged sword. Though it can enable one to introduce a rich spiritual practice to much larger audiences, it can also become a motivating factor that dilutes the integrity of the practice. As someone who’s gained a level of notoriety through kirtan, how do you stay grounded and true to its spiritual purpose?

Jahnavi Harrison: “Fame” for me has come extremely gradually. My life is basically quite normal, with normal people in it, and I think because fame was never something that I was seeking or chasing, it’s been an interesting journey to just experience what it all means and how I can use it in service, trying to be honest and authentic. What grounds me is staying connected to the sacred teachings that underpin the bhakti tradition, and to the practitioners — my teachers, friends, family, community, who I see as exemplars. The purpose of kirtan is to glorify the Supreme and I know that unless that is at the top of my mind in all endeavors, I have lost track of why I’m doing it. I try to be prayerful about what I’m doing, and offer whatever I have sincerely, even though it may be full of pride or other unwanted things.

HAF: What does your daily spiritual practice look like?

Jahnavi Harrison: The cornerstone of my daily spiritual practice is my japa meditation. I chant the maha mantra on my japa mala in the morning, as early as I can (sometimes the time is quite inconsistent depending on travel and other things!). I do this for a fixed time so it can be challenging sometimes to fit it in, but doing it consistently gives a feeling of strength and depth to the commitment. I also try to read some spiritual wisdom or listen to a lecture every day. Those are my main things, but there are lots of little prayer moments in the day…I feel like all of life is a spiritual practice!

HAF: Who do you/have you looked up to in the world of kirtan, and what was it about them that inspired you? How has that inspiration informed the way you approach kirtan?

Jahnavi Harrison: I look up to my father Kripamoya Das in his consistency, dedication, and also the sound of his kirtan, which was the soundtrack to my life, especially as a child. I look up to Yamuna Devi [an ISKCON devotee renowned for her sincerity, kirtans, and vegetarian cookbooks, including Lord Krishna’s Cuisine: The Art of Indian Vegetarian Cooking], in her grace, simplicity, absolute devotion, and chastity to her guru; I look up to my param guru Srila A.C. Bhaktivedanta Swami Prabhupada [the founder of ISKCON] who believed so much in the power of kirtan that he was willing to bring it to the Lower East Side in New York in the 1960s, sitting under a tree alone, singing with deepest love. I look up to my friends and “kirtan elders” of many different backgrounds who I sing and pray with in my life today. They all teach me so much every time we sit and sing together, and my admiration and love for them is immense!

HAF: I have heard from some non-Indian origin Hindus that they’ve been accused of appropriation by South Asian activists in the name of social justice. Have you or people you know faced this? If so, how did you or they respond?

Jahnavi Harrison: Yes, I have heard about this a lot and then I experienced it in a strong way last year. I didn’t really respond to it at the time, as I feel that a lot of the criticism was the result of personal trauma, cancel culture, and gross misunderstanding about my own background and the relationship between spirituality/religion and culture. At the time I felt that responding would just amplify and validate the criticism unnecessarily. It made me feel sad and hurt initially, but then I let it go. Unfortunately, discrimination of all kinds is a part of life. The best I can do is to keep trying to do my dharma with sincerity.

HAF: How should non-Indians who are new to bhakti yoga enter into and engage with the tradition without falling into cultural appropriation? Where, in your view, is the line between appropriation and appreciation?

Jahnavi Harrison: I think when entering into any tradition, it is important to have utmost humility and respect. In the Bhagavad Gita the ideal student is described as someone who is pranipata — who has an inclination to surrender to the truth; who asks respectful questions (pariprasna) and who is inclined to serve (sevaya). I think appropriation happens when a person doesn’t care to learn, but just wants to take from or toy with aspects of a tradition that they find whimsical or charming without contemplating the consequences. That said, I do think that in these times where we are quick to accuse people of cultural appropriation it can also discourage sincere people from exploring other spiritual paths. As much as I think cultural appropriation is abominable, I believe that no culture or nation owns God. It’s a sensitive issue that requires a lot of care to navigate at times.

HAF: What single piece of advice would you give to young people who are getting into kirtan today?

HAF: What role do you think kirtan will play as Hindu spirituality takes further shape in mainstream culture? What’s your hope for the future and what sort of responsibility do you feel in helping that future manifest?

Jahnavi Harrison: Sound and music are powerful and spread quickly and easily in today’s world. I hope that people all over the world get the opportunity to experience the beauty, joy, and medicine of kirtan. I think that will happen not just by the leaders of kirtan sharing consistently and innovatively, but also by the lovers of kirtan sharing it with friends, family, colleagues etc. As far as my part, a kirtan mentor of mine, when praised for his exceptional contributions, always says “frogs must croak”. I love that! I happen to like doing this, and I’m able to sing and play instruments, so this is naturally a way I’ll try to keep serving. I’m willing to dedicate my life to it — though the way that looks may morph and evolve over time. I’m just very grateful to be one voice in the global kirtan choir!

To learn more about Jahnavi, her music, and her upcoming events, visit her website here. Her music can also be accessed on Youtube, Spotify, and Apple Music.