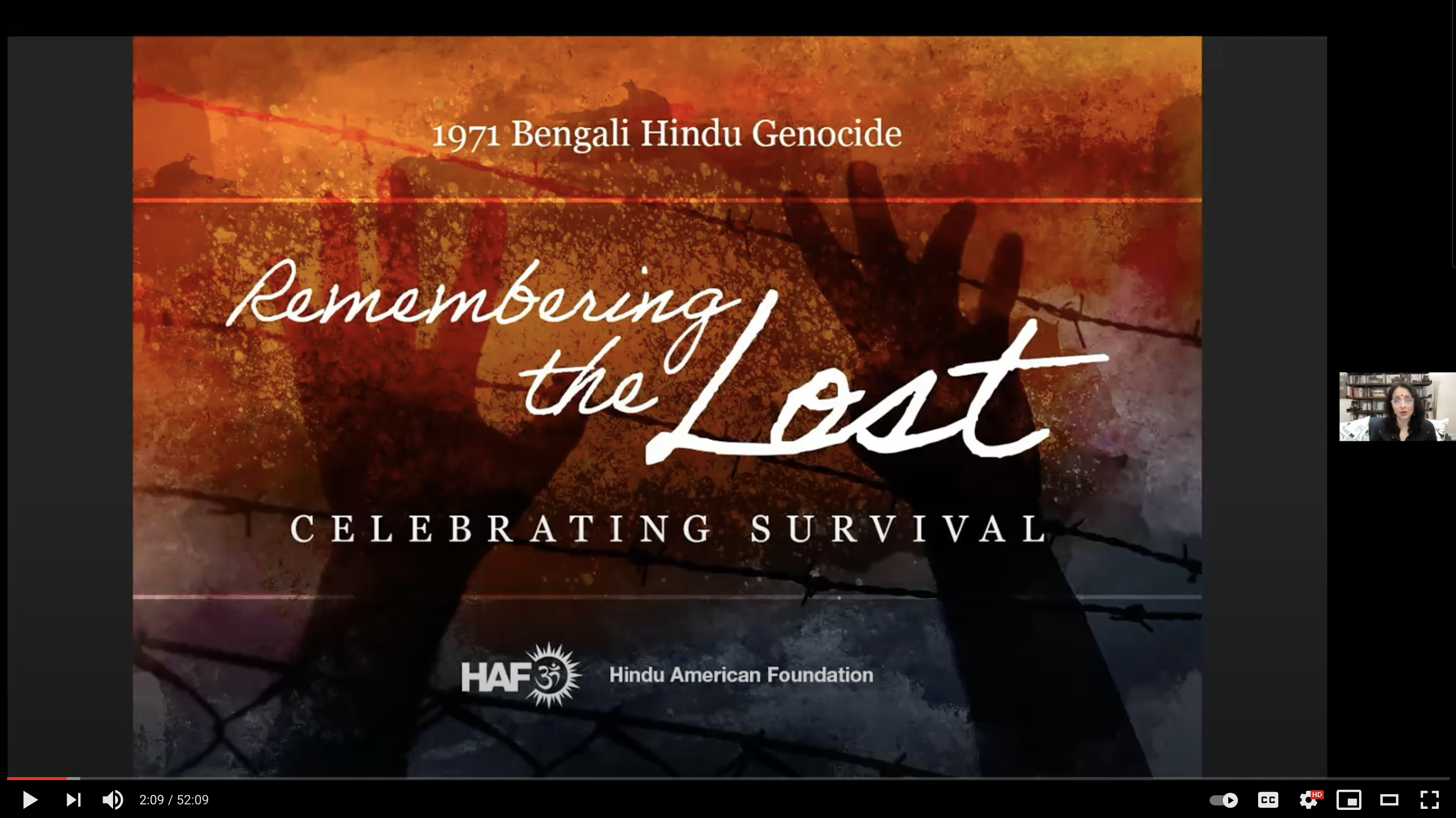 The event featured: Sanskrit and Bengali musical performances to honor those lost; remarks by Debatosh Da, whose parents were killed in the genocide; remarks offered by community and government leaders; and a posthumous award presented to former US Consul General in Dhaka, Archer K. Blood, who attempted to warn the US about the genocide as it was happening in 1971.

“After fifty years, and there is still denial of the hundred of thousands of women who were raped, millions who were killed, and over ten million displaced during the 1971 Bengali Hindu genocide,” stated HAF Director of Human Rights Deepali Kulkarni.

Not yet recognized as a genocide by the international community, the West Pakistan military’s genocidal campaign left 2-3 million ethnic Bengalis dead, 200,000-400,000 women raped, and more than 10 million people displaced. The overwhelming majority of victims were Hindu.

During the program, statements were read from Members of Congress commemorating the Bengali Hindu Genocide. A statement (hyperlink-see below) from House India Caucus member Rep. Sheila Jackson-Lee (D-TX), submitted into the Congressional Record, was shared with participants, “It has been 50 years since the genocide in Bangladesh, and the survivors and their descendants are still fighting for recognition; they are still fighting for an apology from Pakistan, as the Prime Minister of Bangladesh formerly asked her Pakistani counterpart as recently as January of 2021; and they are still fighting for justice and for closure.”

A statement submitted into the Congressional Record by Congressional Asian Pacific American Caucus Chair Rep. Judy Chu (D-CA) was also shared, in which she stated, “The 1971 Bengali Genocide was one of the worst human tragedies of the 20th century, with over 2 million lives lost and over 10 million displaced. In addition, over 200,000 women were violently raped. The  campaign of sexual violence against women in particular was so severe that the United Nations was bringing in doctors to help treat these women.”

House India Caucus Vice-Chair Representative Ro Khanna (D-CA), recalled the horrors of  the genocide on Twitter, stating: “Today marks the 50th anniversary of the 1971 Bengali Hindu Genocide. Millions were killed or displaced in what was one of the most forgotten genocides of our time. I stand with the Bengali Hindu diaspora & human rights activists to ensure that we and the world never forget.”

In addition, it was also noted that the City of North Canton, Ohio passed a resolution (hyperlink) “commemorating March 25, 2021 as the 50th anniversary of the Bengali Hindu genocide and calling on the Government of Bangladesh to protect the human rights of all its citizens, particularly religious minorities.”

“We would like to express our sincere gratitude to the elected officials who have spoken out to affirm the 1971 genocide,” Kulkarni concluded.