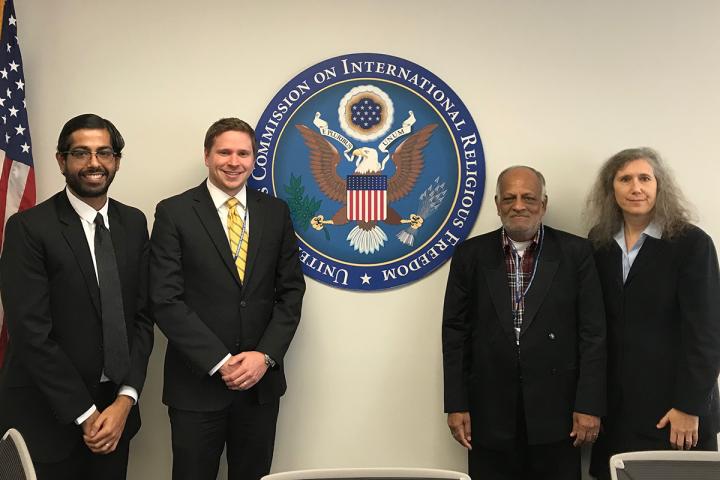 Washington, DC (November 17, 2017) — In early November, the Hindu American Foundation (HAF) hosted Mr. Rabindra Ghosh (second from right in photograph), Supreme Court attorney and founder of Bangladesh Minority Watch, a non-governmental human rights research and investigative body, for two days on Capitol Hill. Mr. Ghosh came to Washington to brief US government officials and NGO leaders on the desperate conditions and persecution that Hindus in Bangladesh are facing on a daily basis.

Mr. Ghosh presented harrowing details of young girls from minority communities being kidnapped by human trafficking rings, Hindu temples destroyed by mobs, and property confiscated without due process, along with the ever increasing Islamization of the state and civil society in Bangladesh.

Upon meeting with Congressional leaders, the US State Department, and the US Commission on International Religious Freedom (USCIRF), Mr. Ghosh was also able to provide first-hand accounts of the discrimination that Rohingya Hindus that fled from Myanmar are now facing in Rohingya refugee camps near Cox’s Bazar in southeastern Bangladesh. HAF further provided information on the exact location of Rohingya Hindu families to State Department officials, in order to ensure that they receive adequate aid from international agencies and that their unique needs are addressed.

Upon returning to Bangladesh last week, Mr. Ghosh visited the recently ransacked village of Rangpur, where several homes belonging to Hindus were burned to the ground by a mob of thousands of people. The village was burned down after local Islamist clerics incited villagers to target Hindu homes after a post allegedly insulting Islam began circulating on social media. The individual who reportedly created the post, Tito Roy, was arrested and is in now in police custody. Mr. Ghosh provided the following eyewitness account after seeing the destroyed village and meeting the now homeless Hindu residents who had lost their homes:

“We noticed 24 houses of Hindu dwellers were either set on fire and [a] huge number of belongings/goods including 16 cows were looted, although police recovered 14 cows from the possession of the perpetrators. During our investigation [District Officers] was present. The Hindu victims complained that the inadequate compensation paid to them by the Deputy commissioner is far from their need and the irreparable loss sustained by them was not mitigated.”

“During our fact finding it is revealed that two daughters of detenue Titu Roy were kidnapped for forceful conversion to Islam one after another by the local Muslims… Ms.Shewli Rani (18) however recovered from the Muslim perpetrators but Ms.Suchitra Rani (13) was not rescued and she is still under the captivity of the Muslim perpetrators.”

HAF has requested US officials to engage their counterparts in Bangladesh to ensure Mr. Roy has access to counsel and is treated humanely during his detention and trial. HAF also urged further investigation into the allegations against Mr. Roy, as such claims are often fabricated and used as pretext by Islamists to force Hindus to leave the country or to illegally seize their properties.