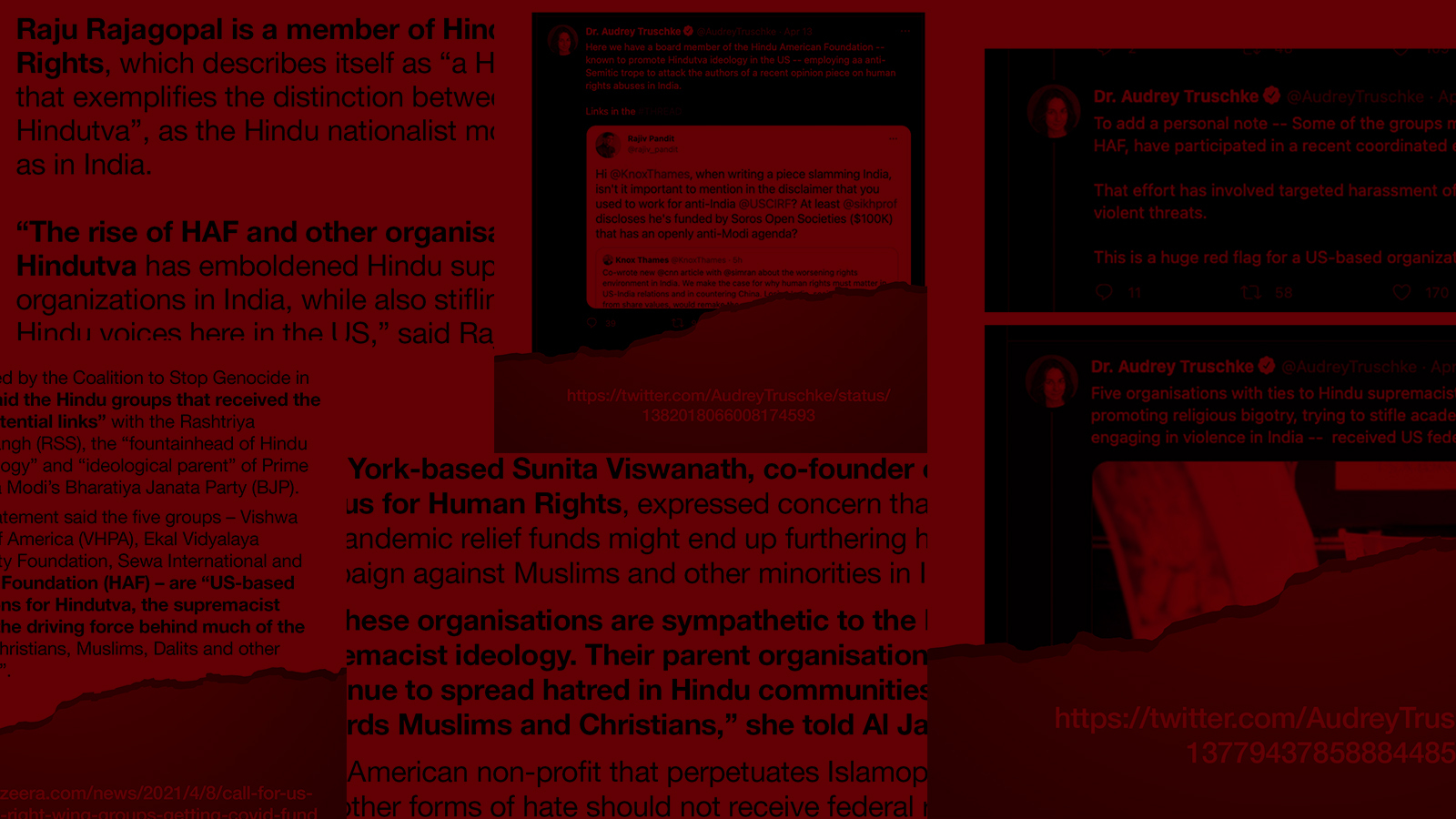 HAF’s complaint also outlines how the defendants used the US-based Coalition to Stop Genocide in India to provide cover to make further defamatory statements against HAF and demand the US government start an investigation into HAF and other Hindu organizations for allegedly using Federal funds to “sponsor hate” in India.

Professor Truschke, who has worked closely on a number of occasions with IAMC, HfHR, and Sadhana — all organizations controlled or operated by the other defendants — went on the republish and amplify the defamatory statements, while falsely accusing HAF of organizing violent threats against her.

Truschke and IAMC’s advocacy director are both listed as board members of another Coalition to Stop Genocide in India member organization.

“This isn’t just about defending HAF’s hard-earned reputation as a leading education and human rights organization. This is about fighting back against coordinated attacks against Hindu Americans in the public space,” said Suhag Shukla, HAF’s Executive Director.

“From organizations serving community needs to candidates running for public office to students exploring their Hindu identity on college campuses — the defendants have relentlessly sought to intimidate, harass, and silence the Hindu American community. This will no longer come without a cost,” Shukla asserted.

“The claims of financial impropriety made in the Al Jazeera articles are verifiably false, as all of HAF’s relevant financial documents are publicly available on our website” stated HAF Managing Director Samir Kalra. “HAF leadership strongly rejects insinuations of dual loyalty to India or any accusations of spreading hatred or Islamophobia,” Kalra added.

As per tax filings, HAF has only sent funds overseas to independent organizations supporting Hindus fleeing persecution in Pakistan, now living as refugees in India, and those helping persecuted Hindus in Pakistan itself. None of these organizations received any funding from money HAF received under US covid relief programs.

Listed as a non-party to the lawsuit but as a co-conspirator to defame HAF is the author of one of the Al Jazeera articles, Raqib Hameed Naik.

HAF’s complaint shows that Naik, rather than simply being an independent journalist, as presented by Al Jazeera, has deep and ongoing connections with both IAMC and HfHR, speaking at events jointly organized by both organizations and serving on IAMC’s executive team.

Following publication of both defamatory articles Naik was listed as a speaker for “News and Media Outreach” at an IAMC quarterly planning meeting discussing advocacy and media strategy.

HAF is seeking compensatory and punitive damages from the named parties; a permanent injunction against further dissemination of the defamatory statements; a public retraction of the Al Jazeera articles; and, payment of HAF’s legal fees.