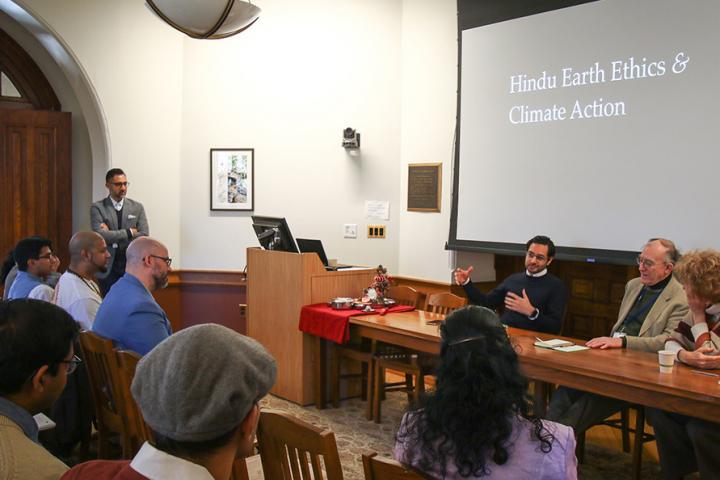 On February 9, Yale University hosted Hindu climate and environmental advocates for the one-day “Hindu Earth Ethics & Climate Action” conference. HAF was one of the sponsoring organizations for this event, with HAF Director of Communications Mat McDermott being one of the speakers. The following is a recap of the event from Yale News.

Citing the need to become more prominent voices in fighting climate change — and ushering in a new green revolution — Hindu climate activists met Feb. 9 to lay out the theological and practical framework for collective action.

The Hindu Earth Ethics and Climate Action conference at Yale was the culmination of months of work in bringing together climate activist leaders, academics, and policy-makers who are also Hindu, in order to claim a mantle of leadership in fighting what many call an existential threat to humanity and the world. Organizers noted that the event was designed to tie Hindu scriptural teachings on seeing the divinity in all beings to taking everyday action in fighting climate change and global warming.

“What climate change presents is answering the question at the heart of Hinduism,” said Gopal Patel, executive director of the Bhumi Project, a U.K.-based Hindu climate action group and one of the conference’s organizers. “What does it mean to be a person in this world?”

Patel noted that followers of Hinduism and other Dharmic religions like Buddhism have long argued a different model than those of Abrahamic faiths in combating climate change. That’s because, he says, rather than looking at climate change from a matter of human rights, Hindu philosophy prioritizes the idea that “all life has rights.”

Speakers emphasized the urgency with which Hindu leaders must work to take the lead on combating climate change, arguing that fighting to preserve Matre Bhumi or Mother Earth, was critical. With greenhouse gas emissions increasing at faster rates than ever, many scientists note that the climate is reaching a point of irreparable damage, leading to widespread extinctions and population displacement.

“We are at a strong inflection point in history and humanity is literally fighting an existential crisis,” said Mat McDermott, communications director for the Hindu American Foundation, another conference co-sponsor. McDermott was one of the leader authors on the 2015 Hindu Declaration on Climate Change, which was endorsed by over 100 Hindu organizations and leading activists worldwide.

McDermott and others noted that addressing climate change can be viewed from the lens of bhakti, or selfless devotion. Hindu theologian Chris Fici added that “love is the foundation of Hindu ethics.”