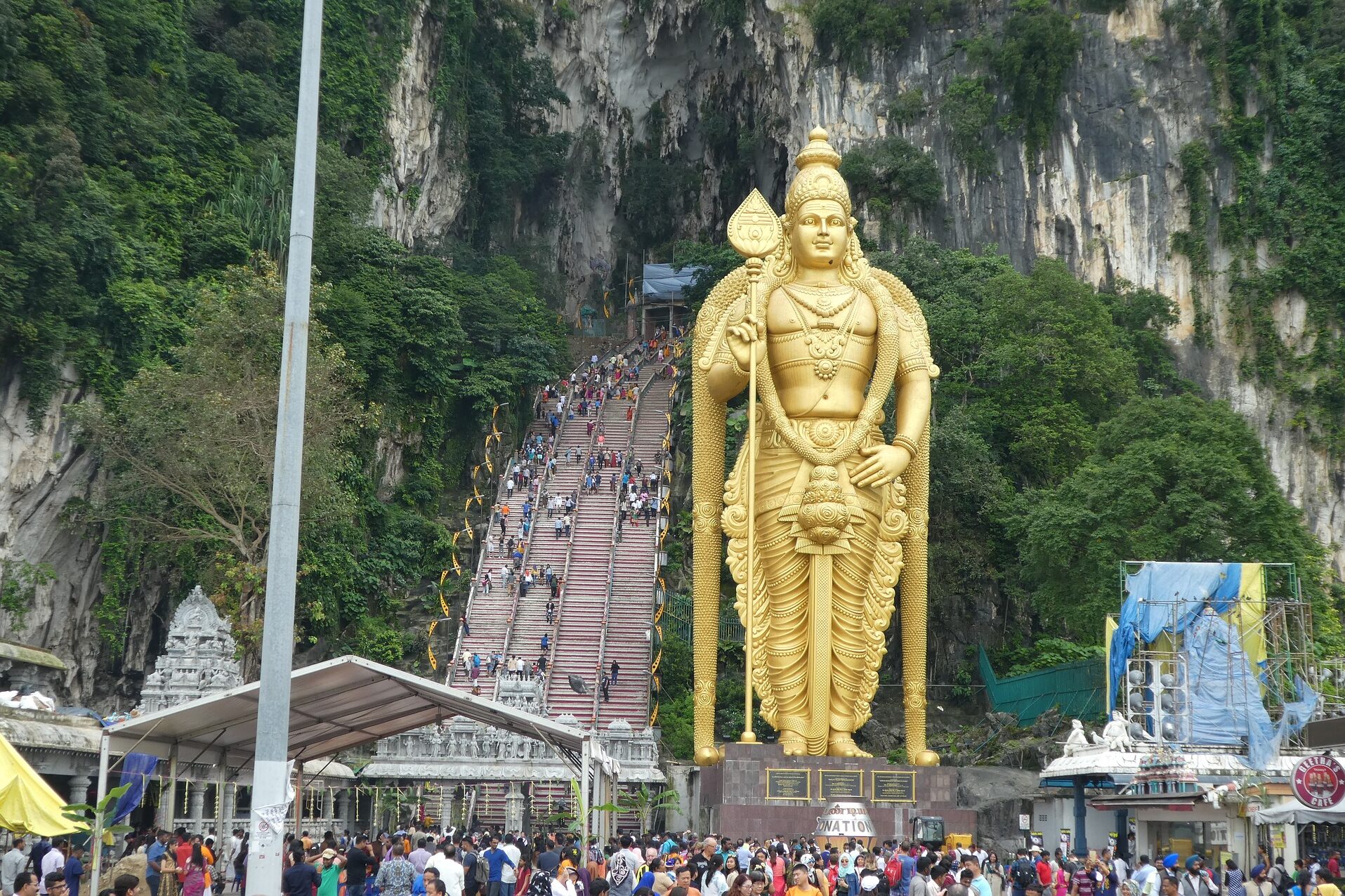 1) Hinduism was the dominant religion before Islam took over

Indian influence in the Malay-speaking world dates back to at least the third century BCE, when traders and mystics, carried by the monsoon winds of the Indian Ocean, brought Hinduism, along with Buddhism, to the archipelago.

Spreading throughout the region, an empire eventually took shape, as Hindu culture reigned in Malaysia, flourishing especially between the seventh and 13th centuries CE.

Things began changing, however, in roughly the 10th century CE, when more traders and mystics, this time Muslim, found their way to the archipelago by the same winds, delivering their own religion.

Taking root in the coastal maritime kingdoms, Islam subsequently expanded, leading to the conversion of most of the Malay-Indonesian world, effectively supplanting the Hindu empire, becoming the dominant religion by the 15th century CE.

Islam has maintained its command on Malaysia up until today, with more than 60 percent of its population as adherents. Hinduism, on the other hand, is now the country’s fourth largest faith, with about six percent of the population as followers.

Most of this six percent are descendants of a second influx of Indians who rekindled Malaysia’s Hindu flame when they were forcibly brought to the country by British colonialists to work as indentured laborers in the 1800s.

Unfortunately, since gaining its independence in 1963, Malaysia’s oppressive religious and political dynamic has heavily suffocated this flame, threatening to put out the light it has shone in the country for millennia.

Upon their departure, the British left provisions in the constitution that favored Muslims and ethnic Malays, known as the Bumiputra (“sons of the soil”) policies.

These provisions created a system that left non-Malays as second-class citizens, affording a special status to ethnic Malays by defining “Malay” as a “person who professes the religion of Islam, habitually speaks the Malay language, [and] conforms to Malay custom..”

Thus providing a legal justification for the oppression of ethnic and religious minorities, the practical implications of these provisions have led to the evolution of Malay ethno-nationalism, resulting in a long history of severe discrimination.

In 2007, after years of suffering persecution in silence, Indian Hindus began to challenge the government’s discriminatory practices, when they organized mass peaceful protests. The Malaysian government, however, answered by cracking down on the Indian and Hindu communities, arbitrarily detaining and arresting hundreds of Hindus and banning Hindu organizations.

Making little progress, nearly 500,000 mostly ethnic Chinese and Indian Malaysians, tired of being treated like second-class citizens, left the country between 2007 and 2009, as the Hindus who remain in Malaysia continue to be afflicted by religious tyranny.

Muslim impact has been particularly oppressive to Indians through the country’s judicial system, which Islamists have gained steady influence over since the 1990s, after the Federal Constitution was amended in 1988 to give official recognition to Shariat.

Much of the problem lies in the country’s parallel court system — comprising of secular civil courts, and Shariat courts — in which there has been, and continues to be, a blatant imbalance of power in favor of the latter.

The Shariat courts have authority over Muslims on issues such as religion, marriage, divorce, inheritance, apostasy, and religious conversion, where the secular courts have no jurisdiction. The Sharia courts, however, have also exercised jurisdiction over non-Muslims, subjecting them to outright discrimination in intra-family disputes.

In one famous case, the Shariat courts forcibly removed a 15-month old baby from its mother, Revathi, after she converted to Hinduism.

Revathi, who was born to Muslim parents (they converted to Islam) but raised as a Hindu by her grandmother, was also imprisoned in a religious re-education center for individuals who “transgressed” against Islam.

Revathi was held in custody at the religious rehabilitation center for 178 days and only released upon the condition she live with her Muslim parents, even though she was a married adult. This was the only way she would have access to her daughter. The High Court also refused to hear a case by Revathi’s husband looking into the legality and conditions of the detention.

4) Government-imposed legal regulations also place restrictions on the ability of Hindu communities to openly practice, assemble, or register their organizations

Though the Constitution guarantees the right to practice and profess one’s religion and that every religious group may manage its own religious affairs, the government simultaneously places limitations on those rights.

The Registrar of Societies, for example, enjoys “absolute discretion” to register or declare unlawful an organization or society believed to be a threat to national security or against “public order or morality,” and requires all registered groups to support Islam as the religion of Malaysia.

Additionally, sedition laws criminalizing speech that “promotes ill will, hostility, or hatred on the grounds of religion,” have disproportionately been used to target those allegedly making statements about Islam, while action has rarely been taken when statements have been made about non-Muslim religions.

For instance, in March 2019, a man was sentenced to six years in prison and fined $12,200 for allegedly making a post “offensive to Islam” on Facebook. On the other hand, the head of an Islamic information center was arrested in April 2019 for insulting Hinduism during a religious seminar broadcast on social media, but the attorney general decided not to pursue any charges against him.

According to Hindu groups, approximately 23,000 Hindu temples/shrines in Malaysia have been denied legal status since independence in 1963 (including many from the pre-independence era), while Muslim mosques built in the same period have been granted land titles.

Also since independence, 10,000 Hindu temples/shrines have reportedly been demolished, desecrated, or forcibly relocated and appropriated for “public use” under special laws. This includes hundreds of Hindu temples that were demolished by government authorities in the last year alone.

Beyond the government, Hindu temples and sites have been targeted by non-state actors as well. In May 2019, four suspects from an ISIS affiliated group were arrested for planning a 2018 attack on three Hindu sites, including the Batu Caves, which are considered one of Hinduism’s most well-known and monumental pilgrimage destinations outside of India.

In addition to the restrictions that make them unable to freely practice their religion, Hindus are also plagued by socio-economic inequality in several spheres, such as university admissions, government jobs, business and government contracts, and property ownership, among others.

Approximately 54 percent of Indians work as laborers on plantations or in urban areas in Malaysia, and close to half of the Indian population are amongst the lowest income earners, while thousands are undocumented.

Yet, as conveyed in the first four subheadings of this piece, social attitudes and government policies have been increasingly hostile towards ethnic Indians over the decades, and there have been little to no reforms undertaken since the country’s independence to rectify their conditions.

As such, if Malaysia ever wants to be viewed by the greater world as a nation that confers basic human rights to all of its citizens, it must:

It is also incumbent upon the US and the international community to exert pressure on the Malaysian government by revisiting its trade ties with the country, as the government continues to distribute economic entitlements to the majority Muslim Malay population. These policies not only impact minorities, but also affect the country’s economy and the viability of foreign investment. Putting pressure on Malaysia to reform these policies will benefit American investors, while addressing the economic marginalization of the Indian minority.

Much of the information in this piece is derived from Hindu American Foundation’s Malaysia human rights report. To learn more, visit it here.