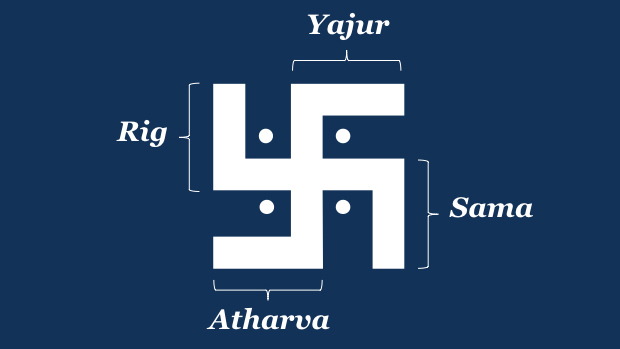 The swastika is a symbol as old as humanity itself, one which to this day, despite it being confused with the hateful Nazi emblem, has a powerful positive message. We’ve gone over some of that history in 10 Things You Need to Know About the Swastika. Here’s a bit more on the symbolism of the swastika within the Hindu tradition.

1) The Four Limbs Represent the Four Vedas: The left represents the Rig Veda, the top the Yajur Veda, the right the Sama Veda, and the bottom, the Atharva. Together these form the foundational teachings of Hinduism, representing several millennia of spiritual exploration and insight.

2) They Represent the Four Stages of Life: Clockwise from top: Brahmacharya, Grihastha, Vanaprastha, Sannyasa. These are the four ashrama, or stages of life. When you are young you are in the brahmacharya stage, a student. After that comes the householder stage, grihastha. Then later in life comes vanaprastha, where you become a retired elder. Finally, a renunciation of material comforts and desires takes over during the final stage of sannyasa. Some people, after going through the brahmacharya stage, devote their entire lives to spiritual pursuits and enter sannyasa then.

3) And the Four Goals of Life: Accompanying the four stages of life are the four goals of life, the purusharta, (clockwise from left): Dharma, Artha, Kama, Moksha. Very briefly, these are the four aims of life, and really encompass all the human experience. Dharma is the pursuit of living with a mode of conduct most conducive to spiritual advancement; artha is the pursuit of prosperity; kama is seeking pleasure in life; moksha is spiritual liberation—the ultimate goal.

4) They Also Can Be Taken to Represent the Four Yugas: In Hinduism, time is conceived of  both cyclically and over vast epochs. These can be mapped onto the arms of the swastika (clockwise from left) as Satya Yuga, Treta Yuga, Dvapara Yuga, and finally Kali Yuga. The latter  is both the shortest of the ages, and the one which we are now in.

6) And the Four Directions: One final, and very basic way to interpret the four limbs of the swastika is that the represent the four directions. North, south, east, west. All of the planet is represented in the auspiciousness of the swastika. Be well.