Classroom Subjected: Speaking To and For the Experiences of a Religious Other - Hindu American Foundation
Education

Classroom Subjected: Speaking To and For the Experiences of a Religious Other 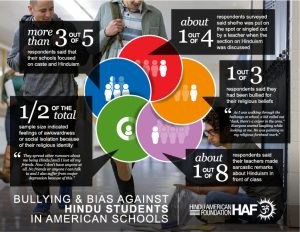 When I was in elementary school, one of my teachers – with the best of intentions – inserted a VHS (or Beta MAX) tape of Indiana Jones and the Temple of Doom. She had the scene cued to the infamous “Chilled Monkey brains” scene and asked: “Murali, is this a common Hindu custom?”

Let’s first keep in mind that sci-fi movies – or any movie, for that matter – should not be used as a means to teach about diversity or cultural practice. Secondly, the use of a fictional scene to caricature Hinduism is one reason why the religion continues to be deeply misunderstood within the American popular imagination.

But that 30 second snippet had a lingering impact on me, as I was bullied and constantly teased for being a Hindu. The bullying continued to varying degrees until I got to high school, when I was fortunate enough to play sports and find other avenues where my Hinduness never came up as a point of conversation.

Now, as I near 40, I realize I should have never needed to minimize or hide my Hindu identity. It was and is still very much a part of who I am. Moreover, because Hinduism itself is diverse and doesn’t have scales of religiosity, Hindu Americans like me – and more who have followed in the generations after – are finding it easier to self-identify without being stigmatized.

Yet even as Hindu Americans find more space to self-identify, the bullying that I faced 30 years ago hasn’t exactly subsided. More young Hindus are facing different types of discrimination (like the homogenization of the faith) or some of the old types (being pressured to convert to other religions), but schools, educators and parents continue to face challenges in addressing anti-Hindu bullying.

The Hindu American Foundation’s “Classroom Subjected” report attempts to try to deal with how the lack of cultural competency in classrooms can fuel environments in which Hindu students are bullied because of their religion. While the findings of the report are based on a pilot study, the responses from survey participants indicates some of the lingering challenges for Hindu American students. Some of the findings include:

While we don’t want to make broader claims on how these are applied to the Hindu American population as a whole, the findings do mirror previous anecdotal evidence as well as the trends of bullying against other minority faith communities. What has made it more challenging for the Hindu American community is that, unlike Muslim or Sikh Americans often targeted for their physical markers of difference (i.e. hijabs and turbans), the bias and bullying against Hindus is predicated on their beliefs. Respondents in our survey noted being proselytized or sarcastically told to convert to other beliefs, reflecting a more disturbing pattern in American classrooms: that Hinduism (and Hindu American students) is somehow incompatible with the American social fabric.

This sort of sustained bullying can also lead to social alienation. One student mentioned that she lost her friends because she identified as a Hindu, adding that she suffered major depression as a result. These anecdotes are stark and powerful reminders that what many young Hindus – especially those who were the children of immigrants – went through in previous generations still remains an impediment for Hindu students today. The bullying can also have significant impacts in the long run, particularly in how Hindu Americans – especially those whose faith had been stigmatized in classroom settings – identify with their religious identities in the public sphere.