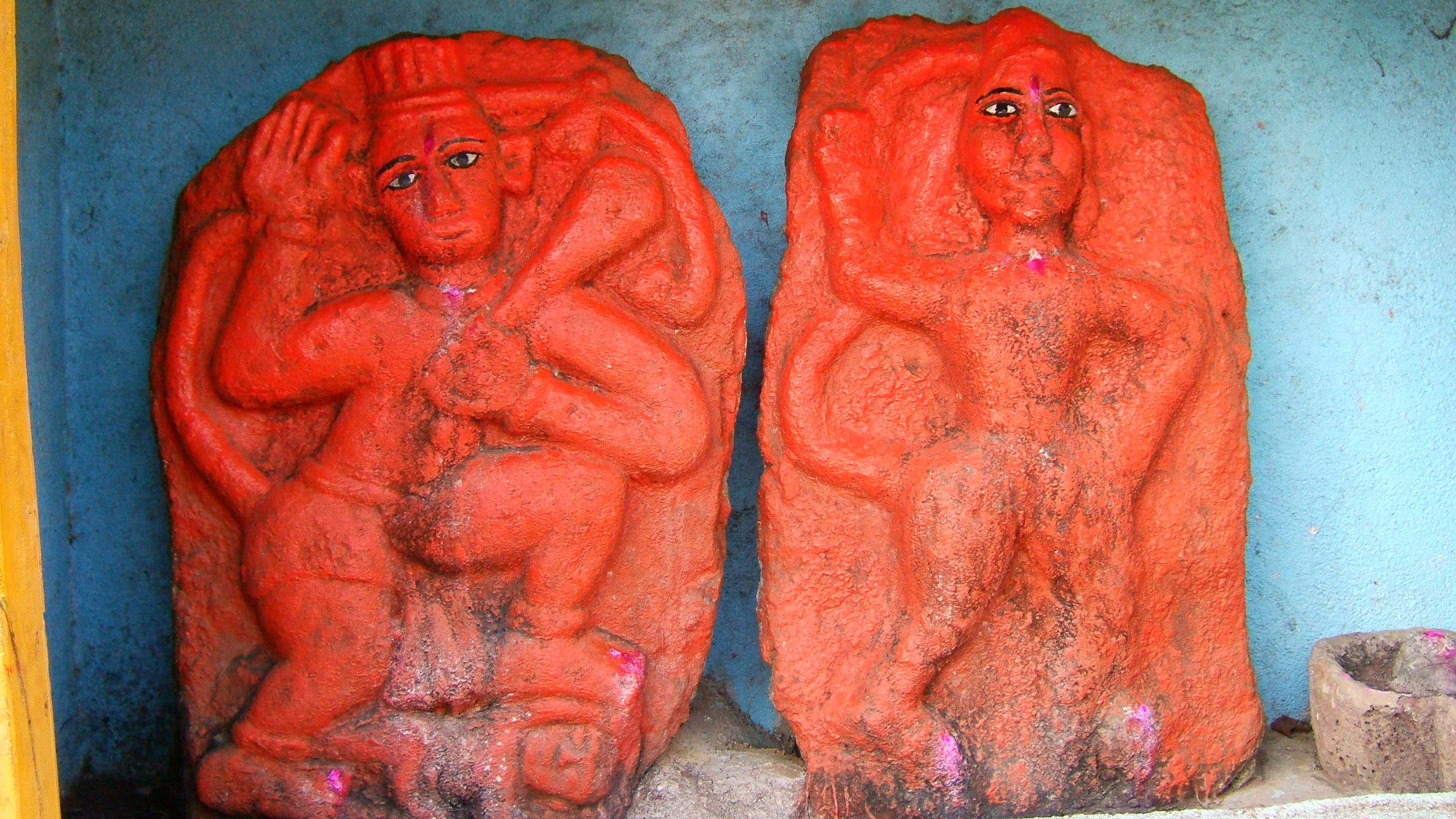 February 2nd is the samadhi day (attainment of liberation day) of Samartha Ramdas, the great 17th century rishi of Maharashtra. Samartha Ramdas was the rajaguru (spiritual advisor) of Chatrapathi Shivaji Maharaj and many of you may now be wondering why I’m talking about him in a series dedicated to highlighting some of the lesser known saints.

The simple answer is that there are many aspects that deserve to be known better rather than him being reduced to a single sentence of being Shivaji Maharaj’s guru.

In fact, the two only met in 1649, three years after Shivaji had captured his first fort, and Shivaji’s personality and attitudes were quite well formed by then. My personal opinion is that we have the mother Jijabai (and of course the divine Mother Bhavani) to thank the most for the phenomenon that was Shivaji.

It is, of course, clear that the Chatrapathi saw him as a rajaguru and also donated land for his ashrams, but I wouldn’t go so far as some do that he was responsible for making Shivaji Maharaj what he was.

But Samartha Ramdas contributed in a completely different way that made Maharashtrian society ready for their king and for the revolution he wrought. And that is what I want to talk about in this post.

His life in short

Samartha Ramdas was born in 1608 on Ram Navami day as Narayan, in Jamb in present-day Jalna district, Maharashtra. His father died when Narayan was around seven years of age, which turned him into an introvert often noticed to be engrossed in thoughts about the divine.

There is a moving story of how Narayan took sannyas (vows of a monk).

Marathi weddings, like most Indian ones, are multi-day affairs. On the morning of the wedding begins a series of religious rituals. Their commencement is announced by the utterance of “Shubh Mangal Saavdhaan” (Caution/Attention, the auspicious event !!). This is intended by tradition to announce the commencement of ceremonies for an auspicious matrimony but also serves to put the bride and groom on notice about the upcoming responsibilities of married life. It is said that Narayan fled his own wedding upon hearing the word ‘Saavdhan’.

Twelve years old at the time, he spent twelve years as an ascetic at Taakli in complete devotion to Lord Rama. It is said that he would stand in the river from dawn to noon, chanting “Shri Ram Jai Ram Jai Jai Ram”, the immortal Rama taraka mantra.

He attained enlightenment at the age of 24 (~1632) and adopted the name Ramdas.

In 1632, right after the completion of his period of sadhana, he left Takli. For the next 12 years, he traveled across India and minutely observed the condition of people. His observations are recorded in two works named “Asmani Sultani” and “Parachakraniroopan”

Ramdas during his travels came to identify himself with the hopes and aspirations of the people of this period and these two works contain numerous observations about life during his times.

And here comes an important feature that everyone should know about Samartha Ramdas: Most of the Maharashtrian bhakti saints primarily focused on devotion and guiding people towards liberation. In contrast, Samartha Ramdas was more conscious of the political situation during his time.

His work “Anandavan Bhuvan” reflects the hopes and ambitions of the people for swaraj (political self-rule) while “Ram Varadayini” is a prayer for the health and well being of Shivaji Maharaj. His writings include strong expressions encouraging nationalism means to counter the depredations and destruction the country witnessed at the hands of Muslim rulers.

In this he belonged to a long tradition of spiritual personalities explicitly engaging in nation building and the protection of Dharma.

It is an important thing for all of us to know that spiritual leaders can and do involve themselves in matters of political emancipation. This illustrious list includes Chanakya, Sri Vidyaranya who inspired the founders of the Vijayanagar empire, and the illustrious Sikh gurus (there are probably many others that I am unaware of).

In fact, there is a school of thought that during his travels around India, Samartha Ramdas met the sixth Sikh Guru Hargobind at Srinagar.

The reported interaction as quoted in “Pothi Panjah Sakhian’ goes as follows:

Fully armed and riding a horse, the Guru had just returned from a hunting excursion. ‘I had heard that you occupied the gaddi of Guru Nanak?’ said Samarth Ramdas. Guru Nanak was a tyagi sadhu – a saint who had renounced the world. You are wearing arms and keeping an army and horses. You allow yourself to be addressed as Sacha Padshah, the True King. What sort of a Sadhu are you?’ Guru Hargobind supposedly replied, ‘Internally a hermit and externally a prince. Arms mean protection to the poor and destruction to the tyrant. Baba Nanak had not renounced the world but had renounced maya [self and ego].” These words of Guru Hargobind found a ready response In the heart of Ramdas, who said, ‘this appeals to my mind- “यह हमरे मन भावती है’.

He found in the words of the Guru an expression of his own inner spirit and latent Ideas. While Samartha Ramdas did not take up arms himself, he saw the need to rouse society from its slumber to rise up against it’s subjugation. For this, he saw the need to emphasize the importance of physical strength along with knowledge for individual development. He argued that only the strong and those with a fighting spirit would be able to establish the rule of dharma, and expressed admiration for warriors and their role in safeguarding society. In this attitude we also see a modern echo in Swami Vivekananda who, while lecturing some young men on the importance of physical fitness, said, “You can be closer to God through football than the Bhagavad Gita”

Samartha Ramdas initiated his mission in the year 1644 by performing prana pratishta of a murti of Lord Rama at Chafal. Later, Shivaji Maharaj would provide a land grant for this ashram. But more to the point of rousing the masses to physical fitness and kshatriya spirit, he established temples of Hanuman in towns and villages. He initially had eleven Hanuman temples constructed in various regions of southern Maharashtra (hence the title of my post). These are now commonly referred to as the 11-Maruti. We can see how Samartha Ramdas contributed to the success of Shivaji’s mission without grooming the king directly, and quite separate from his role as rajaguru.

Another important aspect of Samartha Ramdas’ work was that he understood the importance of the role of women in a harmonious society.

He encouraged women to participate in religious work and gave them positions of authority. Ramdas had many women disciples, including many prominent ones who had responsibility for managing some of his centers. He strongly reprimanded an old man who was against women participation by saying that “everyone came from a woman’s womb and those who did not understand their importance were not worthy of being called a man.”

Like numerous saints of the medieval period, Ramdas also abhorred distinction based on caste.

Ramdas also composed numerous spiritual works, with the dasbodh being his magnum opus. The great Guru breathed his last in 1682 at Sajjangad, a fortress which was given to him by Shivaji for his residence.

At the time of his departure from the world, it is said that a dazzling light emanated from his body. Could this have actually happened?

This has a modern echo in the light that emanated from the body of Sri Ramana Maharshi in 1950 and traversed the sky as something slower than a shooting star. Thousands saw it, including my great grandfather. He spontaneously remarked to my father “Look, Ramana Maharshi is going”. Sri Ramana had been ill for a long time and his passing was quite expected but the fact that thousands, including the famous French photographer Henri Cartier Bressen who had a knack for being present at momentous occasions but otherwise had no special connection to Sri Ramana Maharshi, also connected the light to Ramana says something about this cultural memory of a dazzling light emanating from Samartha Ramdas’ body. May that light continue to protect our Dharma.