Upanayana: a Hindu rite of passage 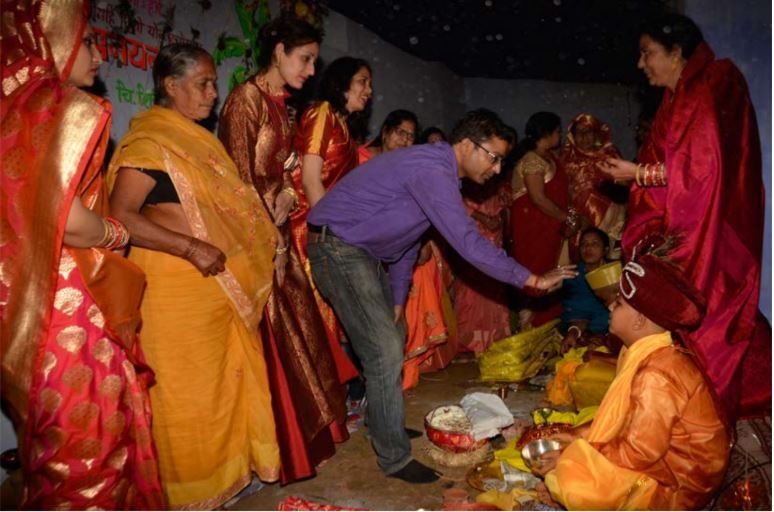 Rites of passage transport you into a new realm of living. In Hinduism, these are known as samskara.

One of the most poignant of these is called upanayana, which marks the beginning of the acceptance of a student by a guru and an individual’s entrance to a school in Hinduism.

During this event, children between eight and sixteen years of age (typically boys, but girls are also allowed to undergo upanayana) receive a sacred thread, called janeu, which they must wear for the rest of their lives. They are also taught the secret of life through brahmopadesam (revealing the nature of Brahman, the ultimate reality) or the Gayatri mantra. This qualifies the pupil’s acceptance into Vedic studies.

On February 15-21, my brother Shivesh Jha and my cousin Shiven Jha, underwent their own upanayana ceremonies based on traditional Mithila Brahmin customs.

Mithila, which refers to the region of the ancient Videha Kingdom and includes parts of both the Indian state of Bihar and the nation of Nepal, is influenced heavily by Goddess Durga and her teachings. As such, all the procedures outlined below apply to only this subsection of India.

February 15: The Day of the Shagun

All female members of the family, especially grandmothers, apply haldi, (turmeric) oil and dub grass to the boys’ foreheads, arms, stomach and legs. This is called ubtan. To preserve the symbolic meaning of rebirth, the pupils are not allowed to wash it off until the end of the ceremony.

After this happens, the family members invite their respective Kuldevi or Kuldevta, a deity that is worshiped by only their particular clan. For my family, this meant offering prayers and alms to the goddess Chinnamasta, a ferocious aspect of Devi, who symbolizes both life and death, temporality and immortality, and destruction and recreation.

February 17: The Day of the Mandap Puja

To ensure that everything goes smoothly and without interruption, all members of the family make their way to various temples, requesting the weather gods to be on their side. This happens early in the morning, for our family at about 6:00 am.

Once it gets closer to the afternoon, the village (including the family) makes its way to the Kuldevi temple.

A series of mantras are chanted, and a goat is brought in. The pupils worship the animal, thanking it for its sacrifice and role in the upanayana ceremony. The head priest then ushers all people outside. He then slits the goat’s throat, serving it to Mata Chinmastama as an offering.

Such animal sacrifices do not occur in all villages. Rather, it is dependent on the customs of the region, as well as the preference of the Kuldevi or Kuldevta.

The goat is then cooked and served in a bhojan (feast) with all villagers in attendance.

After this, the gods Ganesh and Agni are formally invited to the ceremony. A small kalash (vase) is filled with water and put at the mandap, the place allocated for puja purposes.

By now, all guests, from both the mother and father’s side, have arrived. In the evening, a large celebratory dance takes place, where grandmothers sing and the rest of the family dances. The boys are also applied haldi at the end of the day.

February 18: The Day of the Puja

The day of the main puja begins with a prayer and an offering to all ancestors, as well as more dancing and singing.

The grandmothers, mothers, and the pupils visit five houses in the village, asking for blessings. Then there is a two and a half-hour puja, in which the pupils (in this case, my brother and my cousin) chant various mantras while ladling oil into a fire.

A series of rites begin, where the boys are given special garments for their period of discipleship. They also receive the Gayatri mantra during this process.

After this initial puja, the boys go to their mothers, asking for bhiksha (alms and blessings). This tends to be an emotional procedure, with the mother usually shedding a couple of tears.

The boys then make their way to the temple, where, with aide and support from their sisters, their hair is cut. This symbolizes the beginning of a new life, one in which the boys are disciples of the Vedas.

The pupils are then ordered to take a brief two to three minute shower (after not having bathed for a couple of days) and wear new clothes given to them by their mother’s side of the family. They also wear a pair of wooden sandals called khadau and a yellow hat called a pagg.

The boys once again make their way back to the mandap, where eleven male brahmins stand, reciting the Gayatri mantra. It is in this moment that the boys receive their jeanu, wearing it over the left shoulder and under the right arms, signifying their entrance into Vedic studies. Each boy is then made to stand of a stone slab, symbolic of the firmness of resolve that must accompany a life of learning.

After a series of mantras, the main puja finally ends, and the boys go to all the female members of the family, asking for gifts. These presents are carefully selected months prior to the event, and usually consist of gold jewelry and clothes.

To conclude the event, the family once again celebrates through song and dance. The main part of the upanayana ceremony has ended, and the boys are now true brahmins.

February 21: The day it ends

On February 21, the boys make their last journey to the mandap. Their head is shaved once again, with a tiny sikha, or a lock of hair, protruding out from the back of the crown.

As newly reinstated brahmins, the pupils are expected to uphold their commitment to education for as long as they live. They are to carry themselves with a sense of honor and duty, and to avoid impurity, dirtiness and immoral behavior. Above all, they are expected to carry on the Vedic tradition, to ensure that its teachings and reflections are applied to every crevice of Hindu society.