What it's like to grow up African American, and a Hindu - Hindu American Foundation
AdvocacyOn The Issues 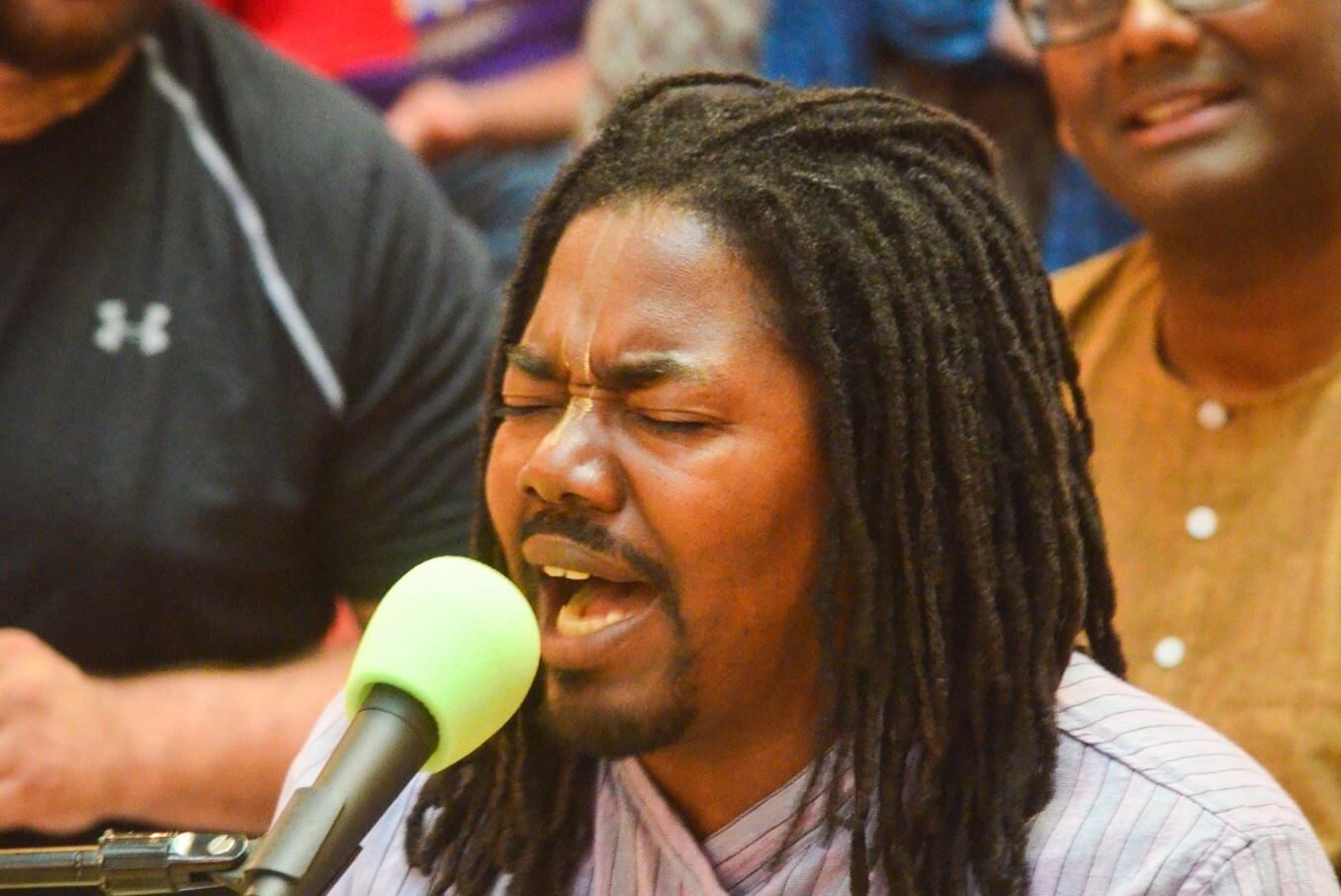 The challenges of growing up as part of a minority religion in the US is an experience Hindus understand incredibly well. After all, with about 2.3 million adherents, according to a 2014 “Religious Landscape Study” by the Pew Research Center (this number has grown in the past seven years), Hinduism is followed by roughly 1 percent of the country’s population.

While great efforts have been made over the decades to shed light on such challenges within the context of America, what’s often been overlooked are the many challenges that exist within the faith itself, especially in regards to race. Of the study’s reported 2.3 million, 2 percent (roughly 46,000) identified as African American, making them a major minority within a minority.

The following is an interview with Ananta Vrindavan, an African American whose family joined the International Society for Krishna Consciousness —  a religious organization that teaches the Hindu tradition of Gaudiya Vaishnavism — when he was 4 years old. Now 53, he shares some of his thoughts on the African American Hindu experience.

HAF: How/when did you and your family come to ISKCON? What do you remember about that time?

Ananta Vrindavan: My mother was introduced to ISKCON in 1972 by a devotee named Labangalatika. My memories of that time are very spotty. My early memories are of the temple in Evanston. Some of the physical characteristics, like the layout — I learned later that it was a former YMCA building. I remember the smell of frankincense and the food! I remember elaborate feasts with halava and jalebis. I remember the busyness. Lots of activity going on as it was a major temple of the day.

HAF: What was it like growing up as an African American in a Hindu tradition?

Ananta Vrindavan: A word that comes to mind is confusing. Even as a youngster, I heard the philosophical tenet of “we are not these bodies but spirit souls” and it had an impression on me. I tried to think this way. I did not notice being too different in the beginning. As time progressed, I began to hear things like “You’re a bahuka [the name of a black-bodied figure from a Hindu text that was taken and used by many white caucasians in ISKCON toward African Americans in a derogatory way]. You like to steal and you are lower than the rest of us.” But deep inside I always remembered the principle of not being this body and it somehow kept a line between these statements and the philosophy.

HAF: Did you face any discrimination? If so, how did you respond to it?

Ananta Vrindavan: The racism that I received came as I got older. When I was 11 and 12, I remember the school principal [white caucasian] telling guests and Indian life members that I was from Africa to impress them with ISKCON’s global reach. Wait, I’m from America! It felt to me, however, that it was saying that even these “low” people are coming to the movement. When it came to girls, the different treatment was more acute. Both in the opportunities allowed by the adults as well as feeling like the girls were less attracted to me than my friends. If there was any attempt at accommodating the growing attraction of boys and girls, the African Americans would only be paired with another African American, whether the two liked each other or not.

HAF: Hinduism teaches that we all originate from the same spiritual source and are thus all part of the same spiritual family, despite external appearances. Do you see a disconnect between this and the way Hindus treat each other? Why do you think this is, and what might be a solution?

Ananta Vrindavan: I definitely see a disconnect between the philosophy of Hinduism and its application. I think this is because the focus is more on man’s lower consciousness stemming from lust, anger, avarice, greed and the need to be better than others. The solution to me is obvious. Focus on the core concepts of the philosophy above all else and continue to evolve and allow our higher consciousness to dictate our actions as opposed to our lower consciousness. It begins by seeing all of our fellow human beings as our brothers and sisters — as a part of us, really.

HAF: What part of the tradition, if any, helped you overcome the various challenges you endured?

Ananta Vrindavan: The fact that I am bigger than my current circumstances, and that those “temporary” circumstances do not define me. Like the body that I find myself in currently. Or the country that I was born in or what religion or political party or whatever other “identity” that we take on. Also, to attempt to have the higher understanding to see everyone equally. To not be too disturbed by the ups and downs of life. To have equilibrium.

HAF: What has kept you connected to the tradition all these years?

Ananta Vrindavan: What has kept me connected to the tradition are the core spiritual concepts that we are eternal spirit and are all connected as part of the greater Whole. When I was 7 years old, I memorized the entire second chapter of the Bhagavad Gita. Verses 12 through 28 especially, where Krishna speaks to the impermeable nature of the soul, had a lasting impact on me. The fact that I was more than the temporary body somehow spoke to me. The idea of seeing and experiencing the dualities of this world — victory/defeat, happiness/distress, heat/cold — and to be able to see it all from a higher perspective really appealed to me. It just felt right. Like tools to assist me. I could experience this world yet not get too high or too low. It gives some measure of inner peace.

HAF: How has your Hindu upbringing shaped who you are today and what does your daily spiritual practice look like?

Ananta Vrindavan: My Hindu upbringing has aided in my being a more open-minded person and has helped give me a more balanced perspective on life. My daily spiritual practice is mindfulness and simply trying to “live” the tenets that I feel add value to this life experience. Though I’m not always as consistent as I’d like to be, I try to do some meditation and breathing every morning.

HAF: What, in your view, is the most important thing Hindus can do to combat bigotry or prejudice in their communities?

Ananta Vrindavan: The most important thing that Hindus can do to combat bigotry in their communities is place more emphasis on what’s really important. The phrase “begin with the end in mind” is useful. When one is really sick or on their deathbed, is it really important what religion or nationality we have? Treat others how we would like to be treated. Basic stuff!

HAF: What is your hope for the future, and how do you think that future can become a reality?

Ananta Vrindavan: My hope for the future is that as human beings we learn to not only see our differences but what unifies us as well. Acintya beda beda tattva [a theological tenet of Gaudiya Vaishnavism]. We are all simultaneously one yet different. We are all beautiful expressions of the Divine. More “spiritual leaders” focusing on this instead of dogmatic stances that ultimately serve no one.