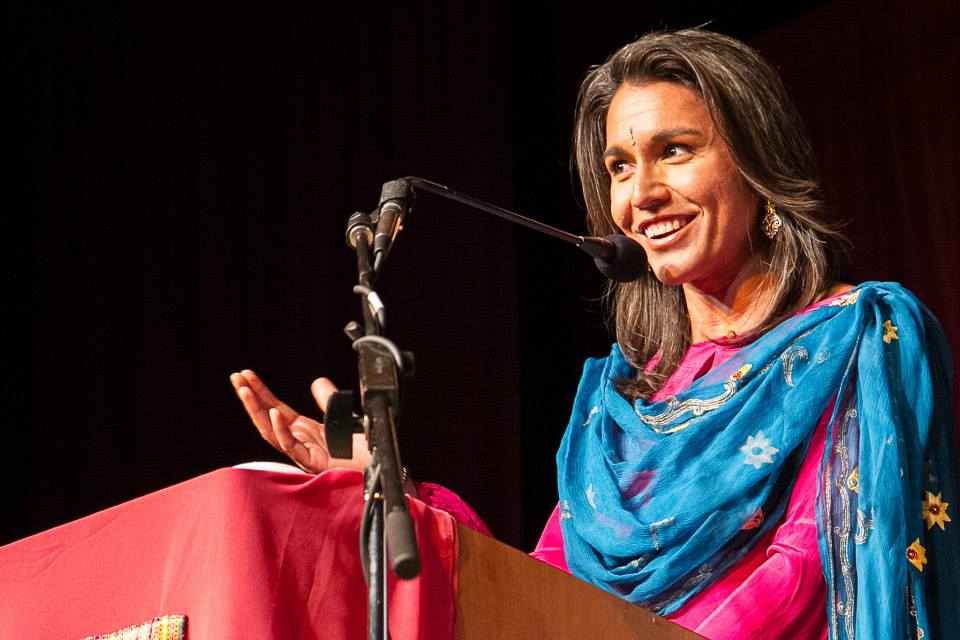 Tulsi Gabbard entered the House of Representatives nearly five years ago. The Hawaiian Democrat represented a Hawaiian constituency, but she captivated 3 million Hindu Americans when she openly espoused her Hindu faith and took her oath on the sacred Bhagavad Gita–one of Hinduism’s holiest books. But as Gabbard’s star rises in politics as a compelling leader, Hindu Americans are increasingly dismayed that even after half a decade, the Hindu faith that inspires Gabbard, is to some journalists, a millstone around her neck.

In the November 6, 2017 issue of the New Yorker, Kelefa Sanneh offers an 8000 word profile of Gabbard entitled, “What does Tulsi Gabbard believe?” But any notion that Saneh is interested in what Gabbard believes about progressive politics, about Sanders, about Trump, about climate change–just about anything that a politician would be asked about–is dispelled when a full 4000 words, entirely half of the essay, is yet another project in otherizing Gabbard’s faith journey.

Hinduism is a decentralized religion with clear core beliefs, and Vaishnavism has hundreds of millions of practitioners, with as many gurus (teachers), and as many ways of expressing love and devotion to God. But Sanneh seems intent on portraying Gabbard’s Vaishanvism as aberrant–even cultish.

Most Hindus will claim fealty to a guru-shishya parampara (teacher-student tradition). A guru is respected, Hindus will prostrate to her or him with a Namaste–”the divinity in me bows to the divinity in you.” They will respect her, listen to sermons, learn meditation techniques and the various branches of yoga. They will even deify the guru as a form of divinity itself. But then, Hindus go out and live their lives. The guru is a guide, not a master, and certainly not a controller. But Sanneh seems intent to insinuate that Gabbard, and by extension, any Hindu that claims a guru, is remote-controlled by that guru, just as John F. Kennedy was smeared as being answerable to Papal Authority and Mitt Romney had to defend his Mormon faith.  In short, rather than allowing Gabbard to self-define her Hindu faith in her words, Sanneh arrogates the authority to define her religion as nothing more than the terms of a guru.

If all of this is not enough, Sanneh indulges in the de rigeur linking of Gabbard to India’s Prime Minister, Narendra Modi. Forget Obama’s bromance with Modi, or that Trump and dozens of legislators have traveled to India to promote ties between the two largest democracies, but somehow Gabbard’s visits to India to promote bilateral ties are suspect. Sanneh even demeans the term, Hindu American. The term “blurs the line between faith and identity,” Sanneh asserts. Leave alone that “Muslim-American” or “Jewish American” are common parlance. “Judeo-Christian” is the default descriptor of modern American life, but somehow the term “Hindu American” blurs lines?

Today, four members of the U.S. Congress identify as Hindu American. Will Pramila Jaypal (D, WA), Ro Khanna (D, CA) and Raja Krishnamoorthi (D, IL) be entitled to claim their spiritual journey without having to prove that they are their own person with personal spiritual beliefs and political ideology? If they name a guru, will they too bear the burden of proving that they are not taking marching orders?

I wrote before of a religious litmus test that applies to American politics.  Bobby Jindal and Nikki Haley renounced their Hindu and Sikh faiths, respectively, during their political journeys to gubernatorial wins, and have never looked back.  They sensed early on, perhaps, that Hinduism is too misunderstood–too exotic and distorted–to carry the burden of claiming.  Tulsi Gabbard is the first Hindu American politician to reach Congress–and in the eyes of many, lay claim to higher office.  And so Tulsi Gabbard is finding out–for all Hindu Americans–how arduous the task is in today’s America to proclaim her Hindu faith.  To walk a lonely, dharmic path that Jindal, Haley and many others, foreswore.