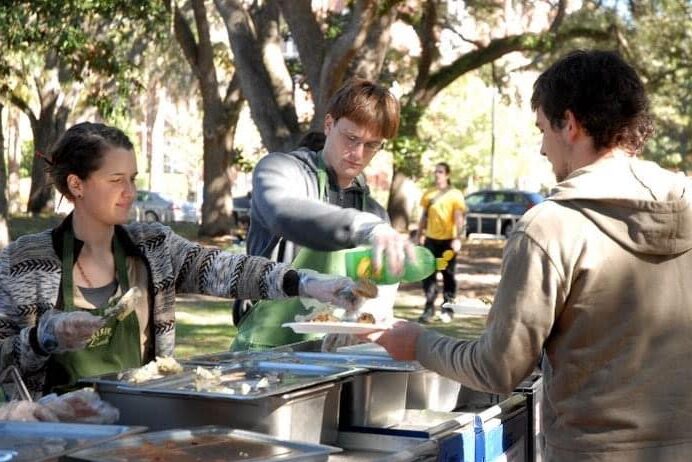 Being raised in a Hindu tradition whose religious customs centered primarily around bhakti yoga, the practice of connecting to the Divine through acts of loving devotion, my parents and elders would regularly infuse in me the importance of striving to live a life of dana (giving) and seva (selfless service).

While growing up, however, because the real estate of my mind was generally occupied with a focus of playing sports, hanging with friends, and attempting — usually unsuccessfully — to talk to girls, very little space was left for actually contemplating such teachings, which seemed rather basic and obvious to me anyways.

Yet, as I shifted from the frivolous and free years of teenagehood and settled into my twenties, questions of identity and purpose settled in as well. I thus did what many who are lost and confused often do. I looked to my roots for answers.

Picking up the Bhagavad Gita, a philosophical text revered not only by bhakti practitioners, but by all within and outside the Hindu diaspora, I read about how selfless service is more than just a virtue to live by, but an impetus that is imbedded in our very being. As fire’s purpose can be determined by its nature — to give off heat and light — our purpose too is determined by our true nature, which is spiritual. The Divine is within us all, and as such, the suffering of others should not be seen numbly as having nothing to do with us. If we all originate from the same divine source, then we are all part of the same spiritual family, and should naturally want to help one another.

Thus, giving purely for the unadulterated desire to uplift others, not out of selfish motives, is extolled throughout Hindu scripture as being the process by which we can learn to let go of mundane material attachments and cultivate the spirit of renunciation required to become liberated from samsara, or the cycle of rebirth and death.

A nice example of such selflessness can be found in the Hindu text, Srimad Bhagavatam, which describes a story about a man named Rantideva who had fasted for 48 days.

Once, as Rantideva was about to break his fast, a guest appeared. Honored to receive him, he offered the guest a part of his meal, which the man ate before eventually leaving. Just as Rantideva was preparing to eat what was left, a second visitor appeared. Wanting to satisfy the man’s hunger, Rantideva divided what he had between him and the second guest, who also ate and departed. Settling down to eat the remaining portion, yet a third hungry man arrived. Giving away the last of his food, Rantideva bid the man farewell, and contentedly proceeded to simply quench his thirst with water. As fate would have it, however, a fourth man appeared. Tired and thirsty, he begged Rantideva for something to drink.

Unhesitatingly giving the man his water, Rantideva said that he did not pray for the perfections of mystic yoga described in scriptures, nor even liberation from birth and death. He instead wanted only “to stay among all living entities and suffer all distresses on their behalf, so that they may be freed from suffering.”

Going further, Rantideva declared, “By offering my water to maintain the life of this poor man, who is struggling to live, I have been freed from all hunger, thirst, fatigue, trembling of the body, moroseness, distress, lamentation, and illusion.”

Perceiving the Divine in all beings, he was fully cognizant of the intimate spiritual bonds connecting everyone, and therefore felt deep compassion for all. As a result, actual joy for Rantideva came not from material objects, which are temporary in nature, but from bestowing kindness based on a foundation of spiritual understanding

Though this type of spiritual outlook is relatively easy to comprehend on a theoretical level, it’s far more difficult to actually put into practice. After all, Rantideva was clearly a highly enlightened individual, whose actions were far beyond what most normal human beings could hope to emulate.

Indeed, most of us are not free from all material desires, hence, most of us display some level of selfishness as we attempt to acquire the things in life we believe will make us happy. As conveyed in the story of Rantideva, however, true happiness does not come from fleeting material objects, but is actually derived from giving out of sincere compassion.

Learning to give, and give without hopes of achieving anything in return, is therefore the gateway to real and enduring fulfillment.

But by what method can we become more selfless and giving? How can we pull ourselves out of our self-centeredness and learn to look to others who are in need?

The answer to this question, which is as simple as it is profound, is provided not only within Hindu scriptures, but within most religious scriptures existing in the world. It’s none other than gratitude.

Practicing daily gratitude allows us to experience appreciation for everything we’ve been given in life and consequently makes us want to give back in thankfulness. Such gratitude is what drives us to sacrifice our time, energy, possessions, etc., for the benefit of somebody else.

Keeping this in mind, and having concluded my twenties this year — a decade spent largely complaining about the things I didn’t have and believed that I deserved, I enter my thirties with the hope of shifting my consciousness to one of gratitude, giving, and sacrifice.

For sacrifice is service, and selfless service is the true path of joy.