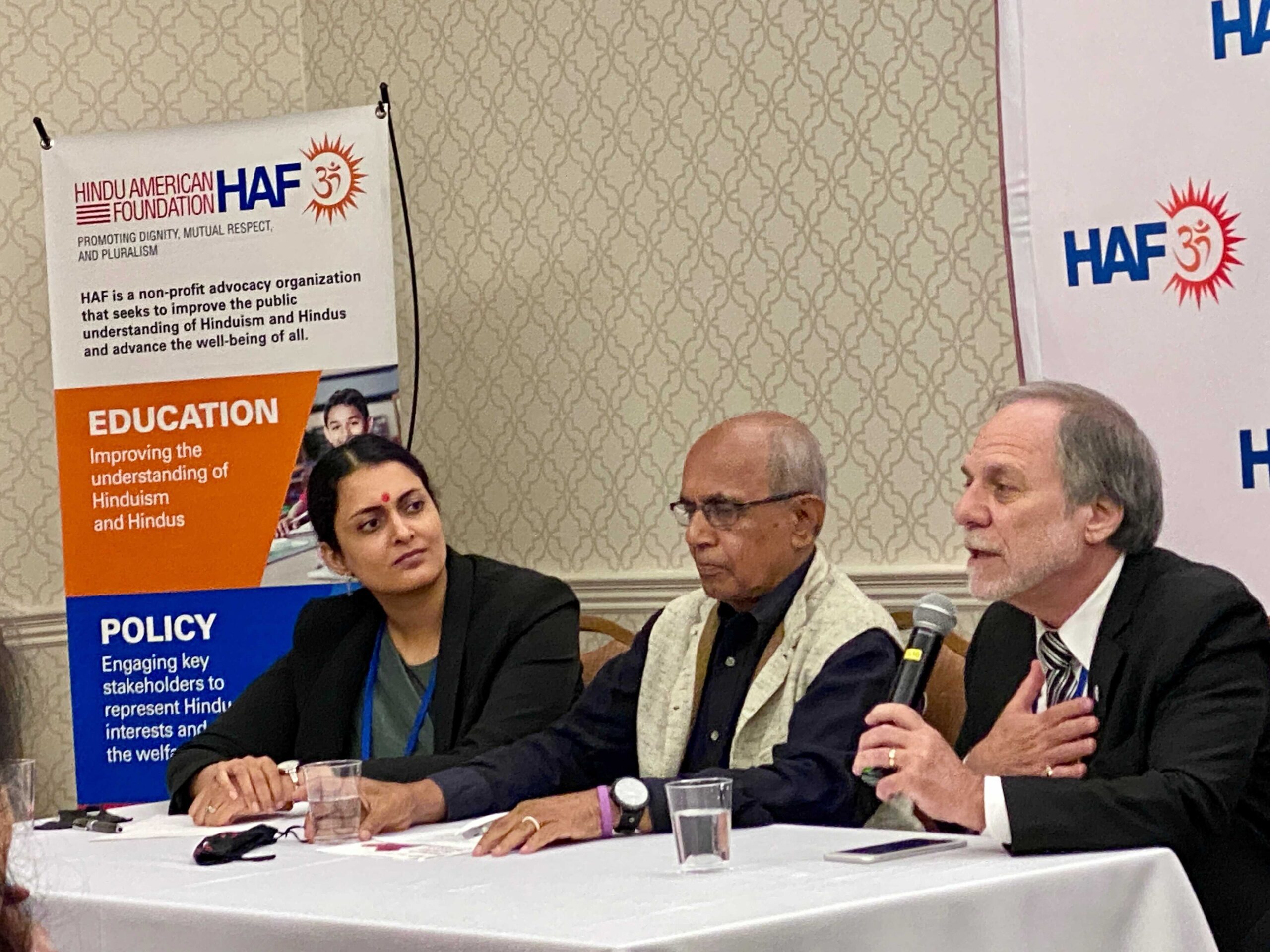 The first annual International Religious Freedom Summit convened on July 13-15, 2021 in our nation’s capital to highlight the increasing threat that religious minorities around the world currently face. As a convening partner of the Summit, the Hindu American Foundation (HAF) hosted a panel discussion entitled “Religious Freedom in Bangladesh 1971-2021: From Genocide to Today,” highlighting the 1971 genocide and its ramifications today, how Bangladesh turned away from its secular constitution in 1988 and declared Islam its official state religion, and the status of Hindus, Buddhists, Christians and other religious minorities in Bangladesh over the last 50 years.

The panel featured Dr. Sachi Dastidar, Distinguished Professor of the State University of New York and the Founder and Chairman of the Board of the Indian Subcontinent Partition Documentation Project, who comes from a refugee family from Bangladesh; Deepali Kulkarni, Director of Human Rights, Hindu American Foundation; and Dr. Richard Benkin, independent human rights activists and author of ‘A Quiet Case of Ethnic Cleansing: the Murder of Bangladesh’s Hindus.’ The panel was moderated by Taniel Koushakjian, Director of Public Policy, Hindu American Foundation who serves as Chairman of the International Religious Freedom Roundtable South Asia Working Group.

HAF Executive Director Suhag Shukla, Esq. opened the program with an invocation and welcomed members of the audience who participated in-person and who watched the live stream online. She also drew the audience’s attention to a physical exhibit on display during the event, meant to educate attendees on the basics of Hinduism as well as some of the human rights violations Hindus are facing in South Asia.

Prior to introducing the panelists, Koushakjian offered remarks about the U.S. role in trying to prevent mass atrocities and genocide. He pointed to Archer K. Blood, U.S. Ambassador to Bangladesh (then called East Pakistan), and his famous ‘Blood Telegram’ cable to then-U.S. Secretary of State Henry Kissinger wherein he described the crimes being committed by the Pakistan Army as genocide and objected to U.S. policy towards Pakistan and the Bengali victims, the majority of whom were Hindu. Koushakjian called Blood an upstander for human rights and a “Hindu Ambassador Morgenthau,” in reference to Henry Morgenthau, the U.S. Ambassador to the Ottoman Empire, who in 1915 objected to U.S. policy towards the Empire as the Armenian Genocide was unfolding.

Kulkarni began by providing an overview of the events of 1971, why they occurred, and how the Pakistan army systematically carried out targeting killings over a nine month period in a deliberate case of religious cleansing and genocide. “Genocide doesn’t begin all at once, but entails a gradual shift in thoughts, practices, and laws, which normalize violence against groups over time,” she said. Military intervention by India stopped the Pakistan Army’s genocidal campaign which ultimately took the lives of over 3 million people, over 200,000 women were raped in rape camps established by Pakistan Army, and over 10 million people were displaced, mostly Hindus, who sought refuge in camps across the border in India.

She also urged listeners to visit the HAF web portal, genocide1971.org, which detailed the 1971 genocide, and which has now been banned in Pakistan by the Pakistan Telecommunication Agency.

Next, Dr. Dastidar gave a wide-ranging presentation on the status of Hindus and other religious minorities over the last 50 years. He highlighted persecution he witnessed when his family fled Bangladesh and settled in the U.S., the government and non-state actors’ confiscation of land belonging to Hindus, as well eye-witness testimony from his travels to Bangladesh, particularly the pogroms in the 1990s. Dastidar also discussed the moderate Bangaldeshi Muslims who were killed for trying to prevent Bangladesh from moving away from its secular constitution. In 1988, Bangladesh declared Islam as it’s official state religion. Dr. Dastidar also showed the yearly decline of the Hindu population in Bangladesh, a gradual and slow purging of the country’s largest religious minority that currently faces extinction.

Lastly, Dr. Richard Benkin provided a sobering analysis of the government of Bangladesh today and the previous administration, and the government’s complicity in the religious freedom violations taking place in Bangladesh. He also described how the U.S. can leverage its relationship to push the government to stop these crimes against humanity as they have only increased during the outbreak of the COVID-19 pandemic. In reference to recent attacks, Benkin stated that in the 66 days of the first lockdown period, “I was able to document, and I used very rigorous standards, 85 serious, multi-crime incidents targeting Hindus. While the government of Bangladesh enforced social distancing and other effect reducing methods, it didn’t do so when they were violated to attack Hindus,” he said.

“We are grateful to our esteemed panelists for their insightful presentations and the eye-opening data that they provided on the situation that Hindus and other religious minorities face on a daily basis in Bangladesh,” stated Shukla. “As long as Bangladesh authorities continue to permit violence against Hindus, HAF will continue to urge Congress and the White House to place Bangladesh on the State Department’s ‘Special Watch List’ for religious freedom violations,” Shukla said.