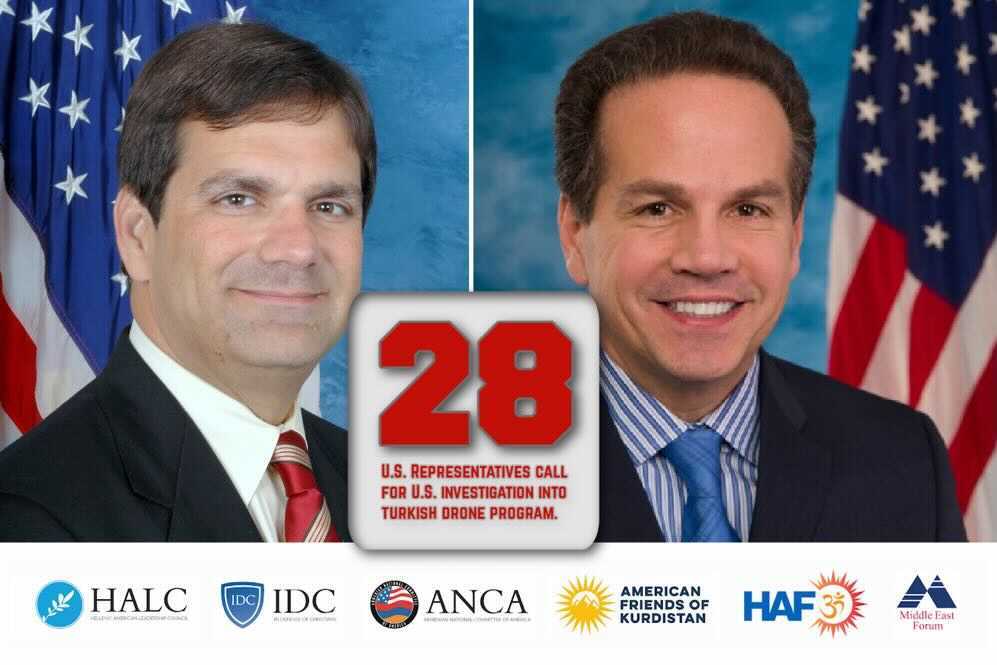 Turkey’s sale of combat UAVs to Pakistan, and Turkish-Pakistani joint production with Russia Concerns US lawmakers

Twenty-six US Representatives have joined Rep. David Cicilline (D-RI) and Rep. Gus Bilirakis (R-FL) in a bipartisan call upon the State Department to suspend export licenses for US drone technology to Turkey, pending an official investigation into the destabilizing role of Turkey’s drone programs in the Caucasus, South Asia, the Eastern Mediterranean and around the globe—a move strongly supported by the Hellenic American Leadership Association (HALC), Armenian National Committee of America (ANCA), American Friends of Kurdistan, Middle East Forum, In Defense of Christians, and the Hindu American Foundation (HAF).

The letter comes on the heels of the first-ever Pakistan sponsored terror drone attack in the Indian Union Territory of Jammu & Kashmir, which took place in the early morning hours of June 27th.

In a bipartisan letter sent last week to Secretary of State Antony Blinken, the 28 US Representatives asked him to issue a report on the ramifications of Turkey’s drone industry with special attention to whether they include US technologies that violate US sanctions. “Turkey has entered into agreements to sell drones to Poland and Pakistan and is discussing the joint production[4] of armed UAVs and anti-drone defense systems with Russia and Pakistan,” the letter states. “The potential for these drones to further destabilize flashpoints in the Caucasus, South Asia, the Eastern Mediterranean, the Middle East, and North Africa is too great to ignore,” they wrote.

Hindu American Foundation Director of Government Relations and Policy Taniel Koushakjian noted, “The Hindu American Foundation applauds Reps. Ciciline and Bilirakis for their leadership and all of the signatories for sounding the alarm over the announced joint production of combat UAV’s by Turkey, Pakistan and Russia. Pakistan’s introduction of terror drone warfare in Kashmir last month is an emerging threat to peace and stability in the region and the response from the US and world leaders must be swift.”

“Turkey has for too long treated its privileged relationship with the American defense industry as a license to disregard America’s core interests, its values, and its partnerships around the world. Turkey’s drone program is but the latest way this purported ally threatens American interests – and arguably violates American law. Bravo to the 28 members of the House led by Representatives Cicilline and Bilirakis for putting the spotlight on this threat. Turkey’s disingenuous charm offensive has fallen flat and now it is back on defense,” said Endy Zemenides, executive director of the Hellenic American Leadership Council.

ANCA executive director Aram Hamparian noted, “We want to thank Reps. Cicilline and Bilirakis and each of the more than two dozen legislators – Democrat and Republican – who joined in this bipartisan call for Turkey to be held to account. A State Department investigation is long overdue into Turkey’s drone program – with a special focus on the discovery of US parts in the Bayraktar drones deployed by Azerbaijan against the indigenous Armenian population of Artsakh.”

We are writing to express our concern over Turkey’s armed unmanned aerial vehicle (UAV) program, which has destabilized multiple regions of the globe and threatens U.S. interests, allies, and partners.

As a result of our long-standing alliance, Turkey has received favorable terms from the American defense industry, including co-production rights for weapons systems, advanced weapons sales, and technology transfers. Despite decades of close cooperation, Turkey chose to violate that relationship by purchasing the Russian S400 missile air defense system in violation of U.S. law – the Countering America’s Adversaries Through Sanctions Act (CAATSA). So far, the Turkish government is undeterred, and it has been reported that Turkey is purchasing a second S400 system from Russia.[1]

Turkish actions have continued to run contrary to its responsibilities as a NATO member state, despite its ejection from the F35 joint strike fighter program and the imposition of sanctions. These actions include the proliferation of drones.

Over the last year, Turkish drones have been deployed by Azerbaijan against Armenian civilians in Artsakh, Syria; against Kurdish forces that have partnered with the U.S. in the war against ISIS; and in Libya’s civil war. Turkey has entered into agreements to sell drones to Poland[2] and Pakistan[3] and is discussing the joint production[4] of armed UAVs and anti-drone defense systems with Russia and Pakistan. Turkey has also declared its intention to establish a permanent drone base in occupied Cyprus,[5] which will deploy attack drones from its amphibious assault ships.[6]

The potential for these drones to further destabilize flashpoints in the Caucasus, South Asia, the Eastern Mediterranean, the Middle East, and North Africa is too great to ignore. In a recent Wall Street Journal report on Turkey’s program, retired U.S. Army Lieutenant General Mike Nagata said that Turkey’s drones were “part of a much larger challenge regarding the future of the relationship between Turkey and the United States and NATO.”[7]

We also wish to note that battlefield evidence from Artsakh confirms that Turkey’s Bayraktar drones contain parts and technology from American firms and U.S.-based affiliates of foreign firms.[8] The continued transfer of such technology appears to violate arms export control laws and run afoul to CAATSA sanctions that Congress has imposed on Turkey, especially its Savunma Sanayii Baskanligi (SSB) (Turkey’s Presidency of Defense Industries).

We request a briefing from the Department of State that details potential ramifications of Turkish drone proliferation, employment, and sales; whether or not Turkey is developing UAV’s with materials or technologies that would be in violation of currently imposed sanctions; and whether Turkey’s actions constitute yet another violation of NATO rules and bylaws. We further urge an immediate suspension of any export permits for U.S. drone technology to Turkey pending a State Department review.