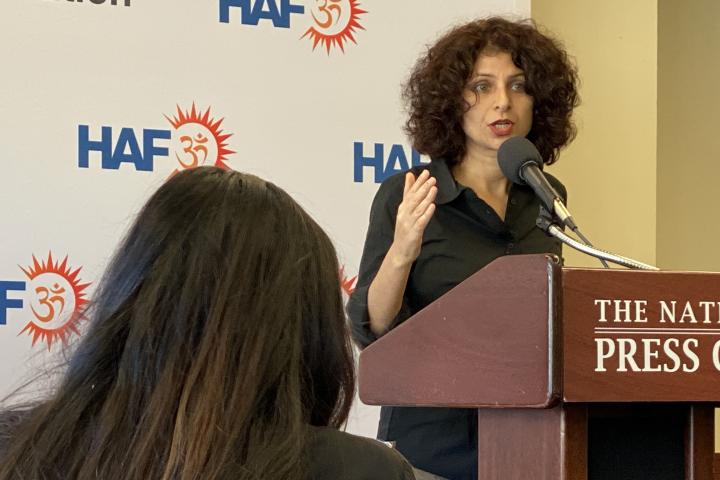 Award-winning veteran journalist Aarti Tikoo Singh has reported on and from the region for nearly two decades, most recently from inside the Kashmir Valley since August 5th, when the government repealed the discriminatory Articles 370 and 35A of the Indian Constitution.

Members of the press were invited to hear her eyewitness account, learn about the history of the region, particularly the ethnic cleansing of over 300,000 Kashmiri Hindus (aka Kashmiri Pandits) in 1989-90, as well as her recommendations for the government of India and US policy in the region, and what the future should hold in store for the people of the now-Union Territories of Jammu and Kashmir, and Ladakh. Besides Kashmir, she has reported from other conflict zones of India — Chhattisgarh, Jharkhand and Assam, which was also discussed.

“The Hindu American Foundation is delighted to host an accomplished journalist like Aarti Tikoo Singh here in the United States,” stated Suhag Shukla, Esq. HAF Executive Director. “Today, she offered a powerful voice for the truth to the Western media narrative on Kashmir that has, unfortunately, gotten so many things wrong. We are pleased to give her and members of the press an opportunity to hear about her encounters with everyday Kashmiris in the days and weeks after the historic decision on August 5th,” Shukla said.

In addition to her presentation at the National Press Club, earlier in the week Ms. Singh testified before the U.S. House of Representatives’ Foreign Affairs Subcommittee hearing on ‘Human Rights in South Asia’ which was mostly Kashmir focused despite its stated objective. During her testimony, Ms. Singh presented the facts of her on-the-ground reporting as the only witness on the panel that was inside the Kashmir Valley.

“Who is the victim in Kashmir? The victim is 65-year-old Ghulam Mohi-ud-din Mir of Parimpora, Srinagar” who “just weeks ago, on August 29th, was shot dead. By whom? By Pakistan sponsored terrorists. Why? Because he had dared to open his shop, defying the orders of Jaish-e-Mohammad––the same terror group responsible for the kidnapping and beheading of Wall Street Journal reporter Daniel Pearl in 2002,” Singh said in her testimony to Congress.

Aarti Tikoo Singh is in the United States for a three-week long whirlwind tour. In addition to her presentations before Congress and the National Press Club, Tikoo will appear at Princeton, Columbia, Pennsylvania, and Brown universities.

Prior to joining the Times of India, Ms. Singh worked with other major national publications in India and has written opinion pieces in various national and international publications. She holds two Master’s degrees in Political Science and English from the University of Jammu, and is an alumnus of Columbia University where she earned a Masters in International Affairs. During her time in New York, she worked briefly at Columbia University, the United Nations and the BBC.

Watch video from the event: