US House hearing on Kashmir falls short on facts, decorum on Capitol Hill 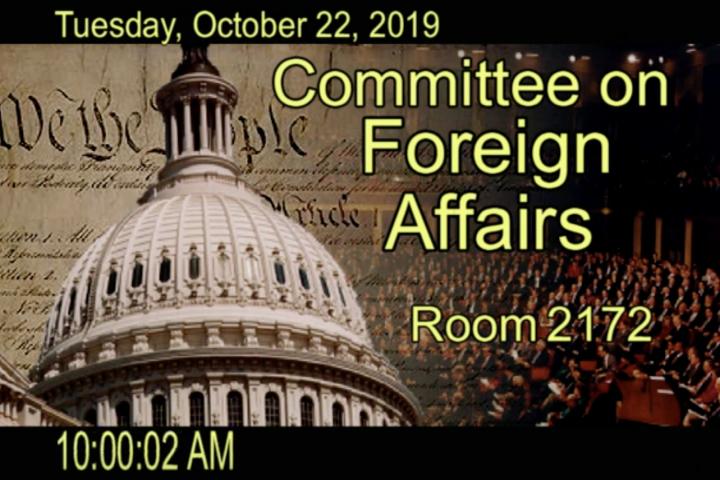 This week, the House Foreign Affairs Subcommittee on Asia, the Pacific, and Nonproliferation held a hearing entitled Human Rights in South Asia: Views from the State Department and the Region. Under the Chairmanship of Rep. Brad Sherman (D-CA) and Ranking Member Rep. Ted Yoho (R-FL), the hearing consisted of a morning panel focused on US foreign policy with US Department of State officials Alice G. Wells, Acting Assistant Secretary, Bureau of South and Central Asian Affairs, and Robert A. Destro, Assistant Secretary Bureau of Democracy, Human Rights, and Labor.

During the first panel, Assistant Secretary Wells (pictured below) rightly pointed out that while the State Department shared the concerns expressed by Members of Congress about the manner in which the August 5 decision was being implemented, it had also urged the Indian Government to restore internet and mobile services, and hold promised state assembly elections at the earliest opportunity.

Wells was also unapologetic in her written testimony which stated that the US, “welcomed Prime Minister Imran Khan’s recent unambiguous statement that terrorists from Pakistan who carry out violence in Kashmir are enemies of both Kashmiris and Pakistan. Pakistan’s harboring of terrorist groups like Lashkar-e-Taiba and Jaish-e-Muhammed, which seek to foment violence across the Line of Control, is destabilizing, and Pakistani authorities remain accountable for their actions. We believe the foundation of any successful dialogue between India and Pakistan is based on Pakistan taking sustained and irreversible steps against militants and terrorists in its territory.”

HAF board and staff members, who were present at the hearing, welcomed the US government’s position that the August 5th move to repeal the discriminatory Articles 370 & 35A of the Indian Constitution is an internal matter for India that did not change any ground reality, and that neither Pakistan nor China has grounds on which to raise complaints, especially given Pakistan’s ceding territory to China in 1963 – whereas China was never a party to the Kashmir conflict, and that territory today is a critical part of China’s Belt and Road Initiative in Asia.

Furthermore, HAF welcomed the strong condemnation by US government officials of Pakistan-supported terrorist groups and the destabilizing role they play in the region, namely Jaish-e-Mohammed, Hizbul Mujahideen, and Lashkar-e-Taiba, the later being responsible for the notorious 2008 Mumbai terrorist attacks as well as the kidnapping and brutal beheading of Daniel Pearl, Wall Street Journal South Asia Bureau Chief, in 2002.

“The US government’s position regarding the administrative changes in the Indian territories of Jammu and Kashmir, and Ladakh, as well as the US government’s recognition that Kashmir is an integral part of India is in lock step with the Hindu American community,” stated HAF Executive Director Suhag Shukla.

Although the panel was supposed to reflect “views from the region,” Ms. Tikoo Singh (pictured, right) was the only witness on the panel who was on the ground, inside the Kashmir Valley on August 5 and in subsequent weeks. In fact, no other witness was in the region, nor even on the continent. As the only eyewitness, journalist Aarti Tikoo Singh, when given the opportunity, gave a raw and detailed account of her first-hand experience of what really transpired in Kashmir in the days and weeks immediately following the repeal of Articles 370 & 35A on August 5, 2019.

“If Members of Congress, particularly those who sit on the House Foreign Affairs Committee, were really interested in learning about the situation in Kashmir, you would think they would have asked the one person who was actually there,” stated Shukla. “Unfortunately, Ms. Singh was overlooked by several Members of Congress who were either present merely to advance their own self-centered political agenda, or they were just afraid of her,” Shukla said.

Ms. Singh, who is in the United States on a speaking tour sponsored by HAF, provided oral and written testimony focused on her interviews with people in Kashmir, access to healthcare and communications, as well as highlighting the fact that the biggest killer in Kashmir today is terrorism.

In a new low for the House Foreign Affairs Committee, controversial Congresswoman Ilhan Omar (D-MN) (pictured, right) used her time on the dias to try to discredit the testimony of Aarti Tikoo Singh in a question directed at another witness, then got up and left the hearing without affording Ms. Singh the opportunity to respond. After HAF brought this fact to the attention of the Committee, Chairman Sherman gave Ms. Singh thirty seconds to respond to Omar, who had long left the hearing room. HAF notes that Ms. Singh was an invited witness of Chairman Sherman and that Rep. Omar’s unprecedented behavior to attempt to discredit the Chairman’s witness is in effect an attempt to discredit the Chairman himself.

“This hearing demonstrated a new level in the history of the Committee. A witness like Angana Chatterjee, with well-documented ties to Pakistan spy Ghulam Nabi Fai and his associates, was given a free pass, while an award-winning journalist like Aarti Tikoo Singh had her credibility questioned by Rep. Omar without an opportunity to respond directly,” said Shukla. “This hearing was neither objective nor concerned with fact-finding. It was devoid of the democratic protocol that makes this the ‘people’s house.’ Sadly, it was a missed opportunity for Members of Congress, and quite frankly, the American people, who were watching at home,” Shukla said.

In addition, the ongoing plight of the exiled, indigenous Hindu population of Kashmir, also known as Kashmiri Pandits, was outright downplayed in the one reference to the historical ethnic cleansing, and was entirely overlooked by committee members. HAF Board Member, Rajiv Pandit, who was present at the hearing, noted, “At one point in the hearing it was said that the Kashmiri Pandits ‘left’ the Valley of Kashmir. That is flat out wrong. We didn’t leave. We were pushed out of our ancestral homes in 1989-90, after witnessing the brutal killing of our community members. The forced exile of 350,000 Kashmiri Pandits thirty years ago meant that we were ethnically cleansed from our homeland. Any hearing on human rights in Kashmir that does not reflect the jihad waged against Kashmir’s Hindu population is completely without merit,” Pandit said.

Despite the lopsided nature of the hearing, Ranking Member Rep. Ted Yoho (R-FL) appropriately chided Pakistan Prime Minister Imran Khan to “take care of your own house before you worry about your neighbors,” reflecting the strong sentiment on Capitol Hill that the Islamic Republic of Pakistan has become a theocratic, state sponsor of terrorism that runs counter to US interests. For example, the non-profit think-tank Freedom House ranks the Pakistan occupied portion of Kashmir as “not free,” whereas the now-Indian Union Territory of Jammu and Kashmir is ranked as “partly free.”

Sindhi American activist Fatima Gul courageously spoke about the multitude of issues plaguing the Islamic Republic Pakistan. She gave voice to millions of religious and ethnic minorities in the region, especially Hindu and Christian girls in Pakistan, who face kidnapping and forced conversions to Islam on a regular basis. Surprisingly, neither Chairman Sherman, who co-chairs the Congressional Sindh Caucus, nor other Representatives in attendance, raised this issue.

Also missing from the discussion was the gross human rights abuses taking place throughout South Asia, particularly in Bangladesh where religious minorities face strong discrimination from the government.

“The Hindu American Foundation will always fight for the inalienable rights of Kashmiri Pandits, and other religious minorities in Kashmir and throughout South Asia,” stated Shukla. “It is our moral obligation to set the record straight even when our elected officials don’t have the political will to do so,” she said.