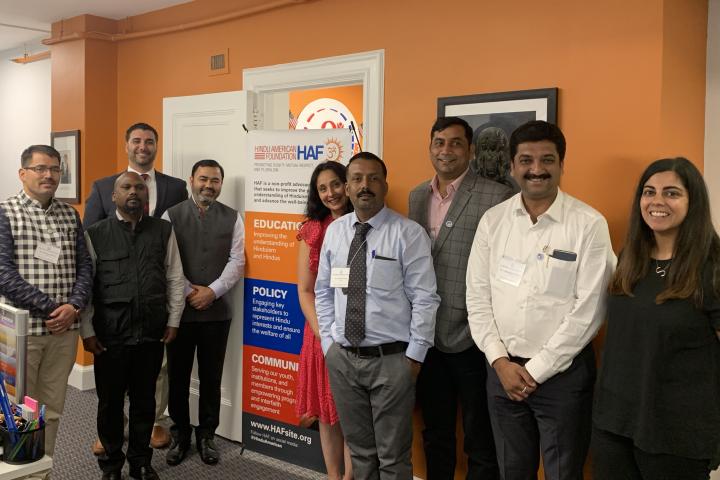 Last week, the Hindu American Foundation welcomed a delegation of local elected officials, civil society leaders, and journalists from India to HAF’s Washington, DC office. The delegation is in the United States as part of the US Department of State’s International Visitor Leadership Program focused on “Pluralism in US Society,” and to learn about the ethnic, religious, linguistic, and racial diversity in US culture.

Objectives of the IVLP include exploring the underlying values of US pluralism and their constancy in the changing face of political, economic, and social circumstances; examining US policies, stakeholders, and key players related to immigration and citizenship; illustrating the civic programs that socially, politically, and/or economically empower immigrants, youth, and minority groups in marginalized communities; and highlighting the contributions made and challenges faced by minority groups in the United States.

The delegation was welcomed by HAF Executive Director Suhag Shukla, Esq. who introduced the delegates to HAF staff, shared the organization’s mission and vision, and discussed the history and primary work of HAF in the fields of education, policy, and community relations.

“We were honored to host the delegation, share about our work, and discuss some of the shared challenges in advocating for peace and pluralism in both the US and India,” said Shukla. “And the conversations contrasting the different understandings of secularism and free speech in our respective democracies were mutually enriching,” she added.

Next, Dr. Shereen Bhalla, HAF Director of Education, presented HAF’s important education initiatives like Hindu American Awareness and Appreciation Month, which was officially proclaimed in California this month, as well as showcased HAF’s educational materials such as the Gandhi toolkit to mark the occasion of his 150th anniversary of birth. She also discussed her role in working with educators and administrators to advance an accurate and appropriate portrayal of Hinduism in American classrooms.

“This visit was very special because we were able to share our efforts with the delegates and hear their concerns and the work they are doing to strengthen education and civil society in India,” stated Dr. Bhalla.

The delegates were also introduced to HAF’s policy and advocacy programs by Taniel Koushakjian, HAF Director of Public Policy. He shared HAF’s activities on Kashmir, the annual Advocacy Day on Capitol Hill, as well as HAF’s domestic and foreign policy priorities. “It was wonderful to meet this delegation and expose them to the important work that HAF does day in and day out,” Koushakjian said.