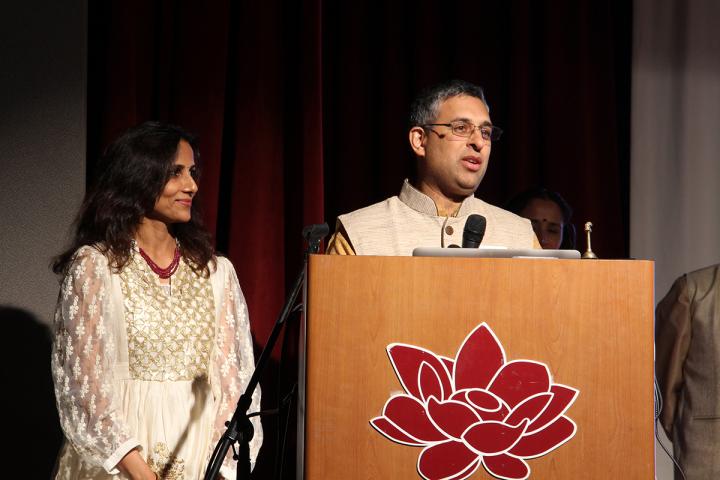 The Foundation’s signature event in California kicked off with an interactive social hour, featuring art exhibits by world-renowned artist Karthik Trivedi, whose artwork has adorned the White House and Buckingham Palace, and up and coming high school artist Chinmayi Shukla.

In addition to musical and dance performances, keynote speaker, Dr. Jeffery D. Long, enthralled the audience with a lively discussion on the Hindu themes interwoven in the iconic Star Wars movie series.

Other featured guest speakers included the Honorable Waytha Moorthy, Malaysian Senator and Minister for National Unity and Social Wellbeing, who traveled all the way from Malaysia, and Ohio State Representative Niraj Antani, the youngest elected official in the Ohio State House. Both speakers highlighted the important advocacy work of HAF.

They were joined by a number of government officials (and staff members), who similarly celebrated HAF’s advocacy work by presenting commendations, including:

HAF also honored Garth Pickett, a member of the Church of Jesus Christ of Latter-Day Saints and Founding Member and Treasurer of the Silicon Valley Interreligious Council with the 2018 HAF Mahatma Gandhi Award for the Advancement of Pluralism and Yogi Chugh, community leader and Commissioner on the Fremont Economic Development Commission with the 2018 HAF Pride of the Community Award.

“This was an historic event for HAF in California given the diverse array of government, interfaith, and community leaders, as well as artists and entertainers in attendance supporting HAF’s mission of promoting dignity, mutual respect, and pluralism,” said Katir. “With the generous support of the community, the future is bright for Hindu American advocacy.”