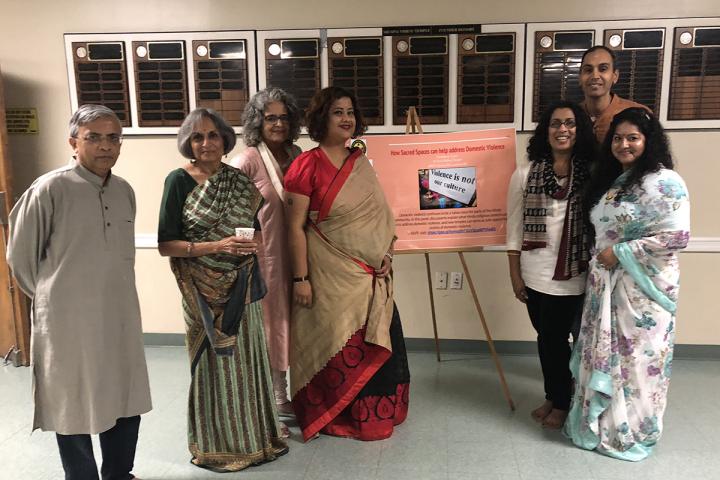 Lanham, MD (October 5, 2018) — Marking Domestic Violence Awareness Month, the Sri Siva Vishnu Temple hosted a townhall on what religious centers and other sacred spaces can do to combat domestic violence and other forms of violence.

The townhall, hosted by the SSVT’s Center for Dharma Education, was organized to draw attention to domestic violence, and why it has been a taboo issue for the Hindu American community and other South Asian populations. Speakers shared their stories of survival from domestic and gender based violence situations, and called on religious organizations to do more to provide spaces for survivors and their families.

According to Dr. Revathi Vikram, president of ASHA, domestic violence in South Asian communities is multi-layered, because it involves more than just the victim and perpetrator. She said domestic violence often involves in-laws, children, and other members of the family and community, who either act as bystanders or intervenors.

Indo-Caribbean Hindu activist Aminta Kilawan-Narine shared her experiences of being a survivor, noting that it was difficult for her to escape dating violence because dating itself was viewed as taboo. She was finally able to escape, and says she hopes institutions like the SSVT can take the lead in providing spaces for survivors.

Fellow panelists Krittika Ghosh, executive director of the Asian/Pacific Islander Domestic Violence Resource Project, and Nandini Assar also discussed some of the short and long-term consequences of violence. Ghosh also worked to dispel myths about violence. Panel facilitator Razia Kosi also noted some of the mental health issues related to domestic violence, while pointing out that the violence can take different forms.

SSVT Board member Vasu Murthy began the town hall by noting the Hindu theological underpinnings for nonviolence and love for all beings, and urged the audience to live up to the highest scriptural ideals.

The townhall was co-sponsored by HAF, Hindu American Community Services Inc (HACS), ASHA for Women, Chinmaya Mission Washington Regional Center, Sewa USA, ISKCON of DC, Georgetown Hindu Life, and Indiaspora. The SSVT plans to continue to raise awareness about domestic violence. Next month, the temple will host a forum on mental health and the Hindu community.

“The Hindu American community’s efforts to combat domestic and gender based violence, coupled with the larger Desi community’s efforts, can hopefully build a sustainable network of resources to survivors,” said Murali Balaji, SSVT Center for Dharma Education committee member. “It’s our job to continue building a loving and inclusive space together.”