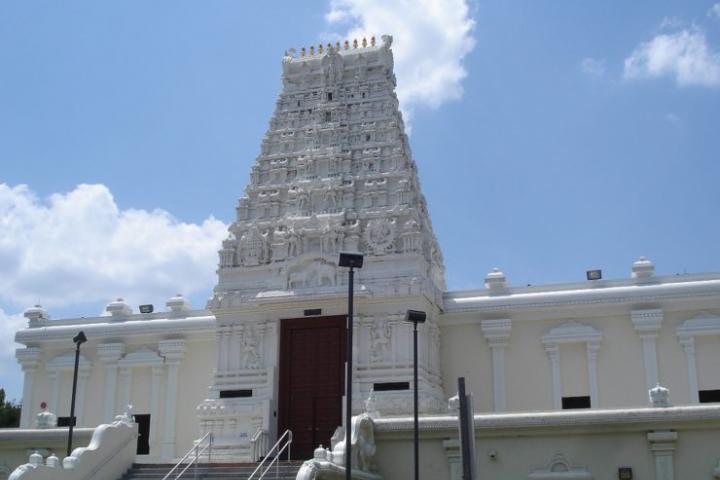 Washington, DC (June 21, 2018) — In honor of LGBT Pride Month, the Sri Siva Vishnu Temple, in Lanham, Maryland, hosted a town hall discussion on June 16 about what the temple could do to make queer Hindus feel more included.

The event, “Creating Spaces for LGBTQIA Hindus,” was co-sponsored by the SSVT Center for Dharma Education, HAF, and Indiaspora.

Moderated by Sivagami (Shiva) Subbaraman, the director of the LGBTQ Resource Center at Georgetown University, the panelists talked about their experiences coming out and the struggles they had to overcome reconciling their sexual identities with their religious identity.

SSVT co-founder Dr. Siva Subramanian and BOT member Vasu Murthy opened the discussion by noting that Hinduism’s scriptures do not vilify LGBT identities, but noted that the scriptural openness is not always reflected in the attitude of many Hindus. They noted the SSVT’s statement on creating an inclusive space for LGBTQIA Hindus, which read:

“Hinduism is an all inclusive and open way of life that teaches that all beings are equal. To honor those scriptural ideals, SSVT’s Constitution forbids discrimination against any one on the basis of race, gender, religion etc. The recently formed Center for Dharma Education — whose task has been to engage younger generations of American-born Hindus — has done several events based on the relevant issues in the society such as non-violence, socially conscious parenting etc.

Based on the CDE’s initiative, the SSVT is undertaking a dialog about how those who identify as both LGBTQIA and Hindu have reconciled those identities, and how the temple can help make them feel included and integrated into the larger Hindu community. SSVT is undertaking this discussion to bring the community together for an open dialog, and find a way to make sure all of our community’s voices are heard and respected.”

Subbaraman and panelists Swarna Chowdhuri, Mytili Jagannathan, and Harsh Voruganti said they appreciated the temple’s willingness to host the discussion. Members of the audience, including some who identify as queer, added that they felt more welcomed as a result of the event. The event was standing room only, with some traveling from as far away as Pennsylvania just to attend.

CDE chair Rohit Setty and former HAF education director (and current consultant) Murali Balaji noted that the townhall was just the first step in creating a long-term space for queer Hindus. The SSVT Board also said they would work to do more to provide support for community members and their families.

“We need to do more to uphold our scriptural ideas,” Balaji said. “Hopefully our queer family members will feel that the SSVT is a welcoming and loving space as we build on this.”

The SSVT is working on engaging more Hindus, and others, on important topics through the CDE’s townhall series. Townhalls on domestic violence and mental health, respectively, will take place in the fall.

HAF co-sponsored the event as a continuation of its advocacy on behalf of LGBTQIA issues.