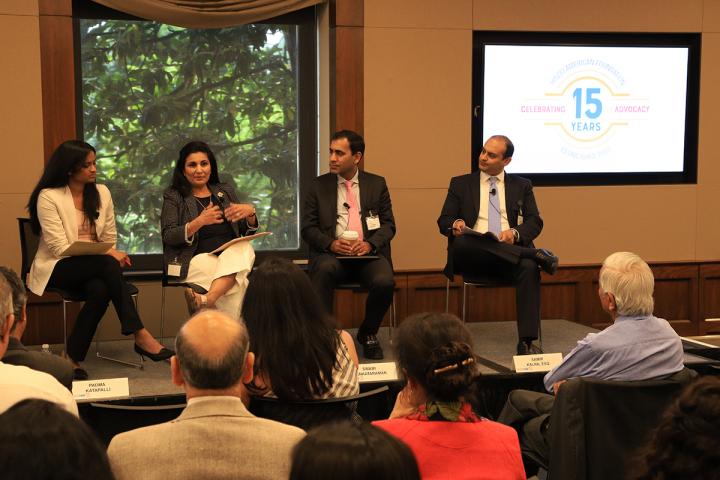 Keynoting the event was Nisha Desai Biswal, President of the US-India Business Council. Biswal, who was honored in 2015 by HAF for her previous work in the State Department, spoke to the growing realization in America of the immense opportunity that India represents.

“Businesses are seeing India as a primary focus for investment,” Biswal went on to say. That indeed there would be points of friction between the US and India on trade, “but I would not see them as a point of alarm, but as a point of opportunity,” she concluded.

Biswal’s keynote was followed by a lively and frank panel discussion on the need for immigration policy reforms to the way in which green cards are allotted and the challenges facing spouses of immigrants working in the United States under the H-1B high skilled worker visa program. The panel was moderated by HAF Managing Director Samir Kalra, Esq. and featured immigration advocate Padma Katapalli of GC Reforms, immigration lawyer Akanksha Kalra, Esq., and HAF National Leadership Council member Swami Venkataraman, who spoke about his own experience navigating the US immigration system.

Issues highlighted by the panelists included: the increasingly long time it takes to obtain a green card due to arbitrary per-country caps on the number of green cards given annually; the precarious nature of employment for H-1B visa holders, and their spouses, waiting for green cards; and how the current trends in US immigration policy are driving away tourists, students, and potentially high skilled workers and the business that hire them.

The afternoon began with an emotional and poignant conversation between HAF Executive Director, Suhag Shukla, Esq. and Ms. Shanthi Viswanathan, a teacher from Marjory Stoneman Douglas high school in Parkland, Florida whose quick thinking and bravery is credited with saving the lives of her 27 students during the shooting there this past February.

After detailing the horrifying sequence of events of the tragic day when a teen gunman killed 17 people and wounded 17 more at the school, Ms. Viswanathan made a passionate plea for more effective regulations of firearms, as well as giving her frank opinions on what needs to be done to make our schools safer places.

“I understand the Second Amendment, hunting rifles, shotguns, but an assault rifle? What is the need for that?” she asked the audience rhetorically.

Viswanathan said she’s asked this question of ardent gun rights supporters. The answer she’s told is that they need these weapons for ‘freedom’’. But, “how does holding an assault rifle give you a sense of freedom?” she wondered. “I wouldn’t know how to explain ahimsa (non-violence) to them,” Viswanathan noted. “You don’t have to have that gun. Life is still good without it.”

The day concluded with a brief clip of the film “From India With Love”, directed by Mandar Apte. The film documents the journey to India, by a group of former gang members, racial justice activists, and other survivors of violence, who follow in the footsteps of Dr. Martin Luther King’s trip to India nearly 60 years ago to explore the homeland of Mahatma Gandhi. The group becomes transformed by the spiritual and cultural journey, by their time together, and by the discussions and meditation experienced on the trip.

After the film, Apte, the 2018 winner of HAF’s Advancement of Dharmic Arts and Humanities Award, spoke of his work promoting the Hindu concept of ahimsa (non-violence) as a way to mediate conflict to major police departments across the country, foremost of these being the Los Angeles Police Department.