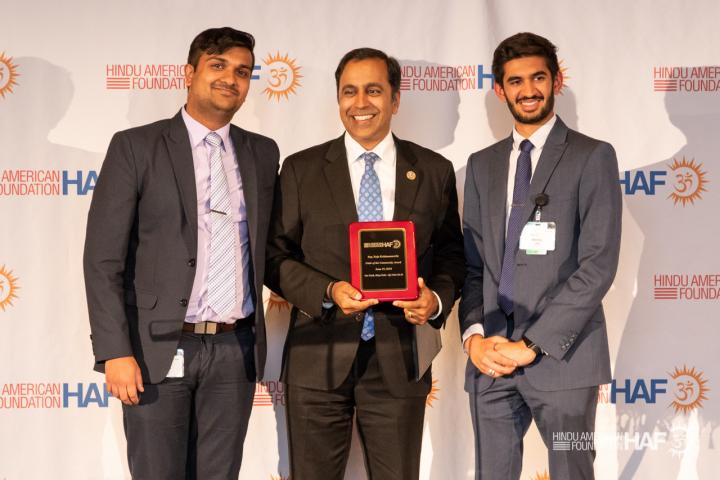 HAF, as in years past, also honored those people who have made significant and positive contributions to the Hindu American community and the wider public over the past year. The following people were lauded in 2018.

Vir Sahu was given the NextGen award for his work in 2017 to make Diwali an official school holiday at his school, Council Rock High School, outside of Philadelphia.

Michael Lieberman, Washington Counsel for the Anti-Defamation League was given the Mahatma Gandhi Award for the Advancement of Pluralism.

In his acceptance speech, Lieberman emphasized the critical importance of the Hindu and Jewish communities working together to promote religious respect and pluralism. Lieberman noted: “The First Amendment of the Constitution was designed to protect against religious discrimination, not as a sword to thwart anti-discrimination laws, or marriage equality, or women’s rights.”

The 2018 HAF award for the Advancement of Dharmic Arts and Humanities was given to film director Mandar Apte.

Apte’s film “From India With Love” documents a journey to India, inspired by the journey Dr. Martin Luther King took to explore the homeland of Mahatma Gandhi, by a group of former gang members, racial justice activists, and other survivors of violence. The group becomes transformed by the experience, by their time together, and by the discussions and meditation experienced on the trip. Apte has since worked to promote the Hindu concept of ahimsa (non-violence) as way to mediate conflict to major police departments across the country, foremost of these being the Los Angeles Police Department.

Unique to this year’s event was the presentation of two Dharma Seva awards.

The first of these was bestowed upon Shanthi Viswanathan, teacher at Marjory Stoneman Douglas high school in Parkland, Florida, who is credited with saving the lives of her 27 students during the mass shooting there earlier this year.

Reflecting on the shooting, Ms. Viswanathan told the audience she now feels angry in many ways — that a 19 year old could purchase a weapon of war and “mow down so many innocent people”, and that “we hear suggestions to arm our teachers and make our schools look like prisons, as our representatives fail again and again to enact common sense gun control.”

The second Dharma Seva award was presented to Dr. Jeffery Long, a professor at Elizabethtown College (PA), for his tireless work to help the American public understand Hinduism in an accurate way, as a lived tradition, in both academia and our public schools.

“I have been honored to be a servant to the Hindu community. This is a tradition that has touched my life immeasurably,” Long told the audience.

“People do bad things, not because they’re evil, but out of avidya, ignorance,” Long went on to say. “Our job is [to] uproot that ignorance. This is why I think the educational system is so important. The way that Hinduism is presented in media and popular culture is so important. If people have been given a false impression of Hindus and Hindu tradition, is it any wonder that out of that ignorance we see hatred and prejudice, of the kind we’ve been seeing lately.”

Each year HAF also gives a Friend of the Community Award. In 2018, this was awarded to Representative Kevin Yoder (R-KS). Yoder was lauded for his work championing immigration reform, as well as his leadership in the wake of the Olathe, Kansas hate crime shooting that killed Srinivas Kuchibotla and injured two others.

In receiving the award Rep. Yoder gave an impassioned appeal in support of reforming the American immigration system and clearing the green card backlog for high skilled workers and their families. Yoder cited how the wife of Srinivas Kuchibotla, Sunayana Dumala, faced deportation if she returned to India for the funeral of her murdered husband, because doing so would have jeopardized her immigration status as a spouse of an H-1B visa holder. Yoder told the audience that though Dumala has since obtained her own H-1B visa and returned to the United States, the case highlights the precarious nature of the current US immigration system.

Finally, Representative Raja Krishnamoorthi (D-IL) was given HAF’s Pride of the Community Award, which is bestowed upon an individual who has demonstrated excellence in a field of public interest, elevating the stature of the Hindu American community as a whole.

Krishnamoorthi, one of four Hindu members of Congress, noted that they represent a variety of political viewpoints, as does the Hindu American community, but that we all share commitments based on our faith, “non-violence, vasudhaiva kutumbakam… a belief in truth, a belief that we are put on this planet to do our duty, to help other people, and to leave this Earth a better place than how we found it.”

He commended members of the audience for their work in their respective communities and contributions to the country, but said, “I would ask you step it up, even more. It’s time to do our civic duty.”

“I hope that some of you, or your children, or grandchildren may run for city council, or state senate, or the United States Congress,” he concluded.