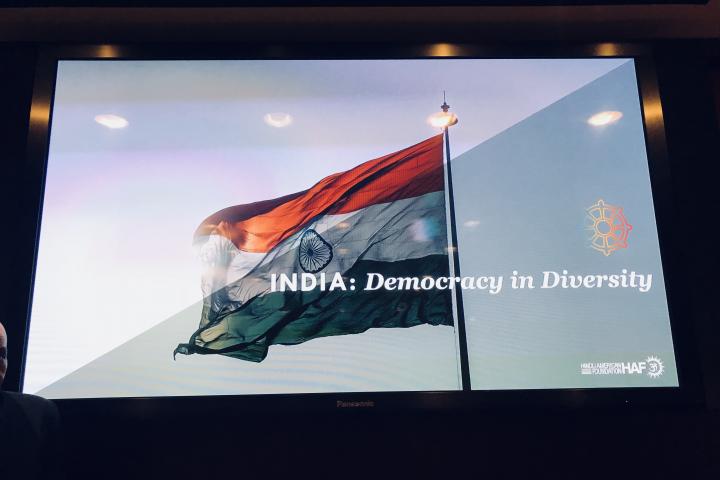 Washington, DC (August 1, 2018) — As a side event to the first ever State Department Ministerial to Advance Religious Freedom, the Hindu American Foundation (HAF) hosted a Capitol Hill Briefing last Thursday on the state of religious freedom in India. The event featured representatives from a cross-section of India’s religious communities, who provided their diverse perspectives on religious freedom in India.

While all of the speakers highlighted India’s historic pluralistic ethos, each of them shared their own unique story and experiences.

The official representative of His Holiness the Dalai Lama in the United States, the Honorable Ngodup Tsering spoke to how India has, for more than half a century, offered a place of refuge for Tibetan Buddhists, displaced from their country by Chinese occupation.

Brigadier Behram Panthaki, Retired Indian Army Brigadier and Ervad (Priest) of the Zoroastrian Community, and Nissim Reuben, Assistant Director of the Asia Pacific Institute at the American Jewish Committee, spoke respectively of the challenges and opportunities the Zoroastrian and Jewish communities have historically found in India. They both noted that their forebears arrived in India fleeing religious persecution in their homelands, and Reuben specifically mentioned that India was the only country in the world where the Jewish community had not experienced any anti-semitism.

Vijay Sazawal, a member of the Hindu Kashmiri Pandit community — who were subjected to ethnic cleansing nearly three decades ago in the wake of a separatist, Islamist uprising — spoke to the critical importance of understanding the notion of regional minorities to better understand the complexities of inter-religious relations and conflict in India. Though India is nearly 80% Hindu, in some states, such as Jammu and Kashmir, Hindus are in fact a minority population, who have not only been persecuted by their neighbors, but almost entirely cleansed from their ancestral homeland.

Isa Mirza, a policy advisor on human rights, spoke of the syncretic nature of faith communities and practice in India, drawing on his own background of having been raised by a Christian mother and Shia Muslim father. He also spoke to the multifactorial causes of conflict in the country, emphasizing that economic, political, and social factors are often the driving force of incidents which on their face may seem to be driven by religious identity.

Mirza expressed concern that while there may indeed be a possible correlation between rising communal violence in India and the ascendancy of the BJP, he urged the need to parse through the motivations in every incident, some of which are pecuniary in nature and not motivated by actual religious animosity, contrary to how they are reported in the West. He further noted that overall, religious conflict and tensions in India were few and far between, and not reflective of India’s pluralistic ethos.

Passionately illustrating the challenges the Sikh community has faced in India, Harminder Kaur, founder of Sikh Kid2Kid, detailed how Sikhs have been on the frontlines of defending India for centuries, but have at times, especially in the 1980s, been targeted by the Government of India. Despite this sometimes troubled history, Kaur emphasized the societal religious harmony and shared cultural and religious experiences present in India, while recounting the love and emotions she feels for her homeland when she hears the Indian national anthem.

Rounding out the panel, Anand Shah, Indicorps Co-Founder and Board Member, discussed the reality of inter-religious relations on the ground in Ahmedabad and other cities across the country, where he led development projects bringing together diverse communities. Shah described such relations as largely peaceful, collaborative, and symbiotic, albeit with occasional challenges, contrary to the narrative of constant conflict that is often portrayed in the Western media.

Following the panel discussion, the briefing concluded with video remarks from Congressman Raja Krishnamoorthi (D-IL), who sponsored the event.