HAF Mourns the Passing of His Holiness Pramukh Swami Maharaj 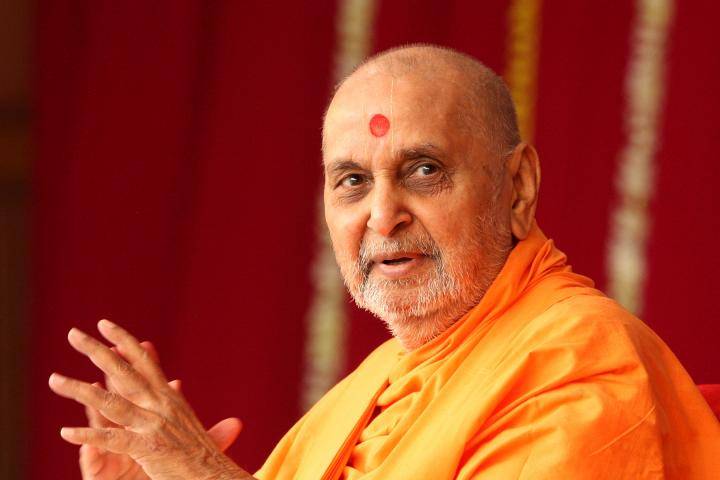 Washington, DC (August 13, 2016) — Leaders of the Hindu American Foundation (HAF) today mourned the passing of His Holiness Pramukh Swami Maharaj, one of the world’s most prominent and respected Hindu leaders and the spiritual head of the Bochasanwasi Shri Akshar Purushottam Swaminarayan Sanstha (BAPS). Pramukh Swami Maharaj, who lived until 95 years of age, dedicated his life to humanitarian service and spiritual upliftment of millions around the world by carrying forward the teachings of Bhagwan Swaminarayan, an 18th century luminary figure who sought to rid society of vice and superstition.

“All of us at the Hindu American Foundation have felt the magnitude of Pramukh Swami Maharaj’s personal blessings to our leaders, shaping our organization and its mission,” said Dr. Mihir Meghani, HAF co-founder and Board Member. “His spiritual wisdom, leadership, and vision in guiding BAPS not just as an organization, but as a movement of the most dedicated and compassionate devotees is his greatest gift to humanity. We all seek to imbibe the values he promoted throughout his life.”

Globally, Pramukh Swami Maharaj inaugurated an astonishing 1100 temples, nearly 100 of which are in the United States. These, especially the five traditionally carved temples made of stone and marble, have become major landmarks across the nation, contributing to the cultural diversity and beauty of America. The Akshardham Temple complex in Robbinsville, New Jersey, currently under construction, will likely be among the largest spiritual centers in the world when completed.

“I personally have been blessed to attend BAPS’ weekly youth services deepening my understanding of Hindu teachings for daily life,” said Jay Kansara, Director of Government Relations. “Nowhere in the world has Pramukh Swami Maharaj’s presence been more felt than in the United States, where as a result of several personal visits here, thousands of families participate in weekly, if not daily, activities to strengthen their Hindu beliefs and practices. The dedicated ascetics and volunteers born in the United States initiated into this movement will carry forward his legacy here in America.”