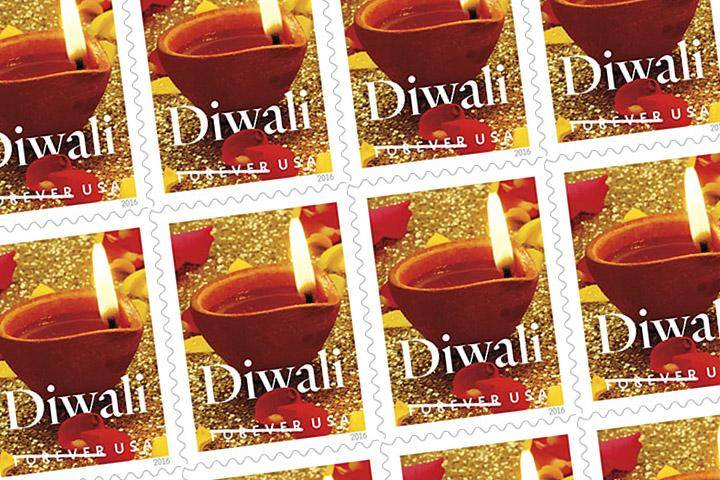 Washington, D.C. (August 23, 2016) — Today we’re celebrating! The United States Postal Service (USPS) just announced that it would issue a Diwali stamp for 2016. The Forever stamp will be released on October 5, 2016, twenty five days ahead of the Hindu holiday. Advocacy efforts over the past year by HAF, Indiaspora and other community organizations, and community members were instrumental in USPS creating a Diwali stamp.

Prompted by a letter co-led by HAF and Indiaspora, more than 100 community organizations petitioned the Citizens’ Stamp Advisory Committee. This was followed by an advocacy day organized by HAF and a community hosted Congressional Diwali celebration at the Library of Congress. In turn, this galvanized support from members of the House and Senate for bipartisan resolutions in their respective chambers in honor of a long standing community request for an official Diwali stamp.

Congresswoman Carolyn Maloney (D-NY), in particular, championed this cause for many years. Senators Mark Warner (D-VA) and John Cornyn (R-TX) and House members Joe Crowley (D-NY), Ed Royce (R-CA) Ami Bera (D-CA), and George Holding (R-NC), all past or present co-chairs of their chamber’s India Caucuses, also led significant campaigns to assure Congressional support for this measure. Congresswoman Tulsi Gabbard (D-HI), the only Hindu member of Congress, led the most recent write in campaign to the USPS with hundreds of signatories.

“HAF is proud to have been a part of what truly was a grassroots community effort,” said Suhag A. Shukla, Esq., HAF Executive Director and Legal Counsel. “The issuance of the Diwali stamp symbolizes several important things: it displays the strength of the Hindu American community when we unite behind a cause; it celebrates the contributions of our community to America; and most importantly, it acknowledges the strength our country draws from its diversity. This year and for many more, diyas and spirits will shine brighter, as will greetings cards and gift packages sent donning the Diwali stamp.”