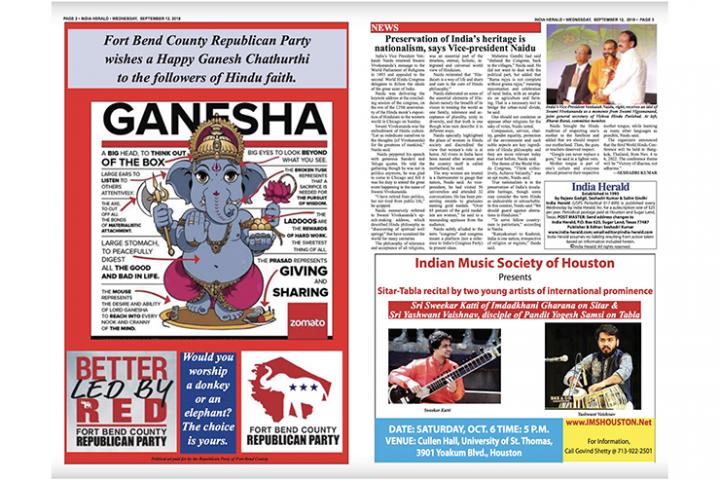 Houston, TX (September 18, 2018) — The Hindu American Foundation today called upon the Fort Bend County Republican Party to clarify its intentions regarding the use of Lord Ganesha in an ad urging support of the Republican Party.

The ad appeared to be an attempt to reach out to Hindus on the occasion of Ganesh Chaturthi and urged Hindu American voters in the county to vote Republican by asking “Would you worship a donkey or an elephant? The choice is yours.”

“While we appreciate the Fort Bend County GOP’s attempt to reach out to Hindus on an important Hindu festival, its ad — equating Hindus’ veneration of the Lord Ganesha with choosing a political party based on its animal symbol — is problematic and offensive,” said Rishi Bhutada, HAF Board Member and Fort Bend County resident.

He further stated that using religious imagery in order to explicitly appeal for political support should best be avoided by any political party.

The implication regarding the worship of animals as gods was also disheartening to HAF leaders, as that is a common misconception taught in US schools, which frequently ends up becoming a taunt used to bully Hindu students.

According to the Foundation’s Media Toolkit, “Although Hindus respect and honor the cow, they do not worship the cow in the same sense in which they worship the Divine. Hindus consider all living things to be sacred, an attitude reflected in reverence for the cow.”

Bhutada also called upon the Fort Bend County Republican Party to apologize for the offensive and inaccurate reference, not run the ad again, and for elected officials in the County to send the same message to the Party as well.

“While HAF was not directly sent the statement made by the Fort Bend County GOP, we do accept their apology. We hope that both political parties make sure not to make a similar mistake in the future while continuing outreach to not only the Hindu community, but all communities in Fort Bend.”

NOTE, this quote has been revised since it was first published.