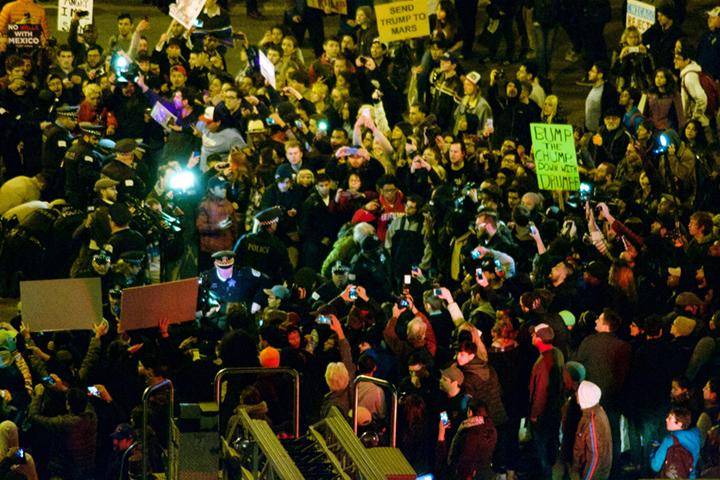 Washington, D.C. (November 15, 2016) — Leaders of the Hindu American Foundation (HAF) are deeply concerned about recent incidents of bias-motivated violence and harassment, as well as violence at protests, following the Presidential election.

Over the past several days, the Southern Poverty Law Center noted a “big uptick in incidents of vandalism, threats, intimidation spurred by the rhetoric surrounding Mr. Trump’s election.”

Nazi symbols have been spray-painted in dorms, on walls, and the ground in attempts to intimidate non-whites. There have been numerous incidents of verbal abuse of non-whites across the country, as well as incidents of Muslim women having their hijab pulled, while being verbally harassed. And though the vast majority of anti-Trump protests have been peaceful, there have been incidents of destruction of property, as well as assaults on Trump supporters and anti-Trump demonstrators alike. A student at Woodside High School in California was also violently attacked by another student for a pro-Trump social media post.

Here at HAF, US-born friends of a Board member were recently told, “Go back to your country.” And a member of HAF’s National Leadership Council was spat at and chased down a street by a person making obscene gestures.

“While feelings surrounding the election may understandably be running high, incidents of hate and violence are unacceptable in a pluralistic, democratic nation operating under the rule of law,” said Suhag Shukla, Esq., the Foundation’s Executive Director.

HAF leaders are encouraged by the words of President-elect Trump in urging his supporters to not harass minorities, but also recognize the unfortunate reality that many such incidents have already occurred and are likely to continue to occur in the days and weeks ahead.

If you or someone you know has been harassed, assaulted or threatened with harm, HAF urges that you not stay silent, and report such acts and threats of violence to law enforcement immediately.

We also ask that that you help us in tracking incidents of identity-based or bias-motivated intimidation, threats, harassment, and violence being experienced in our communities by filling out this form. The more data we have about such incidents, the better we will be able to work with the appropriate authorities, agencies, civil rights advocates, and other stakeholders to identify areas of particular concern and ensure the safety and security of the community. To this end, please share this form widely with your networks.

Also, if you or someone you know believe like you have been or are being discriminated against on religious grounds, HAF’s Know Your Rights provides information about fundamental rights in simple, straightforward terms.

Furthermore, as we have seen numerous incidents of the hateful use of the swastika, presented in an anti-Semitic and Nazi context, HAF encourages everyone to re-acquaint themselves with the multi-thousand year history of this auspicious symbol, sacred to Hindus, Buddhists, Jains, Sikhs, and many other communities around the world. We encourage you to share the hopeful and uplifting meaning of the swastika with your neighbors, community, and elected officials, so that we may slowly replace the hateful usage with the hopeful.

Read more: 10 Things You Need to Know About the Swastika