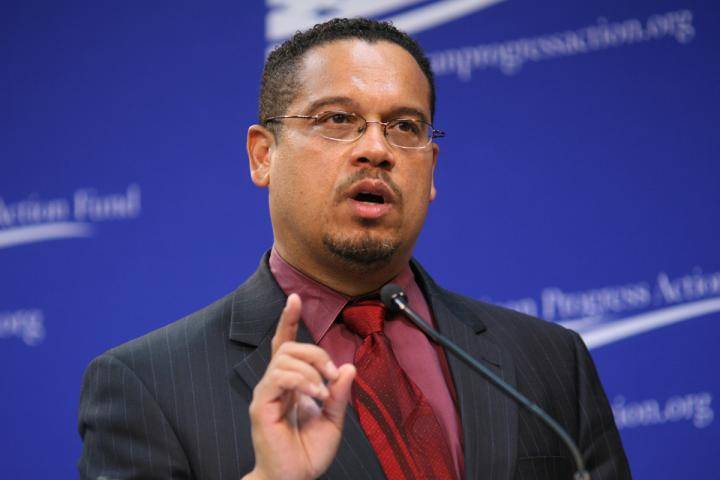 The Foundation announced that it was disturbed by Rep. Ellison’s decade long legislative activism against India, portraying inter-religious conflicts exclusively as one-sided, with the Hindu majority population depicted only as victimizers and religious minorities as victims. Rep. Ellison’s record of co-sponsoring resolutions, congressional letters and statements countered the interests of many Hindu Americans and the broader Indian American community, HAF leaders said, and also gave a platform to certain activists previously accused of Hinduphobia.

“We are actively in touch with Congressman Ellison and his office to understand whether he stands by initiatives he has led admonishing India, and whether his leadership of the DNC would be a vehicle for further such action,” said Suhag Shukla, HAF’s Executive Director. “We want to ascertain that a DNC platform under Congressman Ellison’s leadership would prioritize a strategic partnership with India, the world’s largest and most religiously pluralistic democracy and spiritual homeland for Hindus, and reflect the aspirations of so many Hindu Americans.”

The HAF offices in Washington, DC, are hearing from scores of Hindu Americans disturbed by Rep. Ellison’s bid for the DNC chair, Shukla said, and in response, released the following analysis of Rep. Ellison’s congressional work that most aggrieved the community HAF represents:

Both H.Res. 417 and H.Res. 569 selectively highlighted riots that disproportionately impacted Muslims in India more than a decade previously, but noticeably failed to acknowledge or condemn the ethnic cleansing of Hindus in Jammu & Kashmir, cross-border Islamist terrorist attacks on India, or the status of Hindu refugee populations in India that fled persecution in neighboring Muslim-majority countries. Both ignored the fact that 80 percent of attacks that occurred in India since 2012 had been carried out by the Indian Mujahideen, an Islamist terrorist group banned by the US and India. H.Res 417 was also criticized by observers for its poorly thought-through attempt to interfere with pending national elections in India, and for calling on India to create unconstitutional extrajudicial tribunals solely comprised of representatives of minority communities to prosecute members of the majority Hindu community.

Ellison further failed, HAF asserted, to support initiatives, including H.Res. 396 and a Congressional letter to Secretary Kerry, to protect the human rights of Hindus and other minorities in countries, such as Bangladesh and Pakistan. The protection of human rights is important, HAF’s Senior Director and Human Rights Fellow, Samir Kalra, Esq. contended. But Ellison’s track record seems to privilege the human rights of certain groups over others in India and the larger subcontinent.

“Congressman Ellison has a troubling track record of selective human rights activism in the context of South Asia,” said Kalra. “Though Mr. Ellison demonstrates a determined focus on India, he is glaringly silent as to the plight of Hindu and other minorities in Jammu & Kashmir, Pakistan, and Bangladesh who face institutionalized hurdles, as well as social terror and violence on a daily basis.”

Joining Pitts on numerous occasions in targeting India was especially ill-considered, the Foundation asserted. Pitts was exposed several years ago as the single largest recipient of financial gifts from Ghulam Nabi Fai. Fai, as was widely reported, came under the scrutiny of the FBI, and was ultimately charged and convicted for concealing a transfer of $3.5M from the Pakistani Inter-Services Intelligence (ISI) agency to enable him to illegally lobby the US Congress in support of the ISI’s proxy war against India in Kashmir.

In April of 2014, just a week before elections were held in India, Ellison and Pitts hosted a Congressional hearing critical of India. The hearing was panned, as it appeared as if some within Congress were attempting, for a second time, to influence elections in the world’s largest democracy. HAF submitted an extensive statement of the record and expressed serious concern with the selection of a biased panel of four witnesses, all of whom were well known for their political activism, and some with a record of espousing Hinduphobic policies.

The timing of the hearing, and its anti-Hindu and anti-India views, prompted others, including Reps. Tulsi Gabbard (D-HI) and Brad Sherman (D-CA), to state for the record their serious concerns about the appropriateness of the hearing.

Undeterred, Ellison earned a rebuke earlier this year from the Indian government, and many Indian Americans, after he again joined Pitts in alleging that attacks against Indian minorities were increasing. India’s external affairs ministry (counterpart to the US State Department) reacted in a rare public statement calling the letter inaccurate on facts and “unfortunate.”

The Foundation notes that, in spite of his interest in India, Ellison failed to join dozens of his colleagues in signing on to a Congressional resolution urging the creation of a stamp celebrating the Hindu, Jain and Sikh festival of Diwali. A Diwali stamp was released by USPS this past October.

“Surveys confirm that nearly 65 percent of Indian Americans are registered or lean Democrat, so leadership of the DNC is a matter of great importance in further engaging the community,” added Suhag Shukla, HAF’s Executive Director. “Mr. Ellison’s record on India over the last decade raises many concerns, but we believe that beginning a constructive dialogue between the Indian and Hindu American communities and Mr. Ellison are important first steps in realizing unity and inclusivity urgently needed today.”