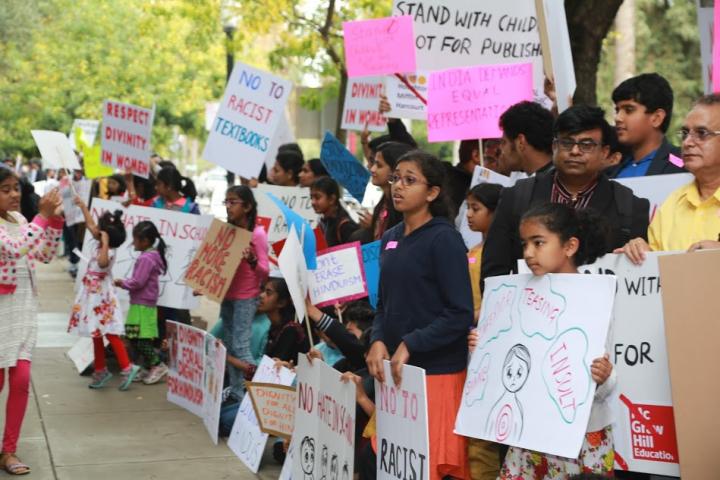 A JOINT STATEMENT FROM THE HINDU AMERICAN COMMUNITY

Sacramento, CA (November 10, 2017) — After more than a decade of constructive civic engagement with the California Department of Education, the Hindu American community won a significant victory yesterday in its quest for an accurate, equitable, and culturally competent portrayal of Hinduism and India in California textbooks.

In its final public hearing, the Department’s State Board of Education (SBE) voted unanimously to reject two deeply problematic textbook programs from Houghton Mifflin Harcourt (Grades K-6 and Grades 6-8) for adversely reflecting on Hinduism and other diverse communities. The board also voted unanimously to approve positive edits submitted by Hindu American community groups to improve the portrayal of Hinduism and India in many other textbooks.

“This is truly historic. After many years of civic engagement, Hindu-Americans have started to make themselves heard,” said Shantharam Nekkar of Hindu Education Foundation USA, an organization dedicated to enriching the understanding of Indian civilization and Hinduism in America. “While many books have improved, others still remain deeply flawed. We will continue to engage constructively and fight biases and prejudices against Hinduism and India.”

The SBE’s decision came after hearing testimonies and receiving letters from thousands of Hindu American parents, children, educators and community members from across California, including immigrant Hindus from Fiji, Caribbean and India, as well as letters from a broad coalition of more than 75 interfaith and community groups, 17 state and federal elected officials, and 38 leading academics.

Throughout the day, several public officials across the country also sent social media messages of support, applauding the community’s efforts in ensuring that Hinduism is presented accurately in California textbooks.

The Board rebuffed last minute attempts to disrupt the process by a group calling itself South Asian Histories for All, which made vitriolic, bigoted, and Hinduphobic statements about Hinduism in public testimony and on social media, and threatened to sue the SBE.

“Despite the false claims of SAHFA, our broad interfaith coalition that represents individuals from all communities including Dalits, never tried to erase any community, caste, or religion’s history, and believe that all groups should be represented fairly in textbooks,” said Samir Kalra, Esq., Senior Director at the Hindu American Foundation, a nonprofit advocacy group for the Hindu American community. “In fact, we asked that the contributions of Hindus of all backgrounds, including the spiritual traditions of Dalit Hindus, be acknowledged in textbooks. Most of the changes that SAHFA submitted were hateful and violate California law and the textbook framework.”

“We are grateful for the testimonies from NAACP representatives and the Hispanic Chamber, along with strong letters of support from over 17 public officials. Together, we rallied over 1000 people to rally in this amazing showing of civic engagement and empowerment. Our voices were heard!”

CC Yin, Founder and Chairman of APAPA, added, “When we work together, we will win.”

UPDATE: The HAF legal team has written to the CDE urging them to investigate assault allegations made by members of SAHFA, and should they turn out to be baseless, to have the testimony of individuals making these allegations stricken from the record.