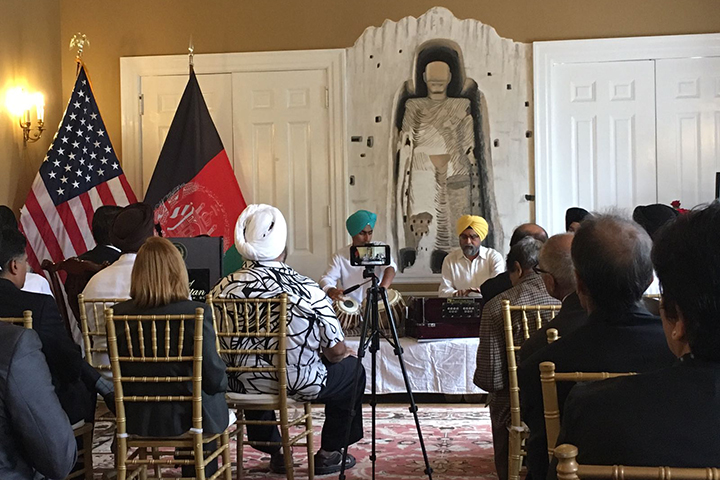 On Sunday, July 15th, Ambassador Hamdullah Mohib, PhD hosted a memorial service at the Washington, DC Embassy of Afghanistan to commemorate the Sikh and Hindu victims of the July 1 terrorist attack in Jalalabad.

Responsibility for the attack, intended to drive the remaining small population of Hindus and Sikhs from the country, has been claimed by the Islamic State in Afghanistan.

Opening the program, Ambassador Mohib said, “This occasion is one that brings us together to recognize a community that has deep roots in Afghanistan. For many, they often think of the minority Hindus and Sikhs as migrants from India. But in reality, the Hindus and Sikhs of Afghanistan are the original residents of this country.”

Sena Lund, President of the New York-based Afghan Hindu Association, recited the names of the 18 slain Sikh and Hindu leaders.

Asha Kapoor of the local Asamai Hindu Mandir recited a speech in Dari, the official language of Afghanistan to commemorate the victims.

Sounds of sacred traditional Sikh hymns, sung by leaders of the local Washington gurdwara and National Sikh Campaign, as well as verses from the Bhagavad Gita, recited by Pandit Ram Kumar Shastri of Silver Spring, Maryland’s Asamai Mandir, filled the air. A packed hall of mourners from the Hindu and Sikh communities sat alongside officials from the Afghan Embassy, Indian Embassy, and US State Department facing a mural depicting the ancient relics of the Buddhas of Bamiyan.

Jay Kansara, HAF Director of Government Relations, addressed the assembly asking those afflicted by the tragedy to not lose hope. Hindus and Afghans have more than 5000 years of history binding our civilizations and a shared destiny in democracy, Kansara told the audience.

“We at the Hindu American Foundation pledge to be with you every step of the way as Hindu and Sikhs seek full enfranchisement in Afghan society,” Kansara concluded.

Mr. Puneet Kundal, Deputy Chief of Mission of the Embassy of India, conveyed condolences from the Government of India:

Congresswoman Tulsi Gabbard (D-HI), senior Democrat on the House Foreign Affairs and Armed Services committees, as well as the first Hindu in the US Congress, also conveyed condolences, read by a representative of her office:

“This brutal attack is yet another example of the fear, bigotry and hatred that sadly exists in our world. During the Taliban regime, Hindus and Sikhs were forced to wear yellow patches to identify themselves in public, furthering extreme prejudice, and eventually forcing many to seek asylum in India. These fear tactics and attacks attempt to divide us, but we cannot give into this hate. We must confront hatred with love, fear with understanding, and darkness with light. We must continue to stand up to bigotry and hatred in Afghanistan, here at home, and around the world.”

A letter from the Ambassador-at-Large for International Religious Freedom Sam Brownback was read by a senior official from his office at the US State Department:

“The loss of these community leaders was a terrible blow, not only to Afghanistan, but also to the international community. The Sikh and Hindu communities have a long and distinguished heritage, and this horrific attack will not diminish that. Our office will continue to monitor the conditions faced by religious minorities in Afghanistan. I stand with you and will work toward an Afghanistan that is peaceful and secure for all its people.”

Closing the event, Mr. Joginder Kapoor, former president of the Afghan Hindu Association, emotionally made a direct call to action:

“What the future holds for us, a miniscule minority, does not look bright as long as foreign insurgents are in Afghanistan. They must be eradicated. These radical Islamic terrorist groups must be wiped out from the face of the earth. We pray that peace and tranquility return to this once a peaceful nation so our children, and our children’s children, who live outside Afghanistan can one day be able to visit the land of their forefathers without any fear and prejudice.”

The event was organized by the Afghan Hindu Association, in conjunction with the Embassy of Afghanistan, with the assistance of the Hindu American Foundation (HAF).

Quotes have been slightly edited for clarity