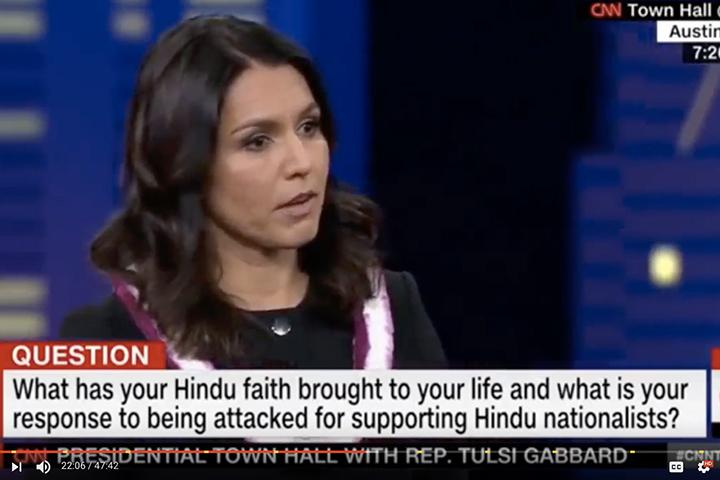 Washington, DC (March 13, 2019) — Last weekend’s CNN Town Hall with Tulsi Gabbard — the first Hindu American to be elected to US Congress and to run for President — brought Hindus and Hinduism to the American public in a bold and historic way. Asked about her religion and spiritual beliefs, Gabbard highlighted the inspiration her Hindu faith has brought her several times, as well as the Hinduphobia she’s faced in her time in office.

“For many Americans, Gabbard’s town hall may have been their first exposure to Hindu philosophy and practice. Also, it was likely the first time many of them were made aware of the bias and bigotry that the 3+ million Hindu American community sometimes faces,” remarked HAF Executive Director Suhag Shukla.

“Hinduphobia” and “anti-Hindu hate” are used interchangeably, and the FBI reported this year that Hindus were the victims of the largest number of hate crimes after adherents of Abrahamic religions.

“From a growing number of temple desecrations to bullying and even murder, Hindus have seen violent attacks against their community increase substantially,” Shukla said. “Hinduphobia is also seen in less overt ways, such as when anti-Hindu activists insist that public school children should be taught that ‘Hinduism is an evil construct’ or when an American media outlet publishes a piece that profiles and targets donors to Gabbard’s campaign with ‘Hindu sounding names’ and insinuates dual loyalty to India over the US.”