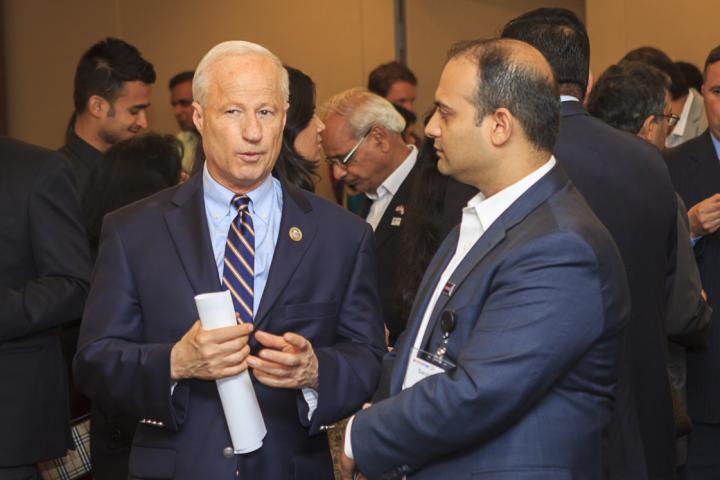 Washington, DC (June 22, 2017) — With a delegation of over 60, the Hindu American Foundation hosted its second annual Advocacy Forum in Washington, DC, complete with a full day long policy conference, an evening reception, as well as an advocacy on the Hill day consisting of meetings with elected officials.

Monday, June 19, brought together leading members of government and civil society to discuss the protection of civil rights, ways to combat the rise of hate crimes in the US, and the spread of terrorism and violent extremism across South Asia.

“In 2015 the number of anti-religious hate crimes was the largest percentage of hate crimes in the 25 year history of the Hate Crimes Statistics Act,” Michael Lieberman told the audience. “This year was the first year ever that the FBI collected anti-Hindu hate crimes. The reason they did this was because of your advocacy.”

On how to prevent extremist terrorism at the broadest level, Seth Oldmixon concluded, “We [in the United States] have to be a city on the hill. We have to be a shining example of demonstrating that religious freedom and tolerance and inclusivity work. That is the biggest threat to these extremist groups.”

During HAF’s annual DC advocacy day, on June 20th, delegates met with 50 members of Congress to discuss community concerns about rising hate crimes, the spread of terrorism, and the lack of transparency and accountability at the US Commission on International Religious Freedom. The delegation also addressed the need to generate greater awareness of heart health among South Asian Americans.

The Advocacy Forum concluded with HAF’s Capitol Hill Reception, which garnered more than 200 attendees—including members of Congress such as Raja Krishnamoorthi (D-IL), Michael Coffman (R-CO), Eric Swalwell (D-CA), Pete Olson (R-TX), Judy Chu (D-CA), Sheila Jackson Lee (D-TX), and Darren Soto (D-FL)—to recognize the advocacy work done in the past year by or on the behalf of the Hindu American community. In addition, Charles Haynes, founder of the Religious Freedom Center and a vice-president at the Newseum Institute, was honored with the Mahatma Gandhi Award for the Advancement of Religious Pluralism.

Upon receiving the award, Haynes said that HAF was “a much-needed voice for a growing and significant part of the American mosaic, [and] by working to protect the religious liberty of all—not just Hindus— HAF is helping to create a level playing field in America for people of all religious and worldviews, the only way forward for building on nation of many cultures and faiths.”