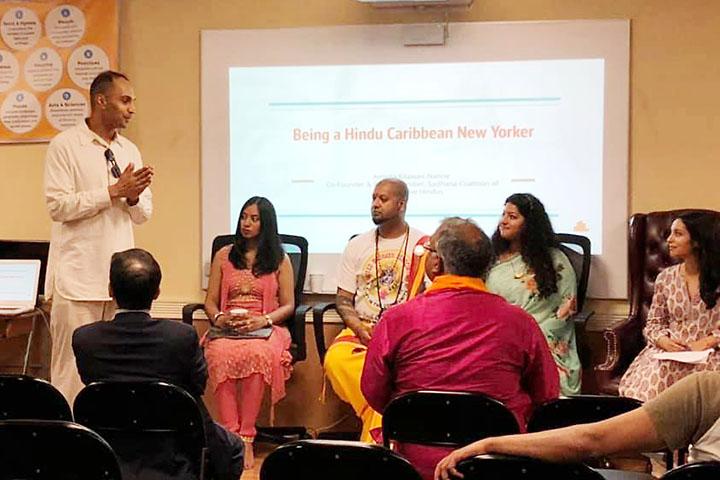 Washington, DC (June 5, 2019) — Lanham, Maryland’s Sri Siva Vishnu Temple Center for Dharma Education and Education Committee hosted a town hall Saturday, June 1, on the importance of the Caribbean Hindu community in advancing Hinduism in the Diaspora, as well as some of the challenges many Diasporic Hindus face in the United States.

Speakers highlighted key themes in the Caribbean Hindu experience, including the legacy of indentured servitude and slavery from the 19th century; the coerced conversions to Christianity in the West Indies; feelings of exclusion from many East Indians/South Asians; and the importance of Bhakti in carrying on traditions passed down for generations.

Jhingoor noted her own practice of Hinduism continued in the tradition of Hinduism as an indigenous religion of resistance, and how she uses Hinduism – specifically Madrassi practices – to address issues of gender justice and marginalization.

Kilawan-Narine said that unlike many Indian American Hindus, most Caribbean Hindus were proud of their faith, and did not see a conflict between their religious identity and their engagement with social justice spaces. Ramjattan echoed those comments, adding that the Hindu community needed to put aside territorialism over geography, caste, sects, etc., and emphasize “unity in the community,” the United Madrassi Association’s motto.

All of the speakers agreed that more needs to be done to integrate the experiences of Diasporic Hindus into the larger narrative of Hinduism. Indira Kumar, co-founder of the India International School in Fairfax, Va., and a native of Guyana, and Pandit Vik Persaud of the Maryland Milan Mandir in Silver Spring, Md., added the importance of the community asserting itself as leaders in preserving and rejuvenating Hinduism.

Riyad Insally, the Guyanese Ambassador to the United States, also attended the town hall and praised the gathering as a step in recognizing the important contributions of religion in the daily lives of Caribbean Hindus. SSVT co-founder Dr. Siva Subramanian presented Ambassador Insally with a gift from the temple and announced that the SSVT would be more proactive in integrating Caribbean Hindus into its spaces.

SSVT Education co-chair Vijay Kumar also announced that $300,000 in resources on Hinduism, as well as continuing education courses, would be made available for free to all those interested, and encouraged Diasporic Hindus to engage with the resources. The SSVT Board members present also noted they would work to build long-term relationships with the Indo-Caribbean community in the DC area and across the country.

For more information visit www.ssvt.org. To watch videos of the event, click here.