5 things to know about dharma
Things To Know

5 things to know about dharma 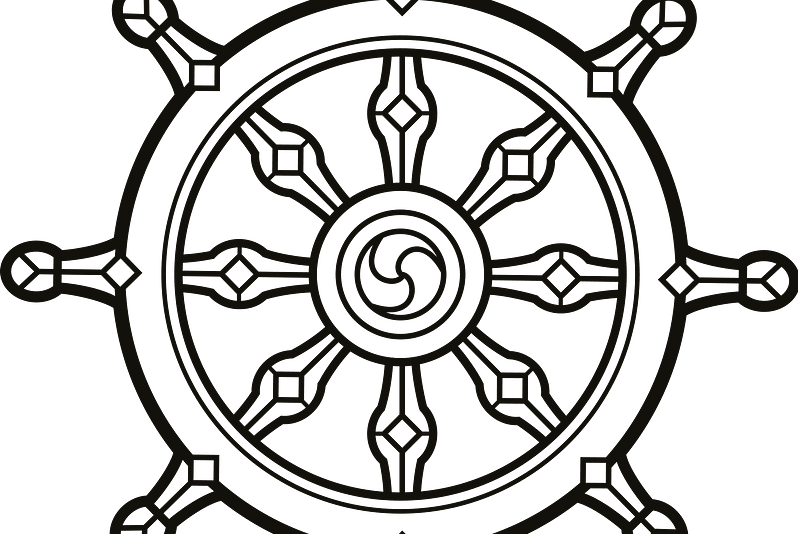 1) Dharma has no single-word English translation

From the Sanskrit root dhri (which means “to support,” “to hold,” or “to maintain”), dharma is described in early Vedic texts as laws that bring order to a universe that would otherwise be in chaos.

Sacred texts and stories further espouse dharma as actions most conducive to maintaining family and society, both of which would also otherwise fall into chaos. It should therefore come as no surprise that the attempted one-word English translations of dharma provided by scholars are numerous, including words like “law,” “duty,” “custom,” and “model,” all of which ultimately serve in preserving or holding together the structure of an organized system.

Of course, laws, duties, and customs shift and change from person to person, culture to culture, place to place, and time period to time period, making it difficult to ascertain when someone is actually acting in accord with dharma and when someone is not.

Because all people are unique with different inclinations and responsibilities, determining the “right” or “proper” actions a person should perform from moment to moment is not so cut and dried.

2) Dharma is one of the four goals of life

According to the Vedas, the path to a balanced and meaningful existence generally requires the holistic pursuit of right actions (dharma), material security (artha), material happiness (kama), and spiritual liberation (moksha). Although the first three are meant to harmoniously interact to create a fabric of support for the pursuit of liberation, they can also be viewed more linearly. As proper actions help one to attain wealth, that wealth then allows access to material comforts. When people are materially content, they can more easily cultivate the peace of mind required to focus on pursuing their spiritual practices and growth.

Thus, dharma is a core foundation from which all other goals are achieved, inherently suggesting there’s a right way for all people to live in order to best serve themselves and others around them. As a result, dharma is often referred to as the law of righteousness, providing guidelines of ethics, behaviors, and traditions meant to help people fulfill the best versions of themselves.

3) But what makes something dharmic?

If dharma has no single meaning that stands unchanged despite context, how can you know when an action is truly dharmic? What is the method by which people can fulfill the best versions of themselves?

The answer to these questions lie in understanding the nature of a thing. Nature is inherent in the structure of a particular object, manifested as essential and irreplaceable traits or qualities. These qualities give an object its purpose, which can be described as that object’s dharma. The nature of fire, for example, is to burn, as well as give off heat and light. Hence, the dharma of fire is to provide heat, light, and the ability to burn.

The dharma of living beings can be divided into two categories: spiritual and material.

While everyone is inherently spiritual and thus eternal by nature, everyone is also encased in temporary material bodies which manifest their own physical and psychological natures. We become the best versions of ourselves when we embrace and cultivate our natural positive inclinations and use them to uplift ourselves and others, contributing to an environment in which all can freely pursue their spiritual goals. This entails thoughts, words, and actions that exhibit compassion, truthfulness, self-restraint, generosity, patience, contentment, empathy, among numerous other values illustrated through sacred texts and stories. Such a process provides guidance, while at the same time allowing people the freedom to pursue spirituality in a way that aligns with their personalities and inclinations.

Dharma can therefore be ultimately characterized as the mode of conduct most conducive for spiritual growth.

As dharma is the mode of conduct most conducive for spiritual growth, the guidelines of ethics and principles, like “patience” or “truthfulness,” are considered dharmic only to the point they support spiritually uplifting endeavors.

If such principles ever somehow get in the way of such endeavors, they can actually become adharmic, or negative actions.

A good example of a traditionally dharmic principle being used adharmically can be found in India’s epic, the Mahabharata, in which Krishna tells Arjuna a story about a saint who vowed to never lie.

One day a group of innocent people came by the man’s ashram looking to hide from a gang of bandits that were chasing them. Shortly after concealing themselves, however, the bandits arrived and asked the saint as to the whereabouts of the innocent group. Wanting to keep his vow, he pointed to where the group was hidden, after which the bandits killed them and stole all of their belongings.

The moral of the story, as Krishna points out, is that ethical guidelines should not be followed blindly. The subtleties of dharma are often difficult to understand, and therefore require one to be reflective and practice careful discernment when applying the principles of religion.

5) There are different types of dharma

If spiritual growth is the ultimate aim of life, then it is the duty of every person striving to act in dharma to help create peaceful and functioning communities that support an individual’s pursuit of spiritual life. Strong communities stand on the pillars of strong families, and strong families are led by high-character individuals who have become the best versions of themselves by using their natural abilities to serve others.

Imagine a man who’s a doctor. He also happens to be a husband, a son, and a father. He loyally performs the unique duties of each role, doing things like helping his kids with their homework, balancing the checkbook with his wife, bringing his parents to doctor appointments, and running to the hospital when his job calls for it. Depending on the situation, sometimes one duty takes precedence over the other or even conflicts — like if he and his wife stay home to take care of a sick child instead of visiting his parents, a choice done to meet a greater need and greater good.

Unlike basic objects or elements, which have purposes that are generally very easily defined, humans are complex beings who usually find themselves having to fulfill a medley of roles in relation to spirituality, community, family, and the self. As complicated as this might seem at times, it’s important to always remember that creating a peaceful world in which all can easily pursue spirituality begins with one’s own spiritual practice. Connecting to the Divine helps give one the instincts to perform actions that are inherently dharmic.

In other words, regular spiritual disciplines help all other aspects of life to naturally fall into place.