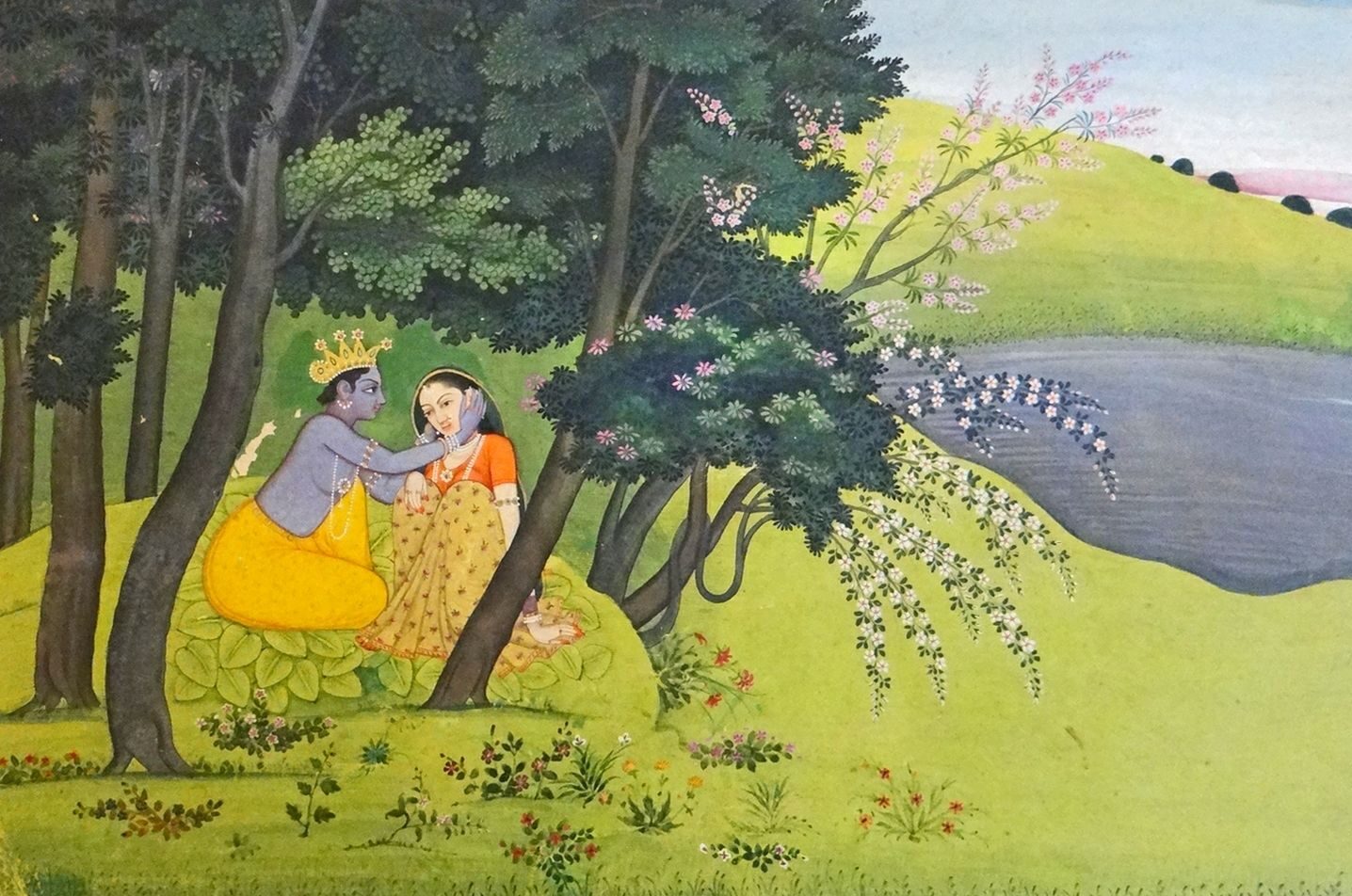 1) She is Krishna’s eternal consort

In the Hindu tradition of Gaudiya Vaishnava theology, Krishna is worshiped as the highest manifestation of the Divine — the absolute spiritual source from which everything originates. To say he is God, and simply leave it at that, however, would be wholly insufficient.

According to the Vedas, a complete conception of the Divine includes both masculine and feminine aspects. Krishna as the highest manifestation of reality is therefore considered incomplete without his feminine counterpart, Radharani.

Described as the energetic and creative power of the Divine, Radharani is, in one sense, one with Krishna, as the sunshine is one with the sun. Just as the sun cannot exist without sunshine and vice versa, Radha and Krishna too have no meaning without each other.

In a tradition where cultivating bhakti, or devotion to the Supreme, is the primary goal, Radha and Krishna are the Divine couple, whose love for each other is seen as the full expression of spiritual reality.

2) She is the one who worships Krishna best

As the espoused source of creation, Krishna expands from himself innumerable living beings with whom he can enjoy various and unique forms of loving relationships

Of all such beings, the devotees who display the greatest love for Krishna are said to exist with him in an eternal spiritual realm known as the village of Vrindavan. Of everyone who exists in Vrindavan, the gopis, or Krishna’s childhood sweethearts, are his most surrendered devotees, and of the gopis, Radharani is foremost.

Being the manifestation of Krishna’s creative and energetic power, she embodies the totality of love for Krishna, and lives only to bring him happiness. Feeling that her love can always attain greater heights, she is actually the source of all the other gopis, as she expands to better fulfill Krishna’s desire for a variety of loving relationships.

Known, therefore, as the one who worships Krishna best, Radharani further strives to fulfill Krishna’s desires by guiding and nurturing everyone in their relationship with him.

Like a mother who experiences immense satisfaction by seeing her wayward children reconnect with their father, Radharani is the personification of bhakti, as she is always thinking of ways to increase Krishna’s happiness by facilitating his relationship with all other beings.

As such, devotional service in Gaudiya Vaishnavism means to follow in the footsteps of Radharani, who helps everyone achieve perfection in their love for Krishna.

3) She is known as the controller of Krishna

In some respects, it may seem that Krishna is an egocentric god who created other beings for the sole purpose of worshiping him as he reigns supreme.

On the contrary, it’s explained in Gaudiya Vaishnava texts that those who develop love for Krishna actually reign supreme over him. Indeed, as the espoused origin of creation, Krishna is fully independent and the controller of everything. But like a good father who would give up anything and everything for his loving children, Krishna too, is subdued by his devotees’ to the degree and way in which they express their love for him.

As the symbol of devotional service in the highest degree, Radharani fully controls Krishna with her love, which is considered particularly unique and powerful, specifically because of her mood of devotion.

According to the Bhagavat Purana, Krishna displayed his Vrindavan pastimes on earth about 5,000 years ago. After he grew up and had to leave for the city where he took on the responsibilities of a king, everyone in the village fell into a state of immense separation.

Their longing to see Krishna again caused them unparalleled pain, but it was through this pain that they could experience an intensity of sincere love that could not have otherwise been tapped into. Radharani’s longing for Krishna was so profound, that it bewildered even Krishna, who felt incapable of matching such love, and so considered himself eternally in her debt.

Because the primary focus of Gaudiya Vaishnavism is to develop love and devotion, followers, in a way, consider Radharani as the tradition’s most important figure, for the love she experiences surpasses even that of Krishna’s.

4) She is the Hare in Hare Krishna

The most powerful process by which a person can connect to Krishna, according to Gaudiya Vaishnava texts, is to sincerely call out to him through the chanting of the Hare Krishna mantra. Because there is no meaning to Krishna without Radha, the mantra is actually a prayer to Radha first, beseeching her as Hare, or Krishna’s most loving and compassionate counterpart, to engage the chanter in his service.

Her love and compassion is considered so extraordinary, in fact, that Krishna, wanting to understand and experience it for himself, incarnated in a form that embodied her disposition.

Gaudiya Vaishnavas believe Caitanya Mahaprabhu, a 16th-century saint from West Bengal, was indeed this combined form of Radha and Krishna, who taught devotional service through his personal example.

Immersed in Radharani’s intense mood of love in separation, Mahaprabhu had immense sensitivity for all who are disconnected from Krishna. He, therefore, promoted the chanting of the Hare Krishna mantra as a powerful means through which one can rekindle his or her relationship with Krishna by crying out to him in deep earnestness. Going further, he elucidated that such chanting is even more potent when done congregationally in the form of singing and music, a practice known as kirtan. Just as a father is particularly moved by the sight of his children working together to please him, Krishna too is especially stirred when his devotees support each other in a unified effort to connect to him.

As Caitanya Mahaprabhu, Radharani thus sets the example for devotees, calling for them to re-awaken their love for Krishna.

5) Her birth is celebrated on Radhashtami

Once during the Hindu lunar month of Bhadra (which falls over August and September in the Western calendar), a king named Vrishabhanu went to take a bath in the Yamuna, when he noticed a golden effulgence emanating from a lotus flower floating on the water. As he waded into the river and approached the flower, he discovered a beautiful baby girl lying within the lotus petals. Entranced by the child, the king brought the baby to his wife for them to raise. Soon after bringing her home, however, they discovered that she wouldn’t open her eyes, and thus feared she might be blind for life.

One day, the great Sage Narada came to visit Vrishabhanu and asked how he and his family were doing. Believing that Narada could perhaps perform a miracle, Vrishabhanu told him about the baby, and then swiftly placed her on his lap. Upon holding the child, Narada became inundated by a feeling of unfathomable love and happiness. Overwhelmed, the hairs on his body stood on end and tears began to flow from his eyes, as the baby revealed to Narada her identity as Radharani. After the revelation, Narada composed himself and handed the baby back to Vrishabhanu, who looked at him anxiously. Seeing his apprehension, Narada told the king not to worry, and that soon all would become perfect.

Shortly after Narada’s visit, Vrishabhanu arranged a festival, the attendees of which included King Nanda, his wife Yashoda, and their one-year-old son Krishna. At some point during the festival, Krishna crawled up to the cradle in Radha’s room, pulled himself up, and looked inside. Sensing that Krishna was near her, Radharani, for the first time, opened her eyes, and looked upon her beloved, revealing that she had no interest in any other sight the world had to offer.

Attempting to follow in Radharani’s footsteps, devotees celebrate her birth by praying for her compassion and guidance. Fasting, chanting, and singing devotional songs in praise of the divine couple, the entire day is spent meditating on Radha’s unfathomable love for Krishna. For by sincere devotional practice, a person can perhaps one day glimpse a window into such love.