8 Things You May Want to Know About Gurus ﻿ 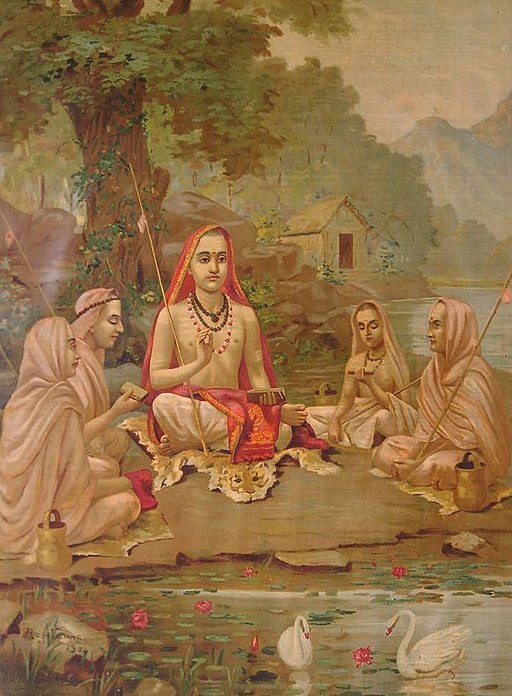 What does the word ‘guru’ mean?

The literal translation of guru is someone who is a “dispeller of darkness.” The darkness here is ignorance.

Though any master teacher is sometimes referred to as a guru (nowadays the word guru is used in English very loosely), traditionally guru refers to a religious or spiritual teacher who not only has deep knowledge that can lead to moksha (liberation or enlightenment), but also has direct experience of Divine vision or grace, which has been assimilated into their way of being.

Though far less common today than it once was, traditionally students lived with their guru, at least for some time, with the guru essentially taking on the role of a parent.

Though in the West guru are most associated by the general public with Hinduism, the term is used for spiritual teachers in the Buddhist, Jain, and Sikh traditions as well.

Do all Hindus have a guru?

No. There is no requirement to have a guru, though most Hindu traditions hold that having a guru is immensely beneficial for one’s spiritual knowledge and advancement.

In other words, while you do not have to have a guru to reach enlightenment, it’s easier with a guru.

This is not dissimilar to any new journey. Having someone alongside you who has already made the trip or at least knows well the way is easiest. Absent their presence, following their written directions also makes the trip easier. You can also explore on your own, and reach the destination, but it’s not as easy.  Progress will probably be slower, and the risk of heading off in a wrong direction is higher.

What’s the role of a guru?

A guru guides the spiritual progress of their students (known as shishya). Through the guru’s spiritual, psychological, and practical insight, instructions are tailored according to what they see is required for the student to learn and advance spiritually.

Up until the latter part of the 20th century, all or at least the majority of teaching was done in an oral tradition, a direct transmission between teacher and student. Students often lived with or nearby their guru, or visited regularly. Now, while the oral tradition is still highly valued, most guru also have written extensive discourses on their teachings. Many also give live or recorded online lectures to students around the world, have formal students on every continent, and their teachings may well impact the lives of countless spiritual seekers who never intend to undertake extended study or meet the guru in person.

Do guru have to be male?

No. There is absolutely no scriptural nor cultural mandate for a guru to be male — though this might be what comes to mind when someone thinks of the word guru. In fact, throughout history and today there have been plenty of prominent female guru. Sri Sarada Devi, Sister Nivedita, the Mother, Anandamayi Ma, Mata Amritanandamayi, Gurumayi, and Amma Sri Karunamayi are just some of the more prominent ones in the past half century.

How does someone become a guru?

Hinduism as a religion may not have a single leader, but each individual teaching tradition that makes up Hinduism places great importance on lineage of teachers. This is referred to as guru-shishya parampara.

Most guru today were once themselves the shishya of another guru in the same lineage. However, a guru may arise who, through their own past sadhana (discipline and study), is widely recognized as an enlightened spiritual master, but this is rare.

In general, only when a recognized guru gives permission for one of their shishya to carry on the tradition as a guru, can that student rightfully use that title. Sometimes, advanced students of a guru will also begin teaching on their own, without claiming to be a full-fledged guru. This is something you often see in the study of yoga.

Lineage is especially important to emphasize today, for people looking to undertake deeper spiritual study under a guru. Has the teacher you are looking to study with been authorized in some capacity to teach by their teacher? Who have they studied under and learned from?

When looking for a guru or spiritual teacher, treat it not entirely unlike applying to a university. Before you even ask the university to accept you for study, you will want to learn the university’s educational philosophy, its history, how its students like studying there, and what its students have gone on to do. While, as a prospective student you may not be in a position to judge the spiritual attainment of a potential guru (just as you may not as a freshman grasp the complexity of the work of any professor), you nevertheless should try to assess the history and qualifications of any prospective guru.

Can you switch guru?

Yes. It is perfectly acceptable, if not commonplace considering the seriousness of the relationship, for someone to switch guru. This can be because your own spiritual needs have changed, your previous guru dies, perhaps because your guru has themselves changed in their teachings and methods, or recommends that your path is better off with someone else.

Contrary to what you might think, this is not a modern phenomena. Spiritual texts such as the Srimad Bhagavatam mention some individuals having multiple guru, as their spiritual quest progresses.

Why do people prostrate themselves to a guru?

In Hindu culture, prostrating yourself before someone is a sign of deep respect. You will see devotees do this before a guru and in temples before murti (images of the divine, used to focus devotional attention). This is done, in both cases, not because the devotee literally believes they are bowing down to God, but rather because of their devotion to the Divine principle embodied or manifested before them. You will also often see people touching the feet of their parents and other people whom they respect and imbue with authority and devotion.

The feet are the focus in both cases, as the book What is Hinduism? explains, because, “According to tradition the totality of the [guru] is contained within his feet. All nerve current terminate there. The vital points of every organ of the body…are there. Touch the feet and we touch the spiritual master.” In more basic terms, the feet are the foundation of the guru’s physical being. Touching them shows respect for the totality of that person.

How should a student behave with their guru?

Hindu spiritual texts are often quite strict in their description of how students should behave towards their guru (strict obedience, not questioning their instructions, giving over personal belongings, etc). But just as society as a whole has trended towards more egalitarian and less hierarchical attitudes in the past 50 years, so too have expectations around the behavior of students to a guru.

Respect, deference, and devotion is still fully the expectation, but the complete submission that traditional texts mention is usually not the norm anymore. With this in mind, students are still expected to be loyal to their guru and place trust in his/her knowledge and methods — without going so far as to place blind faith in the guru. Students are expected to be humble in front of their guru, and when sharing teachings with others, make sure to credit the guru.

There is also a growing recognition that while a guru has deep spiritual knowledge to impart — they continue to have an integral and positive role to play in Hindu traditions — that doesn’t mean they are entirely immune to the normal human responses to everyday situations. Guru may be special, but they are also still human. There’s also greater public acknowledgement that a guru can stray from the spiritual ideals they espouse and act in unethical or even abusive ways towards their students. Such behavior is increasingly and rightfully condemned when it occurs.