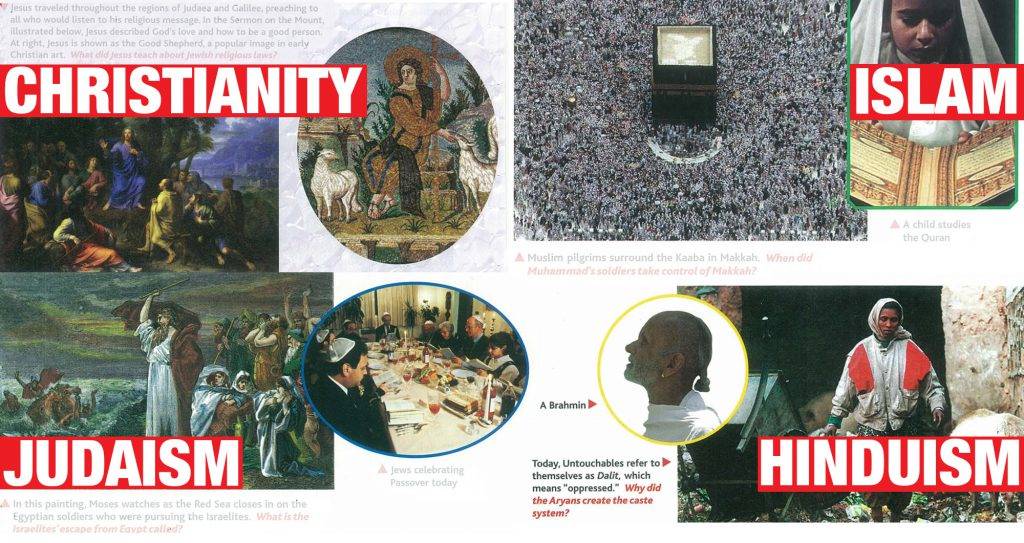 What if sixth and seventh graders take a history class were told that the defining characteristic of Christianity was the Inquisition, or supporting slavery of Africans? What if their textbooks told them that ISIS alone represented Islam and Islamic culture? What if Buddhism was defined for these 11- and 12-year olds as a faith that has subjugated minorities in places like Bhutan, Sri Lanka, and Burma?

If this was how these traditions were represented, with their oppressive elements placed as the overriding trait, there would outrage among parents. They’d point out that though there are undoubtedly negative aspects of each faith, it’s unfair to lead the presentation of each with them to middle schoolers, as the majority of followers don’t support such beliefs and actions, or that such beliefs no longer form a majority belief within the religion, with leading spiritual teachers condemning them. Doing so results in an inaccurate portrayal of how each religion is practiced on a day to day basis by the majority of adherents today.

As point of fact, this is not how Christianity, Islam, and Judaism are presented. Rather, the positive aspects both socially and spiritually are presented first, with any mention of negative social aspects presented as exceptions to what are otherwise benevolent expressions of the universal human desire to understand our place in the cosmos.

Now consider that in the standards forming the basis for California’s textbooks, Hinduism is presented as a religion that is based on caste oppression and subjugation of women, with its roots found in an invasion by outsiders who imposed such a system on the native inhabitants of the Indian subcontinent.

While there is mention of the spiritual aspects of Hinduism—the unity of existence, the concepts of dharma, karma, and moksha, that there are multiple paths to the divine, for example—these are downplayed in comparison to the centrality and currency of caste discrimination as spiritual belief. And, all of this despite:

What would an equitable treatment of Hinduism look like?

The core spiritual teachings and practices would be presented first, noting that though there has been change in practice and emphasis over the centuries, and the written versions of the core texts are contemporaneous with the origins of Judaism, aspects of the tradition we call Hinduism today date back into prehistory. The pluralism inherent in Hinduism would be emphasized, that there are multiple sects and communities with different practices and beliefs but despite any differences there are more commonalities that unite them. That Hinduism spread out from its origins in the Indian subcontinent and became established early in what is now Cambodia, Indonesia, and Vietnam through trading would be included. Also included would be the fact that today Hinduism is the third largest faith, with Hindus in nearly every country on the planet, and that India, where the majority of Hindus still live, is the world’s largest democracy.

Caste discrimination would have to be mentioned, of course, but it would be done with nuance, noting the difference between varna and jati, that it wasn’t until the first couple centuries CE that the system became largely birth-based and inflexible, that some of Hinduism greatest saints and sages came from low caste backgrounds, that today though caste discrimination is widely condemned by spiritual teachers and officially illegal in India discrimination does sadly still exist. It would also be noted that while sometimes ancient texts are cited as basis for discrimination, the core teachings of Hinduism give no sanction to this discrimination—also, that this sort of discrimination occurs in every religious tradition in South Asia today, showing the social nature of the problem.

What you can do about this

The Hindu American Foundation has been working for the past several years to ensure that Hinduism is presented in an accurate and equitable manner in US textbooks. For the past several months we have been focusing on California K-12 History-Social Science Frameworks. We have made some significant strides in ensuring that Hinduism receives the comparatively same emphasis and treatment as all other faith traditions. However, there remains the possibility that in the final hearing with the state Board of Education in the second week of July that some of our gains could be erased.

Please help us in saying to the Board strongly and clearly that Hinduism deserves the same treatment in how it is presented as is given to Christianity, Islam, Judaism, Buddhism, and Sikhism.

Please sign the Equity in Education 2016 Petition today. If you’ve already signed it, please forward it to your friends, family, and anyone else who you think might be interested.