Ending casteism doesn’t require eradicating Hinduism. To suggest otherwise is itself bigotry.
On The Issues 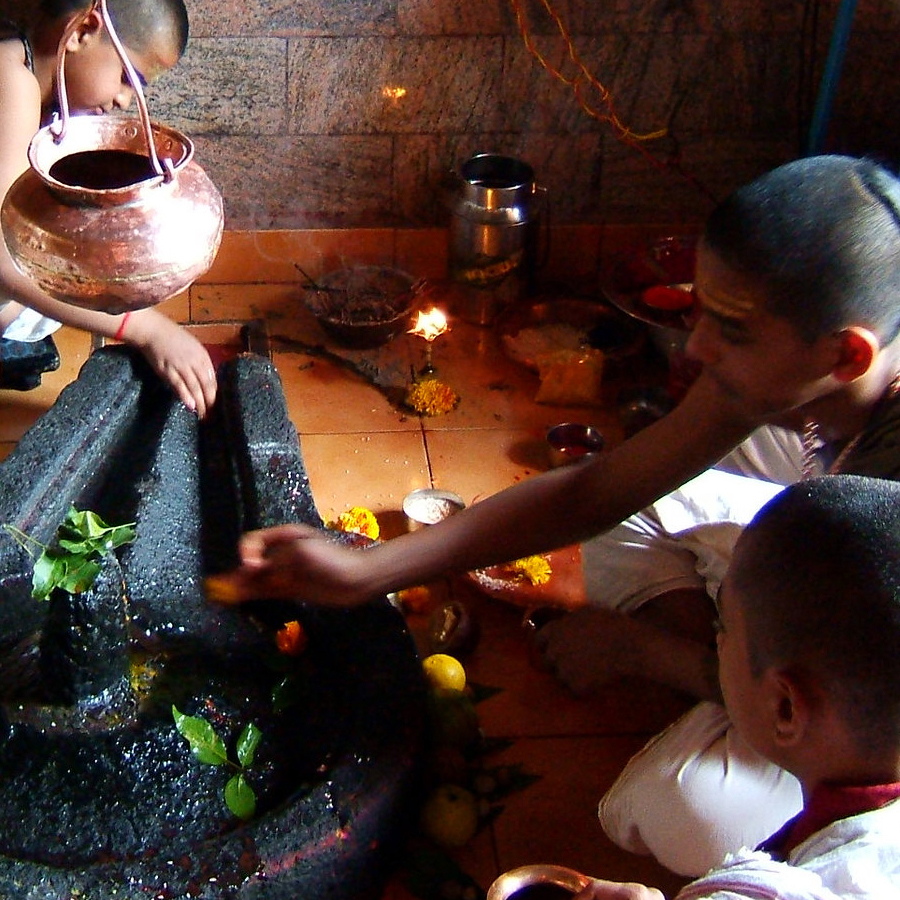 Marwaris are part of a small ethno-linguistic community which traces its roots to the Marwar region of the state of Rajasthan.

I never know what I’m supposed to say at the temple if a priest asks for my gotra (lineage), but I feel comfortable all the same.

I’m a brown person of color but “fair” skinned in South Asian terms, and have been given access to many opportunities that have let me continue to live a comfortable life.

I feel safe and respected when I visit family in India, and if I choose to, it would be easy to put on blinders to dismiss and ignore the inequality around me. That’s the hallmark of privilege.

I don’t deny it. It’s painful and uncomfortable to recognize.

It makes me think with sadness of my beloved grandmother’s actions towards servants and I feel wracked with guilt and shame on reflecting upon my own mimicking of her actions and general ignorance earlier in my life. And at the same time, I recognize the pull to be defensive because for all the historic privilege I may have had within Indian or South Asian spaces, I’ve still been bullied here in America for being Brown and Hindu.

I resist the complacency of defensiveness though, and work to embrace the discomfort.

I do have privilege on certain levels.

I also have, nonetheless, the right and the responsibility to say that the increasing number of calls insisting that caste is fundamental to my religion, and the solution to caste discrimination is to dismantle my religion are wrong, bigoted, and Hinduphobic.

Most recently, a friend who was raised Hindu in a so-called upper-caste family and self-identifies as a community organizer for anti-Hindutva and anti-fascism in South Asia and the South Asian diaspora, called upon Hindus to meditate on the ways that their Hindu identity is grounded in a tradition that is “inherently exclusionary and traumatizing.”

The call was not to reflect on privilege, not to reflect on the actions or attitudes of Hindu generations before us, or those of today’s Hindus, not to try to understand what might be social practices rather than religious.

For caste justice, she insisted, Hinduism — the tradition as a whole — has to be eradicated.

That was her assertion, it seemed, all but stated overtly. 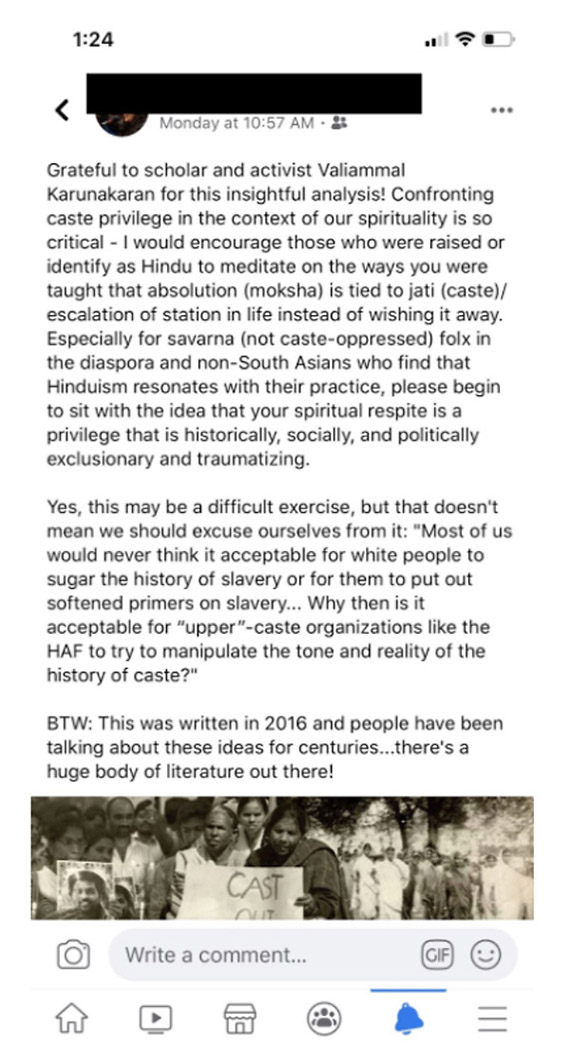 And then just minutes later, this message appeared:  “In my honest opinion, the way for upper caste folks like myself to take part in dismantling caste in its entirety would be to dismantle Hinduism as an organized religion.”

And there it was, a call for self-hatred rooted in ignorance of the Hindu tradition’s fundamental teachings and it’s history of inspiring social reform and upliftment — a most unimaginative view in which there is nothing redemptive in yoga or meditation, the Bhagavad Gita, or the Vedas (which never speak of birth-based hierarchies, barely mention varna and certainly don’t mention jati).

But these were just the latest frontal assaults on Hinduism.

The activist group Equality Labs recently began a campaign of mocking of Hinduism and Hindus, first in blatant taunting of Hindu children during textbook hearings in California when they called Hinduism an “an oppressive social construct” and later in ridiculing campus celebrations of Holi.

Why insist on rooting caste in Hinduism?  Once caste is intrinsic to Hindu practice, the only solution to end discrimination, obvioulsy, is to dismantle Hinduism.

Take it from a co-founder of Equality Labs: 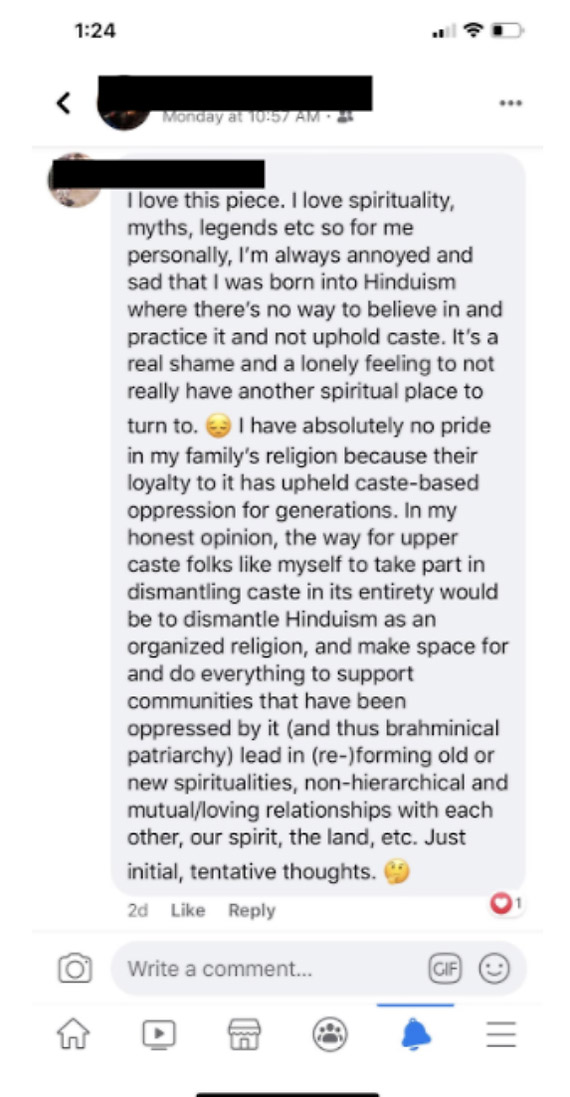 It’s clear that while their activism may have started in the necessary work of Ambedkar on the annihilation of the systems that enable caste-based discrimination, they have moved into something far more destructive, that Ambedkar himself did not ascribe to: that we must all accept that a discriminatory caste system is rooted in Hinduism.

If the argument is that caste-based discrimination is alive and widespread throughout South Asia and must be destroyed, myself and so many devout Hindus like me would be ready allies to join with folks at Equality Labs and others in that fight.

I cannot, however, join in the willful misinterpretation of my religion’s essential teachings, as if they perpetuate social evils.

The most widely revered sacred texts by Hindus are attributed to sages who today would be considered born to “low caste” parentage.

Even in the handful of stories that tell of discriminatory interactions, it is made abundantly clear that it is the individual who discriminates that is the one acting against dharma.

The teachings are as resolute as the problem is real: all beings are inherently divine, and all unjust thoughts, words, and actions are wrong and will reap karmic punishment either in this life or in a future one.

This is why every major Hindu spiritual leader today has called caste-based discrimination a violation of dharma and why some of the most powerful movements to counter the oppressive forces of discrimination have been led by Hindus.

Even B.R Ambedkar, the monumental figurehead of the movement to challenge the systems of caste-based oppression and author of India’s Constitution, who is often quoted by those who seek to annihilate Hinduism, had this to say when reflecting on whether a birth-based hierarchy was intrinsic to the Hinduism:

“Particular attention has to be paid to the fact that this (the varna system) was essentially a class system, in which individuals, when qualified, could change their class, and therefore classes did change their personnel.” (Writings and Speeches, Vol. 1, P.18).

It’s undeniable that caste-based discrimination is practiced throughout South Asia, and it is practiced by members of all religious communities.

This confirms that the inhumanity of caste discrimination is not grounded in Hinduism, but our inherent weaknesses as human beings.

One need only look at other social evils that have often been perpetrated in the name of religion to acknowledge why targeting just Hindus is Hinduphobia.

Christianity was used to justify slavery by white Christians and continues to be used to prey on vulnerable and impoverished indigenous communities through aggressive, predatory, and unethical evangelzing around the world.

Wouldn’t the Reverend Doctor Martin Luther King object to anyone saying that the only way to address the current systemic injustices faced by Black Americans in the United States (and marginalized communities globally) is to dismantle Christianity?

Islam has also been wielded by some to oppress women and carry out terrorist attacks.

Has Malala Yousafzai ever attributed the horrific assault that she faced to Islam, or insisted that gender equality and peace can only be achieved if every Muslim denounced their faith?

We have found ways to acknowledge the trauma and experience of other people who have been oppressed in the name of religion, to give their voices the power and support to bring about awareness and change, without insisting that the solution is to “dismantle” a faith.

Why then do South Asian activists see no hypocrisy in demanding, not that Hindus simply examine their privilege, but that they dismantle their religion?

When did it become okay, nay woke, to openly call to destroy an entire religion?

For Hindus, Hinduism, with its emphasis on the universality of divinity and its ability to lift us above our base weaknesses, is in fact the philosophy to move us forward towards social justice, not a cancer to be cut out of the movement entirely.

Those who amplify Hinduphobic rhetoric, are asking the destruction of Hindu spirituality without offering compelling evidence that this is good for us, for lower caste individuals, or for the world, and are ignoring that the most impactful movements towards change have not come from those who reject spirituality, but by those who have embraced it.

Asking Hindus to sit with the idea that their tradition is inherently exclusionary, rather than inherently, intimately, and inextricably grounded in the idea that all are divine, is NOT the same as asking someone to grapple with and confront their privilege. It is telling them to reject the central value that grounds their relationship with themselves, with everything around them, and with their relationship with that which is greater than them. We are not being asked to reflect on our actions or on our ignorance. We’re being told that we need to see that we are evil by virtue of our spirituality. There is no space to be a good person here.

Being told that my religion is oppressive, is oppression. It is Hinduphobia. It is anti-Hindu hatred.

The response from this segment of activists is predictable: “Kavita is using her privilege to silence the real, painful experiences of a traumatized people by raising her own, and exceptionalizes why savarna voices must go.”

If you’ve made it this far though, hopefully you’ve understood that that’s not what’s happening here.

We have a long way to go in hearing, raising, highlighting the voices of the oppressed, and we must be willing to do this work and transform our world and our societies, no matter how uncomfortable it makes us.

We have both the ability and the duty to use our Hindu dharma to do this very work — to follow a long tradition of using an understanding of universal and shared divinity to challenge not just our personal weaknesses, but to address systems of oppression.