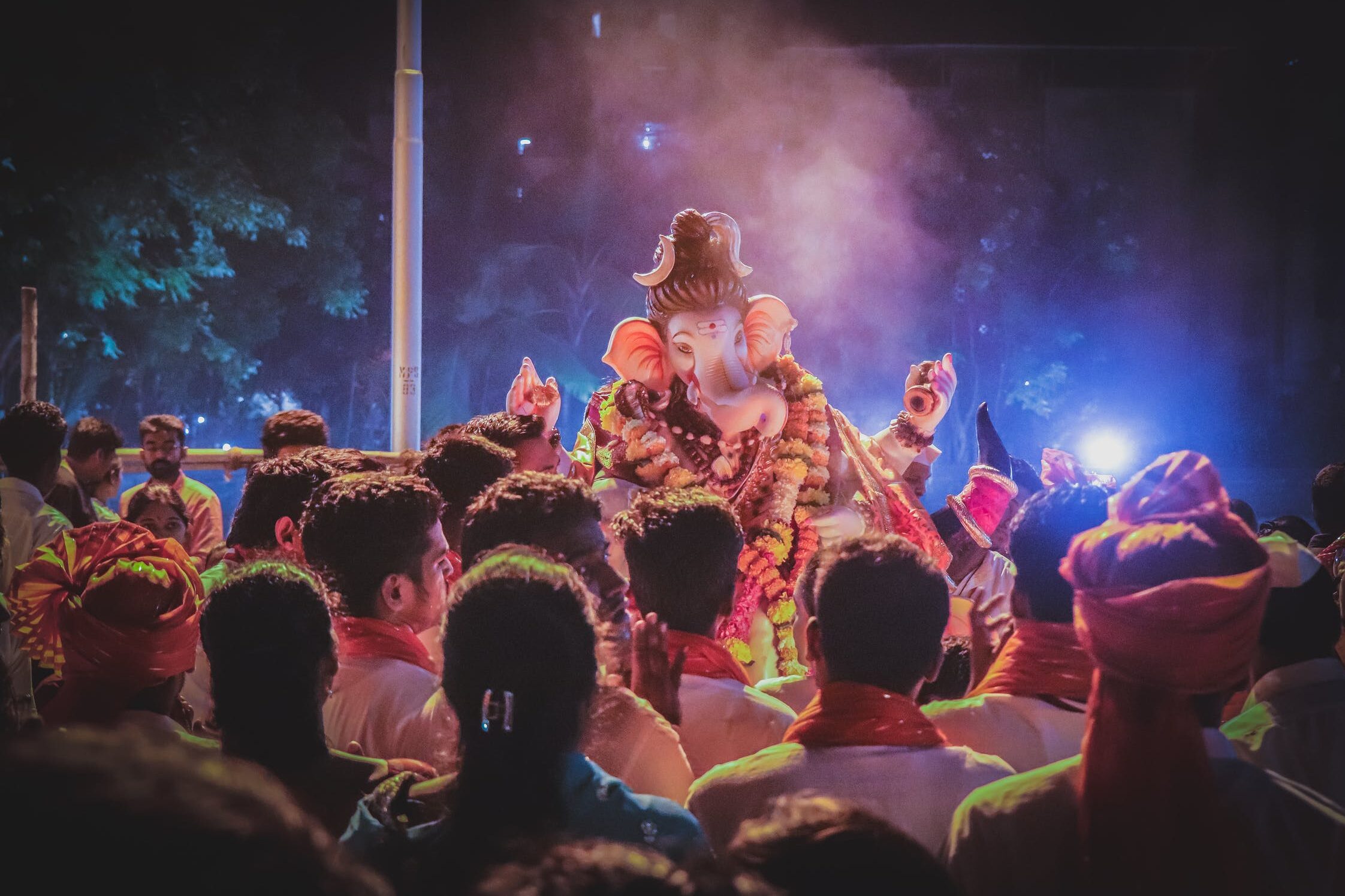 One of Hinduism’s most revered personalities, Ganesha is widely recognized for having the head of an elephant and is the son of Shiva (the God of Transformation) and his wife Parvati.

Every year, his birth is celebrated with a 10-day festival, during which four main rituals, namely Prana Pratishta, Shodashopachara, Uttarpuja, and Ganpati Visarjan are performed.

Festivities begin as Ganesha deities, generally made of clay and decorated with flowers and lights, are set up in private homes and/or temporary public stages called pandals. Priests then conduct Prana Pratishta, a ceremony in which mantras are recited, invoking Ganesha’s presence into the clay deity, after which he is offered formal prayers in a 16-step worship called Shodashopachara.

During each day of the celebration, prasad, or food blessed by the deity, is distributed throughout the community. Followers also meditate on the many aspects of his form, which symbolize deeper spiritual truths, while many choose to observe fasts.

On the last day of the festival, Uttarpuja is performed, a ritual bidding Ganesha farewell. After, he is carried in a public procession with kirtan (devotional music) to a nearby body of water in which he is immersed. This custom is Ganpati Visarjan, and it symbolizes his return to Mount Kailash, a peak in the Himalayas where Shiva and Parvati are said to reside.

Stories vary on how Ganesha got his elephant head.

The most well-known narrative of Ganesha’s birth has to do with a time Parvati wanted to take a bath. Needing someone to stand guard while Shiva was away, she created the figure of a boy, brought it to life, and asked him to watch the entrance, before going in for her bath.

Shiva, however, returned before Parvati finished. Unaware of who the boy was, Shiva became furious when he would not let him pass. A fight ensued, which eventually ended with Shiva cutting off Ganesha’s head.

Discovering what had transpired, Parvati threatened to destroy the Earth and the heavens. Pacifying his wife, Shiva had the head replaced with an elephant’s, bringing Ganesha back to life.

Today, many view his decapitation as a symbol of the transformation one must undergo in order to make significant spiritual progress.

In fact, many other such lessons are associated with Ganesha.

The union of his elephant head and human body, represent how the spirit should live in harmony with nature. His round belly signifies the cosmos, while the snake around his waist is the energy keeping the cosmos together.

His four hands — one holding out a palm to offer blessings, one holding a sweet to reward those who maintain their spiritual disciplines, one with a rope to help pull people toward their spiritual goals, and one with an axe to cut away negative attachments — act as symbols of sacred protection.

And the mouse he rides is like the wandering mind that can only be controlled by the strength of knowledge.

Ganesha is also prominently known as the “remover of obstacles,” and is therefore worshipped by many Hindus for the success of any major endeavor, like marriage or childbirth. He’s especially prayed to for the removal of obstacles on the path of one’s spiritual life. And an invocation to Ganesha is very often the first part of any ritual worship.

Ganesha Chaturthi started being celebrated at least 400 years ago and became the huge celebration it is today in the 19th century.

Though no one really knows exactly how far back in history Ganesha Chaturthi has been observed, some historians believe the festival became a major public event in the 1600s when Indian king, Shivaji Bhosale I, first sponsored the celebration.

The festival is said to have been revitalized later in the 19th century as a symbol of India’s independence movement, by freedom fighter Bal Gangadhar Tilak.

In 1892, the cities of Pune and Mumbai became packed with devotees, despite the fact that such large gatherings were not allowed by the British. The 10-day festival was celebrated with a patriotic gusto fueled by a united deep devotion and love for Ganesha.

To this day, Hindu festivals continue to be celebrated with similar pomp and fervor, signifying the everlasting power such devotion can generate.

For those who wish to delve even deeper into the spirit of the holiday, more info about Ganesha can be found here.